Waters of Salt and Sin by Alisha Klapheke 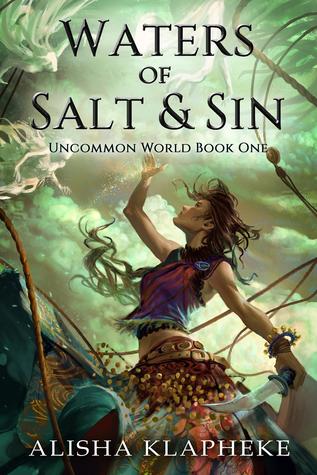 If you like your adventures on the open seas, then this book is tailor-made for you.

Waters of Salt and Sin was such a delightful new fantasy book. I confess that there is always a little bit of hesitation when accepting self-published books for review, simply because of some of my past experiences. I know that that is rather unfounded and unfair, but I do my absolute best to give every self-published author a shot, and I'm normally glad I did — in this case, I'm thrilled that I did.

This story centers on almost-18 Kinneret her younger sister Avigail, and their close friend Calev, who is also almost 18. Kinneret and Avi are now on their own after their parents die from illness, leaving Kinneret in charge of providing for her and her sister with the use of her sailing abilities and her goal to one day become kaptan of her own ship. The special thing about Kinneret is that she is able to perform what is known as salt magic, which basically allows her to control the seas and help her with her sailing.

Klapheke has a great writing style that is both engaging and entertaining. She uses well-developed ideas and thoughts, and also provides many beautiful descriptions of places and scenes. I felt that her descriptions were balanced well and were not overly excessive. I really loved the salt magic concept; I enjoy some well-written elemental-type magic, and I thought she wrote the relationship between Kinneret, the sea, and her magic really well.

The society in this novel is caste-based, and Avi and Kinneret are low-castes, while Calev is high-caste. Practicing magic and getting caught could render one to become an Outcast, so Kinneret tries to keep her abilities a secret. I think Klapheke portrayed this caste-society really well, and she seemed to really capture the stigmas that different caste levels had for one another, along with the power within each caste. She also portrayed the struggles of having a friendship that spans low- and high-castes, which I think brought some good attention to the injustices associated with those that tend to think that they are better than those 'beneath' them. A lot of fantasy books deal with class-systems on some basis usually, but I thought Klapheke had a somewhat unique take on the situation and carried it out really well.

I really liked Kinneret's strong-willed personality, but I loved her ability to make mistakes, let her emotions get the best of her, and overall just be human. She wasn't perfect by any means, but her passion and dedication to saving her sister -- and even at the injustice of the caste system -- really drove her and made her who she is. Avi was also a great character, but she isn't present for a good portion of the book, so I'm not sure that I really have all that much to say about her.

Calev was a good character also, but he bored me just a bit more than he probably should have. He had some personality to him, but I wasn't overly impressed. I was, however, pleased with the timeline of Kinneret and Calev's romance. When the story begins, we learn that they had known each other since they were young children, so nothing felt rushed to me. Kinneret had always had feelings for Calev that she knew could never go anywhere because of their caste-level differences, but of course feelings don't just go away. Klapheke paced this entire aspect really well, and I applaud her for not rushing anything into awkward territories.

Oron, however, was probably my favorite character. He's sort of your typical grumpy sailor guy that liokes to drink and enjoy the company of women, but is also unfailingly loyal and pretty good at heart.

The main issues I had were with how conveniently things tended to work out - for instance, Kinneret's Aunt's involvement just felt a bit too easy when it came to working out certain issues that arose. I also felt as though the emotions and actions of the characters were necessarily explained or to the fullest extent they could have been, or conversely and things were stated that were far too obvious.

Overall, I've given Waters of Salt and Sin four stars!

**I received a copy of Waters of Salt and Sin courtesy of the author in exchange for an honest review, though this in no way affects my review.**

You might also like:
Labyrinth Lost by Zoraida Cordova
Arabella of Mars by David Levine
Sea of Shadows by Kelley Armstrong
Posted by Jordan @ForeverLostinLiterature at 7:30 AM