Book Recommendations: Books Featuring Fathers... The Good and the Complicated 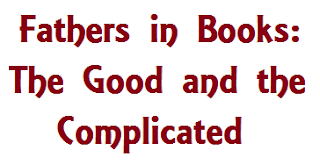 You may recall that for Mother's Day I compiled a list of mothers in literature that have both positive and more complicated relationships with their children, and I have decided to do the same thing for Father's Day!

I'll be honest: this list was hard to compile. I already had enough difficulties with the immense abundance of orphans in literature when  I was creating my Mother's Day list, but as I went through potential book options for Father's Day I realized that there are so many more mother-child relationships featured than father-child -- at least in the books I've read. Fortunately, I was able to find a good selection of books with awesome fathers, not-so-great fathers, and downright questionable ones. Enjoy!

A Conjuring of Light by V. E. Schwab

I was so impressed by Rhy's father, King Maxim, in this book. I feel like it is so rare to find positive father figures in fictional royal families and in fantasy, so this double hit was wonderful. He was strong, had strong ethics, and truly cared for his son and the land he ruled. Definitely a great father figure!

Miranda and Caliban by Jacqueline Carey
I would file Prospero under 'questionable fathers.' He is strict, controlling, and incredibly secretive about his odd research. The relationship between Miranda and Prospero has its ups and downs, but overall I'd say that there are more downs. I liked how well Carey portrayed Miranda's confused feelings regarding her love towards her father -- I thought it was done really well!

I Capture the Castle by Dodie Smith
Cassandra's father is a bit questionable in this book, as well. He is a rather unpredictable man prone to random bits of emotion, and you really never can count on him. It's not a directly negative portrayal, but there is certainly a lot to explore in this father-daughter relationship!

The Girl From Everywhere by Heidi Heilig
This is such a complicated father-daughter relationship. On the one hand, they share a similar passion, but on the other hand, things get a bit dicey when it comes to her father's intentions for doing what he does. I don't want to go into details, but needless to say this is a complicated relationship!

The Hate U Give by Angie Thomas (Review)
I wrote about Star's mom in my Mother's Day post, and I felt compelled to include her dad as well because he's, well, awesome! He was blunt, encouraging, and insanely wise about the world. He imparted so many great lessons and important topics to consider with his children, and I just think his relationship with both his children and his wife were great. Great parent duo in this book!

The Madman's Daughter by Megan Shepherd (Review)
Despite the fact that he is named a 'madman' in the title, this book has yet another complicated father-daughter relationship. Juliet's father abandoned her as a child, so when she tracks him down to find out why, she's met with an... interesting situation. I loved this book!

The Waking Land by Callie Bates (Publication date: June 27th - review coming soon!)
This is a really complicated father(s)-daughter relationship. There's Elanna's biological father and the father who raised her, and she's placed into a position where she has to determine just what each one means to her. This father situation was complicated and very interesting to read about!

Of Metal and Wishes by Sarah Fine
In this book, Wen is her father's medical assistant at a slaughterhouse. Their relationship is tenuous at best and full of incredibly realistic conflicts. I found their relationship to be one of the stronger aspects of this book.

Perfect Little World by Kevin Wilson
This book isn't about just one father, but instead many. I thought this would be a good one to wrap up this list with because of the main idea of the book: communal parenting with nine different couples. The dynamics explored in this story are so interesting to consider, and I thought the father-child relationship dynamics fit well into the complicated (but also positive!) area.

Do you have any books to add to this list? Have you ready any of these? Let me know below!

Posted by Jordan @ForeverLostinLiterature at 7:40 AM