Black and Blue: Inside the Divide Between The Police and Black America by Jeff Pegues 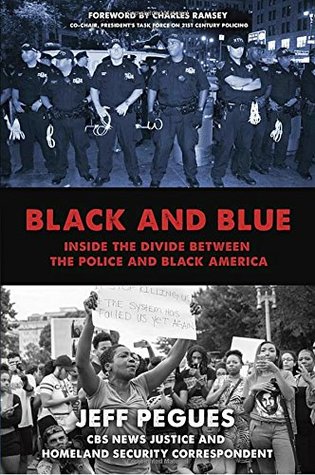 Black and Blue: Inside the Divide Between The Police and Black America by Jeff Pegues. Prometheus Books, 2017. Hardcover, 279 pages.

Black and Blue centers on the tough, complex issue of the conflicts between the black community and police in America, and I commend Jeff Pegues for the in-depth and extremely careful work he has done with this book. Frankly, I was a bit worried before diving into this book: would this be objective? would it be fair? is it legitimate? From what I've read, the answer to all of these questions is 'yes,' along with the fact that this is an extremely well-written book. Pegues presents his research in a flowing, gripping manner that is highly engaging and readable.


Pegues is a CBS News Justice and Homeland Security Correspondent with many years of experience as a reporter, skills which he has used to construct an informative, staggering account of a major problem in the United States. Pegues really did an exemplary job providing fact and statistics regarding those in law enforcement, the black community, and issues of violence and conflict that occur. His many observations and facts regarding conversations he has with those involved in these issues were plentiful and thorough, which I feel provided much invaluable information and insight into why and how this issue has only seemed to have gotten worse over the years.

I greatly appreciated that Pegues presents arguments from both sides, which leads to a broad understanding of the struggles that exist on both of those sides and even how there are not even enough resources available to help tackle some of these issues. He describes how many law enforcement areas do not receive adequate funds to properly train police officers, which leads to many issues. Officers then do not have the ability -- or do not realize the need -- to get to know the community they police in. In addition, he expands on the fact that there is also an extreme lack of discipline among many law enforcement agencies, and much too much leniency regarding the bad cops.

One of the most important points that Pegues notes, however, is the fact that black communities are often neglected and left to fend for themselves, creating a bad cycle of poverty and inability to reach the opportunities and lifestyles of other communities.

This is a hard, frankly depressing read. What I really liked about Pegues' presentation was that although he did provide necessary commentary to bring ideas together, he also largely presented his conversations with people and observations in a manner that really lets the reader draw their own conclusions and understandings (which should be fairly obvious). Pegues was incredibly thorough, touching on every detail that he could think of. The only downside to this was that certain things felt a bit repetitive at times, but hey, I'd rather have repetition than a lack of information. There is no real conclusion that I can deduce from this as far as how to overcome these issues, however.

This book is definitely an eye-opener; even if you, like me, think that you know quite about this situation, there is a lot more to learn and be aware of. Overall, I've given Black and Blue  four stars!

*I received a copy of Black and Blue in exchange for an honest review. This has no bearing on my sentiments towards the book itself.*


You might also like:
Between the World and Me by Ta-Nehisi Coates
What is the What by Dave Eggers

Posted by Jordan @ForeverLostinLiterature at 7:34 AM