I always mean to make posts featuring some of the amazing and generous book mail that I get from publishers, but I always end up just using social media to share it instead. Well, today I'm here to finally rectify that!

The lovely folks over at Orbit have been so good to me lately, and because of that I wanted to share some of the fantastic new books I've received that I'll be reading and reviewing for you all here on the blog! As I've already said numerous times this month, fantasy releases this year have been absolutely incredible, and a lot of the fantastic ones that I've read have been published by Orbit (in addition to many other great publishers, such as Tor). Some of these are backlist titles, but a fair few are new and upcoming releases as well, so be sure to keep your eye out for these ones! 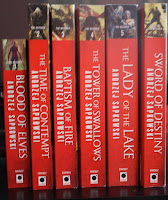 Soul of the World by David Mealing
Review
"It is a time of revolution. In the cities, food shortages stir citizens to riots against the crown. In the wilds, new magic threatens the dominance of the tribes. and on the battlefields, even the most brilliant commanders struggle in the shadow of total war. Three lines of magic must be mastered in order to usher in a new age, and three heroes must emerge.
Sarine is an artist on the streets of New Sarresant whose secret familiar helps her uncover bloodlust and madness where she expected only revolutionary fervor.
Arak’Jur wields the power of beasts to keep his people safe, but his strength cannot protect them from war amongst themselves.
Erris is a brilliant cavalry officer trying to defend New Sarresant from an enemy general armed with magic she barely understands.
Each must learn the secrets of their power in time to guide their people through ruin. But a greater evil may be trying to stop them."

Mageborn by Stephen Aryan
Review TBA
Release date: October 3rd
"Fear of magic is intensifying across the west. Morgan, a former Guardian of the Peace, believes the eradication of magic will lead to stability and lasting world peace. He will do anything to achieve his goal, even if it means murdering every child born with magical ability.
The Red Tower is their last hope. Sheltered from a world that fears them, the students there are taught to control their wild and powerful gifts. But unrest is stirring both outside the walls of the Red Tower and within."

The Tethered Mage by Melissa Caruso
Review coming October 23rd!
Release date: October 24th
"In the Raverran Empire, magic is scarce and those born with power are strictly controlled — taken as children and conscripted into the Falcon Army.
Zaira has lived her life on the streets to avoid this fate, hiding her mage-mark and thieving to survive. But hers is a rare and dangerous magic, one that threatens the entire empire.

Lady Amalia Cornaro was never meant to be a Falconer. Heiress and scholar, she was born into a treacherous world of political machinations.
But fate has bound the heir and the mage. And as war looms on the horizon, a single spark could turn their city into a pyre."

The Crown Tower by Michael J. Sullivan
Review TBA
Backlist - 2013
"Two men who hate each other. One impossible mission. A legend in the making.

Hadrian Blackwater, a warrior with nothing to fight for, is paired with Royce Melborn, a thieving assassin with nothing to lose. Hired by an old wizard, they must steal a treasure that no one can reach. The Crown Tower is the impregnable remains of the grandest fortress ever built and home to the realm’s most prized possessions. But it isn’t gold or jewels that the wizard is after, and if he can just keep them from killing each other, they just might succeed."

The First Watch by Dale Lucas
Review TBA
Release date: July 11th
"A watchman of the Yenara City guard has gone missing. The culprit could be any of the usual suspects: drug-dealing orcs, mind-controlling elves, uncooperative mages, or humans being typical humans.

It’s up to two reluctant partners — Rem, a hungover miscreant who joins the Watch to pay off his bail, and Torval, a maul-wielding dwarf who’s highly unimpressed with the untrained and weaponless Rem — to uncover the truth and catch the murderer loose in their fair city."

The Blade Itself by Joe Abercrombie
Review TBA
Backlist - 2006
"Logen Ninefingers, infamous barbarian, has finally run out of luck. Caught in one feud too many, he’s on the verge of becoming a dead barbarian — leaving nothing behind him but bad songs, dead friends, and a lot of happy enemies.

Nobleman, dashing officer, and paragon of selfishness, Captain Jezal dan Luthar has nothing more dangerous in mind than fleecing his friends at cards and dreaming of glory in the fencing circle. But war is brewing, and on the battlefields of the frozen North they fight by altogether bloodier rules.

Inquisitor Glokta, cripple turned torturer, would like nothing better than to see Jezal come home in a box. But then Glokta hates everyone: cutting treason out of the Union one confession at a time leaves little room for friendship. His latest trail of corpses may lead him right to the rotten heart of government, if he can stay alive long enough to follow it.

Enter the wizard, Bayaz. A bald old man with a terrible temper and a pathetic assistant, he could be the First of the Magi, he could be a spectacular fraud, but whatever he is, he’s about to make the lives of Logen, Jezal, and Glokta a whole lot more difficult.

Murderous conspiracies rise to the surface, old scores are ready to be settled, and the line between hero and villain is sharp enough to draw blood."

Blood of Elves by Andrzej Sapkowski + the rest of the series
Review TBA
The Last Wish Review
"For over a century, humans, dwarves, gnomes, and elves have lived together in relative peace. But times have changed, the uneasy peace is over, and now the races are fighting once again. The only good elf, it seems, is a dead elf.

Geralt of Rivia, the cunning assassin known as The Witcher, has been waiting for the birth of a prophesied child. This child has the power to change the world – for good, or for evil.
As the threat of war hangs over the land and the child is hunted for her extraordinary powers, it will become Geralt’s responsibility to protect them all – and the Witcher never accepts defeat."


The Two of Swords Vol. 1 by K.J. Parker
Review TBA
Release date: October 17th
“Why are we fighting this war? Because evil must be resisted, and sooner or later there comes a time when men of principle have to make a stand. But at this stage in the proceedings,” he added, with a slightly lopsided grin, “mostly from force of habit.”\
A soldier with a gift for archery. A woman who kills without care. Two brothers, both unbeatable generals, now fighting for opposing armies. No one in the vast and once glorious United Empire remains untouched by the rift between East and West, and the war has been fought for as long as anyone can remember. Some still survive who know how it was started, but no one knows how it will end. Except, perhaps, the Two of Swords."

Have you read any of these or are you looking forward to any of these!? Let me know in the comments!

*This is not a sponsored post. I just really like Orbit books so far.
**All synopsis from Hachette/Orbit