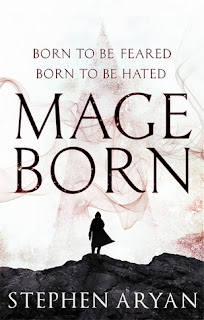 Mageborn is the first book in Stephen Aryan new epic fantasy series, Age of Dread. The plot was interesting and the entire premise had me hooked: one man, Habreel, believe that all magic should be eradicated after a war that occurred ten years ago caused extreme loss and mayhem by magic users.. In general, it's not the most unique or inventive idea I've ever heard, but the execution was done in a fascinating manner that allowed the reader to follow multiple POVs from every side, thus giving a better overall picture of the events of the book. Aryan also introduced his own inventive ideas that help this book stand out. (Note: Since finishing the book, I have discovered that Aryan's first series, written prior to this one, includes the war and backstory to much of the events in this book, though it is not necessary to read that one first--I hadn't.)

Speaking of multiple POVs: there are a quite a few. If I'm counting correctly, there are six main POVs: Habreel, Akosh, Tammy, Munroe, Wren, Tianne. Along with these are a few minor POVs that pop up, but aren't repeated much. I liked getting in the head of each of these characters and for the most part I felt that Aryan developed each of them very well. Habreel is one of the more interesting characters because, although he isn't necessarily doing 'right' things, as a reader we can understand where his thought process comes from in relation to his now seemingly drastic actions, which makes him difficult to place into a 'good' or 'bad' box. Akosh, however, is brilliantly written as a rather ruthless, uncaring woman--one which I would not want to run into, but also one which I am immensely intrigued by. Tammy and Munroe are also really well-written female characters, though I will be honest and say that I mixed them up a few times, simply because they are both strong woman who know how to kick ass and therefore sort of seem similar at times. Wren and Tianne are two students at the Red Tower, and I really enjoyed seeing each one's insight into the happenings that occurred at the Red Tower, the other students, and the instructors.

My only small niggle in regards to that characters is that wish that Aryan had maybe spent a little bit more time on individual characters and not had quite so many POVs to jump right into, but I do see how the multiple viewpoints really added to the story as well.

Where this book lost me was its lack of depth and passion. It's hard for me convey this because I can't really complain about any specific aspects of the book--the characters were well-developed, the plot had plenty of intrigue--but there was just something missing. Some of the dialogue felt a bit too 'perfect' or clunky, for one. I also felt that many actions were too predictable--such as what a character would say or do in reaction to something. There are plenty of unexpected twists and surprises, but there also many predictable surprises to go with that. Things felt very forced, neat, and far too tidy for it to feel realistic enough to become fully immersed in the story.

IN addition to what I've just said, the worldbuilding itself was lacking too much for my liking. I had a general idea of what things were like, but there was really no development or explanation for what type of world this was. As mentioned, I have since discovered that Aryan has a previous series that features many of the characters from this new series that provides much more background about the characters, the world itself, and the magic system, so that does help me understand a bit more why this book didn't go into as much depth. That being said, if this is considered a series that you can read without reading previous does (which I'm fairly certain that is how it's being marketed, but I could be wrong), then you might find yourself wanting more from this world.

Also, this is a minor detail, but an important one--I wanted a map so badly! Growing up, I never understood or used maps when reading fantasy, but over the past few years they have become indispensable to me and I feel that Mageborn could have majorly benefited from having one. I'm not counting this against the book or in my rating, but it's just a minor quibble of mine.

Overall, I've given Mageborn three-and-a-half stars! Despite it falling short of being on par with some of the great epic fantasies, Mageborn is still a solid, decent read that I would still recommend to any fantasy fan. I will probably check out the next book as well to see what happens and if there are any improvement, and I might also go back and check out Aryan's previous series, which is supposedly better than this one.

**I received a review copy of Mageborn courtesy of Orbit in exchange for an honest review. This has no effect on my rating or enjoyment of the book.**

You might also like:
Soul of the World by David Mealing
The Tethered Mage by Melissa Caruso
Posted by Jordan @ForeverLostinLiterature at 7:33 AM