Waiting on Wednesday: A Time of Dread by John Gwynne 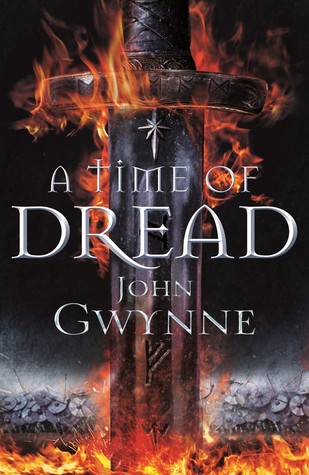 "Acclaimed epic fantasy author John Gwynne returns to the Banished Lands in the first book of a new trilogy.
The Ben-Elim, a fierce race of warrior-angels, burst into the Banished Lands over a hundred and thirty years ago. They were in pursuit of their eternal enemy, the Kadoshim demon-horde. On that day a great battle was fought, the Ben-Elim and Kadoshim joined by allies from the races of both men and giants, and a great victory was won.
Now much of the Banished Lands is ruled by the Ben-Elim, who have made this world their home, extending their influence and power as they swallow ancient kingdoms into the protective grasp of their ever-extending borders. But peace is fragile within the realm and the Kadoshim that remain are now amassing on the edges of the empire....Threats long in the shadows are about to strike."

First off, A Time of Dread is such a fantastic title it's ridiculous; I love the entire atmosphere this title and cover produce. I am loving the sound of this synopsis. It doesn't really give a whole lot to go off of, but I am really liking the direction it's headed.  I've also been hearing some pretty great things about Gwynne's other fantasy series, The Faithful and the Fallen, which I hope to read sometime soon!