The Toymakers by Robert Dinsdale

*The Toymakers is now available!* 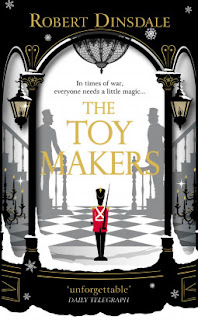 Oh, this book. I am truly not even sure where to begin.

This is officially going on my list of all-time favorites.

This is the first book that I have ever read by Robert Dinsdale and it absolutely will not be the last. It also says on the back flap 'about the author' section that this is Dinsdale's first foray into magic--I certainly hope it will not be the last because he clearly has immense talent. The Toymakers filled me with so much hope, sadness, and awe--my emotions were all over the place with this book, and I felt filled with a deep sense of compassion throughout for all of the characters in this book. This was such a cozy book as well, and I wanted nothing more than to just curl up on a rainy day (which, unfortunately, we don't get many of here in Southern California) and read this wonderful story.

The Toymakers is an incredibly poetic, deeply moving novel that takes place in a toy shop in London.
Summarizing this book in any way feels nearly impossible for me, but I will do my best. Our story begins with a young girl named Cathy who finds herself in a troublesome predicament and decides to run away. She ends up at Papa Jack's Toy Emporium, a dazzling, truly magnificent toy store that is everyone's most anticipated part of the holidays--and probably the highlight of the year for many people. The store is owned by Papa Jack, a rather seclusive bear of a man who lives in the store itself where he crafts toys, along with his two sons, Emil and Kaspar. Shop hands at the Emporium are hired only on a seasonal basis while the store is open are sent back into the regular world in the spring and summer months while Papa Jack and his sons work on toys for the next holiday season.

As beautiful as all of this sounds, there are of course some dysfunctional aspects within the brothers' relationship and the way in which the store is run. There is intense rivalry that borders on obsession between Emil and Kaspar, and much of this story explores how that has shaped both brothers' entire lives and the events of the store. Emil is the younger brother, and as such often feels overshadowed by his brother's work and abilities to create toys seemingly more magical that his own. Kaspar, unlike Emil, is an outspoken, confident boy who is always innovating to make a toy better than the previous year's most popular item. Although Cathy is our protagonist, I would argue that this story is as much about them as it is her, and I was completely enthralled in every turn of their lives.

Cathy begins as a rather meek, shy girl who knows that she must do what she can to take care of herself in her new world, but she eventually develops into much, much more than even she knew she had in her. I don't want to share too much about Cathy or anyone else's journeys, however, because I want you to pick up this book yourself and explore it on your own. You won't be disappointed.

The Emporium itself is one of those rare places created in literature that I would give anything to be able to visit. Dinsdale has created a place that sounds incredibly magical and that would be the perfect pace to forget your own worries and, well, be a kid again even if have long been an adult. This is, in fact, a large theme that persists throughout this book: everyone has that ever-curious, ever-imaginative child within themselves, always lingering in their soul and ready to burst out again when the moment calls for it. Dinsdale's descriptions were so vivid and so imaginative that I couldn't help but just fall in love with this setting, complete with magical trees, patchwork animals, and toy soldiers that seem just a bit too real.

This book takes a rather unexpected turn about three-quarters of the way through, but it is a truly inventive, curious turn that I guarantee will keep you interested and only further your interest in this magical book. There is also a larger aspect of this book involving the struggles and wars occurring around them, as well as Papa Jack's own difficult and harrowing experiences before opening his toy store.

The Toymakers is just so heartfelt, heartbreaking, and impossible to put down. I fell in love with many characters and had so many emotions about every single one. I will definitely be re-reading this book around Christmas. And at least one family member or friend will be receiving this book as a Christmas gift. Because, well, I can't not share it.

Overall, I've given The Toymakers a five (plus!) star rating. (And look, I'm not trying to tell you what to do or anything and you can exercise your own free will, but you should really read this book. It's fantastic. I promise.)


You might also like:
The Heart's Invisible Furies by John Boyne
The Queen of the Night by Alexander Chee
Heartless by Marissa Meyer
The Language of Thorns by Leigh Bardugo
A Face Like Glass by Frances Hardinge
Posted by Jordan @ForeverLostinLiterature at 7:22 AM