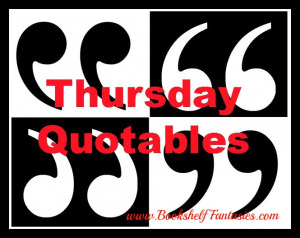 Today I decided to jump in and join Bookshelf Fantasies with their weekly blog meme, Thursday Quotables! The purpose of Thursday Quotables is to share any line, passage, or quote from a book you are currently reading. I am always marking up lines and passages in books I'm reading, so I though that this might be a fun meme to participate in.

This week, I chose a quote from Master Assassins by Robert V.S. Redick. This book is amazing so far and I am completely hooked on it, so I decided to share three of the many passages/quotes I've marked while reading it. I'm only about halfway through, so I'm sure there will be more to come. I will definitely be posting a review for this one once I'm finished, so keep an eye out for that!

"Fear is idleness, fear is sand blown under the door. But are we helpless, that we cannot seal the crack beneath the door?...Like that whisper of sand, death seeps in through the crevice of fear." (Loc 759)

"She felt too much, knew too much, she had a fullness of heart that left him shocked and sorry for lesser people, grown men and women included. " (Loc 963)

"The astonishing thing is how little it takes to seal one's fate. A blind fumbling around the wall of a latrine. A ground-hugging slither under the fishhook-tree fence, a scramble through the oily brush in the bottom of the trench. A few moments of almost suicidal blundering, their packs caught on brambles, items falling from their pockets, sticks loudly snapped underfoot. Curses, hysterical giggles. Shut up, brother." (Loc 1170) 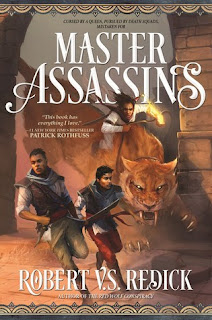 "Two village boys mistaken for assassins become the decisive figures in the battle for a continent in the thrilling new desert-based epic fantasy by the author of The Red Wolf Conspiracy.

Kandri Hinjuman was never meant to be a soldier. His brother Mektu was never meant for this world. Rivals since childhood, they are drafted into a horrific war led by a madwoman-Prophet, and survive each day only by hiding their disbelief. Kandri is good at blending in, but Mektu is hopeless: impulsive, erratic—and certain that a demon is stalking him. Is this madness or a second sense? Either way, Kandri knows that Mektu’s antics will land them both in early graves.

But all bets are off when the brothers’ simmering feud explodes into violence, and holy blood is spilled. Kandri and Mektu are taken for contract killers and must flee for their lives—to the one place where they can hope to disappear: the sprawling desert known as the Land that Eats Men. In this eerie wilderness, the terrain is as deadly as the monsters, ghouls, and traffickers in human flesh. Here the brothers find strange allies: an aging warlord, a desert nomad searching for her family, a lethal child-soldier still in her teens. They also find themselves in possession of a secret that could bring peace to the continent of Urrath. Or unthinkable carnage.

On their heels are the Prophet’s death squads. Ahead lie warring armies, sandstorms, evil spirits and the deeper evil of human greed. But hope beckons as well—if the “Master Assassins” can expose the lie that has made them the world’s most wanted men."
Buy the book: Amazon | Book Depository


I am also an Amazon affiliate, so if you'd prefer to shop through Amazon, just click the banner on the upper right hand side of my blog! (above the 'Follow by email' box, you may need to pause adblock to see it!)
Posted by Jordan @ForeverLostinLiterature at 7:18 AM