To the Bright Edge of the World by Eowyn Ivey 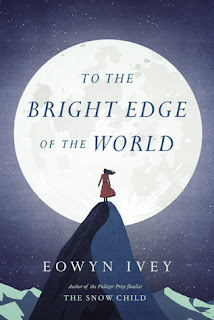 I've had To the Bright Edge of the World sitting around in my room for quite a while, always piquing my interest with that beautiful cover, but I never brought myself to actually pick it up until now.

To the Bright Edge of the World is told mainly in diary entries by Colonel Allen Forrester and his wife, Sophie Forrester. Among these diaries entries are also letters from two people in the present day, as well as additional letters, photographs, artifacts, and other occasional documents that add to the story. The story begins with Allen embarking on an exploration through the previously impassable Wolverine River, while his new wife Sophie spends her time at home, newly pregnant and embarking on her own personal explorations.


This was honestly such a beautiful story. It is what I would call a 'quiet' novel. It's not over-the-top or overly dramatic, but instead it is smooth, subtle, and full of depth. There is a large element of romance in this book in addition to the exploration of the Alaskan wilderness--after all, Allen and Sophie are still newlyweds--and I felt that the way it shined through in this book was just so beautiful. The two may never be in the same space together at any point in this novel, but their passion and commitment are so obvious that it feels as if they are. I would also say that there is a romance between Allen and the wilderness, between Sophie and her passion for birding.


I noticed a similarity between Allen and Sophie's characters in the sense that they both are very practical people and tend to brush off the superstitious fancies of those around them. Despite this, they each have some encounters that seem to lend credence to the superstitions of those around, which forces them to reconsider their own preconceived notions and, in my opinion, further develops their characters in a positive way. The raven, in particular, is a symbol that is found many times throughout this book that I kept my eye out for and found particularly clever. Ivey captures the voice of Allen and Sophie so well, giving them each very distinct voices, but also voices that work so well together. So many sentiments and themes are echoed within each one's narrative that only proved to me how talented Ivey is as a writer. Ivey was clearly born to write and tell stories, and she does it so well in this book.

Among the discoveries and many exciting aspects of this book, there is also an almost continuous sense of intrigue. There is nothing overtly obvious or prominent, but there always hints that certain things that might be more than what they appear, or odd coincidences that make one wonder just what is happening. The stories and folktales that the Alaskan Natives tell Allen and his crew as they explore the natives' land only adds to this incredible, mystical atmosphere.

In regards to the Alaskan Native, I really liked the dynamic that Ivey created between Forrester and his crew and the natives. She seems to have successfully incorporated the same amount of prejudice and skepticism that the white Americans had towards Native Americans at that time while also creating a narrative that gives an understanding of how the tensions and relations between Americans and the Natives were built. They were invaders into the natives' homeland, and the natives very much resented them for that (understandably) and thus many treated them with great distrust. The way the relationships develop and also stay the same in some cases between different tribes and individuals was really well-written and offered a keen insight into this subject.

In addition, I really savored Allen's descriptions of his explorations. There are times when he describes the various images and scenery that his crew has discovered and it is just so apparent that he has a passion for explorations and the land itself, and it even makes me want to travel up to Alaska even more and experience the beauty for myself. Ivey also captures well the fears, the struggles, and the bleakness that often overtook Allen and his crew as they made their journey, but within the despair and feelings of loss, there was always a faint glimmer of hope dangling for the men to hold onto.

Overall, I've given To the Bright Edge of the World five stars! If you love well-written prose, books of exploration--both personal and otherwise--then I highly recommend you pick up this book.

Email ThisBlogThis!Share to TwitterShare to FacebookShare to Pinterest
Labels: book, book review, books, eowyn ivey, to the bright edge of the world