Sky In the Deep by Adrienne Young

*Sky in the Deep will be published, Tuesday, April 24th!* 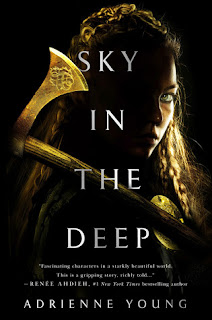 Sky in the Deep was a decent book overall, but personally it was mostly a huge disappointment as well. I was highly anticipating this Viking book with an awesome female lead and plot that made me curious, so when I received an ARC of this title from NetGalley I was beyond thrilled. But then I started reading it and I felt myself becoming more and more disappointed as each page went by.

It really pains me to have a write this review because of how disappointed I was. The biggest problems I had with this book were that, for me, it was dry, boring, and fairly predictable. The plot itself just felt very flat and really lacked anything deep enough to captivate me. There really was only one major plot line happening and a few minor others, but none of them held much weight for me and I found it slightly cliche'd. I wanted a lot more depth regarding the world and the clans and the people within them. I think part of the problem is that we spend so little time with Eelyn in her blood Aska clan in the beginning and almost immediately jump to her being with the enemy Riki clan. Because of this, we're left with very little feelings or loyalty towards the Aska, so I didn't really feel the same hatred or frustrations as she did being towards the Riki while she was in their clan. There just wasn't enough given to the reader in the way of varying perspectives to fully understand just how dramatic and difficult this entire plot and situation was for Eelyn and the Riki clan members.

The  main character, Eelyn, came across a cardboard character to me with very little personality. I had zero connection to her and I felt like I didn't know her at all, which also left me not really caring about her. She was also incredibly close-minded to pretty much everything and it drove me crazy how judgmental she was and how she refused to even think about deeper reasons for why certain events might happen; if it wasn't something she thought was right, she shut her mind and stuck to her stubborn ways. It was beyond frustrating listening to her thoughts throughout the entire story. Spoiler:
Then, when she finally decides to overcome the hatred between the two clans, she becomes upset with her father and friend for not immediately understanding it as well! It was beyond hypocritical.


Many of the other characters, such as her brother, Iri, were also not all that captivating and didn't do much for me to care about them, but there were a few that stood out. Inge and Myra, for example, were two characters that I liked so much more than Eelyn. I think a story about Myra would be fascinating, or even a story about Inge's backstory and how she is who she is today. I found them to have much more well-rounded and developed personalities than Eelyn, and I would have liked to know more about people like them.

Sky in the Deep had extremely odd pacing as well. There were bursts of action and violence in the beginning, a few briefs moments in the middle, and one more brief burst at the end. And in between the violence was... not much else. I don't mind books where there's nothing really going on, but there has to be good character development or at least something going on in the meantime, and that just didn't happen in this case. The other issue I had was with the romance between our main character and another character. It was just unnecessary. I know it was meant to show how Eelyn's character develops, but it just wasn't a great way to do that. I actually wish the romance had been between two other characters if it was necessary to have some romance, but I don't want to go into detail on my opinions there due to potential spoiler issues.

Despite the negative aspects, I did find the battle scenes really well written and I could actually follow them pretty easily, which was a nice surprise. And although Young's writing style wasn't overly gripping for me, I did appreciate her strong attention to detail throughout the book.

Overall, I've given Sky in the Deep 2.75 stars., rounded up to three. I really liked the Viking setting and that aspect, but I just wish it had been executed better. This story was lacking so much depth, and I'm really pretty disappointed by that. I realize that I'm in the minority on this one.

*I received a copy of Sky in the Deep courtesy of NetGalley and Wednesday Books in exchange for an honest review. This has no effect on my rating of the book.*

You might also like:
And I Darken by Kiersten White
An Ember in the Ashes by Sabaa Tahir
Posted by Jordan @ForeverLostinLiterature at 7:28 AM