I am so excited to be able to be part of this blog tour for West, the long-anticipated sequel to East, which came out back in 2005! I read the first book when I was a young girl, so I am thrilled to see the story continuing and that a new generation can explore these books for the first time as well. I have a review to share and a giveaway to share at the bottom as well! 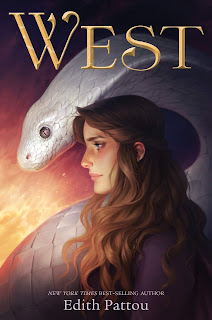 In the sequel to the beloved high fantasy East, Rose sets off on a perilous journey to find her true love when he goes missing in a thrilling tale of danger, magic, adventure, and revenge.

When Rose first met Charles, he was trapped in the form of a white bear. To rescue him, Rose traveled to the land that lay east of the sun and west of the moon to defeat the evil Troll Queen. Now Rose has found her happily-ever-after with Charles—until a sudden storm destroys his ship and he is presumed dead. But Rose doesn’t believe the shipwreck was an act of nature, nor does she believe Charles is truly dead. Something much more sinister is at work. With mysterious and unstoppable forces threatening the lives of the people she loves, Rose must once again set off on a perilous journey. And this time, the fate of the entire world is at stake.

Review:
As I mentioned, East came out way back in the day (okay, I'm exaggerating a little, but it's been a while!), and I read this only a couple years after its release when I was still a young girl. I fell in love with the magical quality of the world and the writing and knew I had to re-read it before diving into the long-awaited sequel (which I didn't know what going to be a thing!), West.

East is an imaginative retelling of the fairy tale "East of the Sun and West of the Moon," and is told with alternating viewpoints that allow the reader to experience the story from many different perspectives, including the polar bear himself. Because of how much I fell in love with all those characters, it was such a wonderful feeling to dive back into this magical world and the wonderful writing of Edith Pattou in West.

The sequel picks up some time after East and Charles is presumed dead after a horrible shipwreck--Rose, however, does not believe that he could truly be dead. Thus begins yet another adventure that takes readers on an unexpected journey that is hard to turn away from.

Just as in East, there are multiple perspectives that we once again get to explore. The POVs jump around quite a bit so the reader is always kept on their toes, which only seemed to heighten the excitement of the story. This is a large book, clocking in at just over five hundred pages, so it does take some patience to sit with the story and let it all play out, but every page is beautifully written and full of plot twists and adventure.

What I loved most about this book was how well Pattou mixed adventure, fairy tale, and legend into one exciting and engaging story. Rose is a fantastic protagonist and a great example of continuous resilience and a determination to never give up. There are a lot of hurdles thrown her way, both from her experiences in East and now those in West, which makes her an admirable figure to watch as she handles everything in her life.

I don't want to go into too much detail regarding the plot details of West so as to avoid any spoilers for those who are new to these books and have yet to read East, so suffice to say that this is a fantastic sequel full of everything I'd hoped and more. Overall, I've given West 4.5 stars!

Edith Pattou is the author of Ghosting, a contemporary novel for young adults, told in free verse. She also wrote three award-winning fantasy novels for young adults – East, a retelling of the Norwegian folk tale "East of the Sun and West of the Moon," and the two Songs of Eirren, Hero’s Song and Fire Arrow. She is also the author of the New York Times bestselling picture book, Mrs. Spitzer’s Garden.

She was born in Evanston, Illinois, grew up in Winnetka, and was a teenager in the city of Chicago where she attended Francis W. Parker School. She completed her B.A. at Scripps College in Claremont, California where she won the Crombie Allen Award for creative writing. She later completed a Masters degree in English Literature at Claremont Graduate School, followed by a Masters of Library and Information Science at UCLA.

She has worked for a medical association, a clothing boutique, a recording studio, the Playboy Foundation, a public television station, a school library, two public libraries, two advertising agencies, and two bookstores.

Rose has always been different.

Since the day she was born, it was clear she had a special fate. Her superstitious mother keeps the unusual circumstances of Rose's birth a secret, hoping to prevent her adventurous daughter from leaving home... but she can't suppress Rose's true nature forever.

So when an enormous white bear shows up one cold autumn evening and asks teenage Rose to come away with it--in exchange for health and prosperity for her ailing family--she readily agrees.

Rose travels on the bear's broad back to a distant and empty castle, where she is nightly joined by a mysterious stranger. In discovering his identity, she loses her heart-- and finds her purpose--and realizes her journey has only just begun.


Giveaway:
Three winners will receive a finished copy of WEST, US only!