Review: In the House in the Dark of the Woods by Laird Hunt

*In the House in the Dark of the Woods will be published Tuesday, October 16th!* 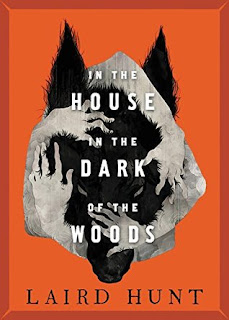 In the House in the Dark of the Woods by Laird Hunt
Little, Brown and Company, 2018
Hardcover. 224 pages.

About In the House in the Dark of the Woods:


"'Once upon a time there was and there wasn't a woman who went to the woods.'"

In this horror story set in colonial New England, a law-abiding Puritan woman goes missing. Or perhaps she has fled or abandoned her family. Or perhaps she's been kidnapped, and set loose to wander in the dense woods of the north. Alone and possibly lost, she meets another woman in the forest. Then everything changes.

On a journey that will take her through dark woods full of almost-human wolves, through a deep well wet with the screams of men, and on a living ship made of human bones, our heroine may find that the evil she flees has been inside her all along. The eerie, disturbing story of one of our perennial fascinations--witchcraft in colonial America--In the House in the Dark of the Woods is a novel of psychological horror and suspense told in Laird Hunt's characteristically lyrical prose style. It is the story of a bewitching, a betrayal, a master huntress and her quarry. It is a story of anger, of evil, of hatred and of redemption. It is the story of a haunting, a story that makes up the bedrock of American mythology, but told in a vivid way you will never forget."

This was an odd little book, but it was also a good one. This is going to be a shorter review because there really just isn't a lot to review. Although there is a plot and there are a few main characters, this is a book much more focused on the themes, symbols, and overarching story. In the House in the Dark of the Woods is written with a strong folktake-esque style that reads very much like a classic tale, which makes it difficult to speak directly of and analyze the characters and plot itself.

I can, however, speak to Hunt's writing style and how he makes this story so engaging. This book is brimming with magic, seemingly both innocent and overflowing with evil and ambiguity. There's a constant darkness that permeates the atmosphere at all times, but somehow this book still didn't feel quite as dark I as I had hoped it would be. Looking back on it, it feels darker than it seemed while I was reading it, if that makes sense, but I still found it very unsettling due to the constant sort of unease and sense of 'this isn't quite right' feeling present while reading it.

The main characters we meet are our protagonist, a woman known as 'Goody' for this story, Eliza, Granny Someone, and Captain Jane. All are women with their own goals and desires that lead them to the various roles that they play. I enjoyed meeting these women and seeing how their role would play into the storyline and I especially loved how each seemed to have both light and darkness lurking within them. Goody's husband and child are also mentioned many times throughout the book in a way that made it seem as though she was steadfastly loyal to them, but that she didn't particularly care for them, either. There are a lot of interesting dynamics at play between the various characters that made for an intriguing story.

I didn't love this book quite as much as I expected to and I did feel slightly lost at various points, but it was still an interesting enough story for me to follow along and enjoy. There is a lot of symbolism to unpack, as well as a lot of reading between the lines to fully understand hidden meanings and actions on behalf of the characters. For me, the ending was probably the best part of this novel--it was clever, revealing, and added an even darker and more ominous tone that the rest of the book already had. All in all, I would recommend this book for anyone looking for a dark folktale-esque to dive into this fall.

Overall, I've given In the House in the Dark of the Woods four stars!

*I received a copy of In the House of the Dark of the Woods courtesy of Little, Brown in exchange for an honest review. This has no effect on my rating of the novel.*