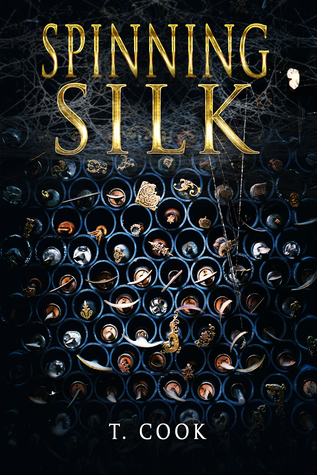 Where to begin in reviewing this book? I wasn't sure what type of story to expect from this book, but I was pleasantly surprised by what I read. Spinning Silk is a surprisingly dark, haunting story that weaves together a story I never predicted and with characters whose stories I was fascinated to know more about.

Spinning Silk is a rather slow-paced book that is more focused on the characters and character development than it is on a fast, forward-moving plot. If you're someone who prefers an action-driven narrative, then this might not be your cup of tea, but if you don't mind a slower plot that is told at a much more leisurely rate and focuses on the journey of individual characters, then Spinning Silk is a great book for that.

As much as I generally enjoy some strong, in-depth world-building, I really liked the simplicity in her world-building. It was obvious that there was Japanese influence and that it is not quite the same world that we live in, but there isn't too much extraneous detail about the world and land itself. I think this worked well because it places more emphasis on the characters, the plot, and themes more than the intricacies of the world, which weren't as crucial in this story.

Another stand-out area of this book is the prose and writing style itself. There is a simplicity to the writing that makes the story flow very naturally, but it is not done in a casual or careless way, as the writing is still very deliberate and eloquently written. It's a quiet story, but still gripping in a way that made me really enjoy this book

The main character is a young woman named Furi, and despite the fact that the story follows her very closely throughout the story, I can't say that I ever particularly connected with her. There was always a bit of distance between myself and her character, but this didn't stop me from be interested in her life and what would happen to her throughout the book. One of the other prominent characters is a man named Shin, who is somewhat of a mystery throughout the duration of the narrative, but who provides enough of an intrigue to make me continuously curious about him.

I am unsure on how I feel about the ending. The very last portion of the story had a slight shift and felt ever so slightly rushed in ways that I was not expecting. I do appreciate how Cook wrapped things and even gave us a glimpse into the future, but something did feel off about the last bit. That being said, I thought the overall events that occurred in the ending (no spoilers!) were fitting and created a beautiful ending to a haunting, beautiful story.

*I received a copy of Spinning Silk by T. Cook in exchange for an honest review. This has no effect on my rating of the novel.*


You might also like:
Anna and the Swallow Man by Gavriel Savit
The Demon Race by Alexandria Warwick
The Shadow Land by Elizabeth Kostova

Posted by Jordan @ForeverLostinLiterature at 7:41 AM