Hey, everyone! Today I'm thrilled to be able to share with you all the cover reveal for Jesse Teller's latest upcoming release, Legends of the Exiles! I am already hyped to read this book and I'm so happy to be included in this reveal. Along with the reveal is a guest post from Jesse Teller in which he discusses how and why he designed the cover the way he did and all of his reasoning behind each component. I highly recommend you give it a read because it provides some interesting insight that I found worthwhile to know.

So without further ado, I present to you the cover! 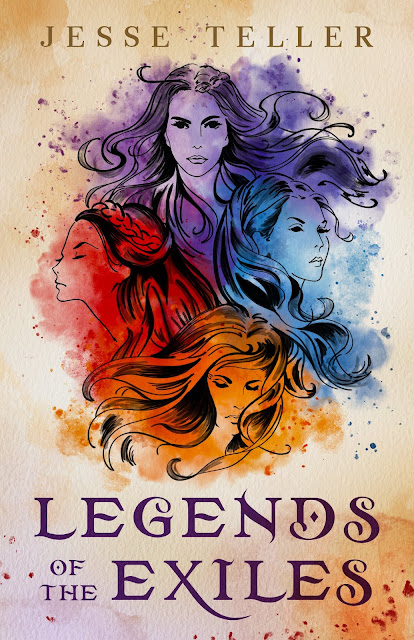 "The isolated barbarians of Neather have deep ancestry and strict traditions. Four resilient women defy tribal customs as they fight to overcome their own tragedies. Abuse. Addiction. Assault. Grief. What struggles can they endure to defend their hopes and their hearts?

Helena seeks a love as bold as she, yet finds the men of her village lacking.

Jocelyn fears her strange visions and sacrifices a life with the man she loves for the one her destiny demands.

Torn apart by abuse and grief, Ellen is a brilliant woman who must focus her intellect on finding reasons to persevere.

Rachel, a brash girl of noble heritage, dares all men to challenge her and longs for one who will.

In this set of four interwoven novellas, award-winning author Jesse Teller challenges assumptions and showcases the strength of feminine resolve."

Find it on Goodreads!

I needed to go to a place I had never been before. I needed to reinvent the way we did covers.
Writing Legends of the Exiles was a new experience for me. I write female characters a lot and have never been accused of writing them poorly, but this was a bold project, a book where I'm sticking my neck out, because this book was written by a man about four women. It is said men can't write believable female characters. With Legends of the Exiles, I've challenged that notion by creating a collection of novellas that explore the issues facing these four women in a male-dominated society.

When designing the covers for my previous books, my wife and I were pretty quick to decide what we wanted. My first covers were for three very dark books and we decided to deal in shadows. Each of the covers has on it the silhouette of a character. The idea was to show a gritty setting with the dark image of a character, and we were off. The covers were fairly easy to make. I say that because I didn't have to make them, but for the most part they were done without much trouble.

For The Manhunters series I wanted to work with symbols. I knew that early. How that would come about, I had no idea. There were a few items and a few images that showed the symbols of the characters and the story itself, and I wanted to explore that.

We got in touch with a brilliant cover designer named Jenny Zemanek who had done a few other covers we adored. She took our ideas and within a few days came up with a bunch of different directions we could go. We had the format and we were off. Colors and skulls and other images, striking font, and we had an award-winning cover for an award-winning series.

But Legends of the Exiles is different. It has heavy overtones of love stories mixed with dark subject matter and vibrant characters. Exiles is a book about women, and while I was writing it, I had ideas for what it might look like. I wanted women's faces. Wanted an illustration. But more than anything, I wanted a tone. I wanted an emotion that fit the book. Beauty and savagery, power and grace, I needed the cover to speak to the kind of women I had written about.

We of course went back to Jenny. I'm pretty sure she will be designing my covers for life. We got in touch with her with a very simple design idea: four illustrated female faces with a storm of hair. We sent her a crude mock up and hoped for the best. She got in touch with us, very excited. See, Jenny's mother is a retired illustrator. She had drawn for years, and the subject she drew was women. She drew fashion ads for certain products. She drew sewing pattern packages and the like. Jenny presented the idea of letting her mother draw my women, and again we were off. I was able to give a brief description of each woman's character. Let each character dictate what they would look like.

I had a mother-daughter team working on my female cover for my female book. I was happy with the concept, happy with the source of the work itself. I trusted Jenny, and the examples we saw of her mother's work got us really pumped.

I got a perfect rendering of each woman, a savage and fearless Rachel Beastscowl, a haughty and regal Jocelyn Fendis, a bold and daring Helena Dreadheart, and a shy and broken Ellen Black Knuckle. We didn't even need Jenny to explain who was who. Her mother had captured each woman so perfectly there was no mistaking them.

The cover my team and I created for Legends of the Exiles reveals the majesty and the power within the women themselves. It shows the inner strength and the love they were capable of, and reveals the love of a daughter and mother working together to create a piece of art I could not be more proud of.
When you look at this cover, I hope you see four powerful women. I hope you see the love of two artists. And I hope you will see my adoration for the female gender as a whole.
I hope it reveals to you the heart of Legends of the Exiles.

Jesse Teller fell in love with fantasy when he was five years old and played his first game of Dungeons & Dragons. The game gave him the ability to create stories and characters from a young age. He started consuming fantasy in every form and, by nine, was obsessed with the genre. As a young adult, he knew he wanted to make his life about fantasy. From exploring the relationship between man and woman, to studying the qualities of a leader or a tyrant, Jesse Teller uses his stories and settings to study real-world themes and issues. He lives with his supportive wife, Rebekah, and his two inspiring children, Rayph and Tobin.

Posted by Jordan @ForeverLostinLiterature at 6:54 AM