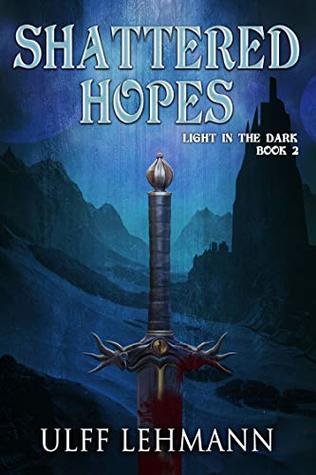 He has no idea how, nor is he any closer to unearthing why his beloved had to die.

Drowning in questions, Drangar receives aid from the unlikeliest of sources. The Chosen Kildanor, immortal warrior of a shunned god, has taken a liking to the mercenary. With his path to answers blocked by a besieging army, Drangar must do his part in defeating the enemy.

Shattered Hopes is a character-driven, intriguing and multi-layered epic fantasy novel, which you don’t want to miss. - Starlitbook Asylum."

I read Shattered Dreams, the first book in this series, a few months back and was enamored with the strong world-building, complex characters, and well-built storyline. This sequel, I am happy to say, definitely lived up to the strong start!

The sequel picks up almost immediately after the events of the first book, something that I always appreciate because we're able to jump right back into things with no missing time. For the sake of not going into spoilers, I don't plan to go in depth about plot details in this review, but will focus more on the characters, writing, pacing, etc. so that I don't give anything important away.

Even though I read the first book only maybe two months before reading the second, I still felt as though I needed a slight refresher on the some of the world, characters, events, etc. that were introduced and explained in the first book. There is, quite simply, a lot of detail in this world, which I do appreciate overall because it adds some extra authenticity and depth to the world, as well as captures Lehmann's dedication to his work, but it does require some effort.


I think one of my favorite things about this book is how Lehmann portrays all of the characters. They are all unique and complex and truly feel as though they have been brought to life. What I really like is that even the 'villain' type of characters are portrayed in a way that shows there is more to them than just the typical antagonist to our main cast. Sure, they may not be doing the best things all the time (who is, really?), but they aren't just evil for the sake of being evil and that is a villain I can get behind. Drangar and Ealisaid remain the two most prominent characters and also the two most interesting ones. Even though we got to know them quite a bit in the first book, I really felt that they were developed even more in this one and I got to know them even better. Their personalities are both endlessly enjoyable and kept me wanting to know more about them. In addition to Drangar and Ealisaid are other POVs as well, which provides even more to explore in the story.

I mentioned the religion that Lehman created in the first book, and I want to briefly touch on that again because it adds so much intrigue to these books. It's very immersive and plays a large role in the plot of this overarching story, something that it does extremely well. It also adds extra depth to the motivations and lives of the characters as we get to see how it affects both our main protagonists and those on a larger scale.

The pacing in Shattered Hopes is very much similar to that of Shattered Dreams, which shows some great consistency. It's still definitely a slower pace, but very steady and easily grabs the reader's attention. As I mentioned in my review for the first book, the reader really needs to be actively paying attention to the story in this book, as there is lot to both follow and to discern and understand for yourself.

Overall, I've given Shattered Hopes four stars! This was a solid continuation of a great start to a fantasy series. I am most impressed by Lehmann's continued world-building and ability to juggle so many different subjects and ideas in one cohesive book. Definitely give this series a shot if you enjoy some multi-perspective epic fantasy.

*I received a copy of Shattered Hopes courtesy of the author in exchange for an honest review. This has no effect on my rating of the novel.*

Posted by Jordan @ForeverLostinLiterature at 7:03 AM