Review: No Way by S.J. Morden

*No Way will be published Tuesday, February 26th!* 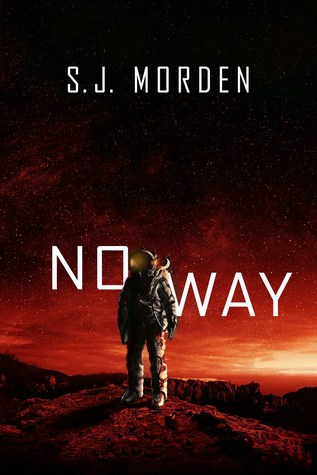 Note: This is the sequel to the first book, One Way, and although I will have no spoilers from this book, there will be things mentioned that may act as inadvertent spoilers for the first book. I never give specific spoilers, but I just want to give a head's up if you haven't read the first book.


"'In the sequel to the terrifying science fiction thriller, One Way, returning home from Mars may mean striking a deal with the very people who abandoned him.

They were sent to build a utopia, but all they found on Mars was death.

Frank Kitteridge has been abandoned. But XO, the greedy--and ultimately murderous--corporate architects of humanity's first Mars base made a costly mistake when they left him there: they left him alive. Using his skills and his wits, he's going to find a way back home even if it kills him.

Little does he know that Mars isn't completely empty. Just over the mountain, there's another XO base where things are going terribly, catastrophically wrong. And when the survivors of that mission find Frank, they're going to want to take even the little he has away from him.

If there's anything in Frank's favor, it's this: he's always been prepared to go to the extremes to get the job done. That's how he ended up on Mars in the first place. It just might be his ticket back."

No Way picks up almost immediately after the events of One Way and I would want it no other way. The intensity and the excitement are just as high as they were at the end of One Way, although this time Frank has some new high stakes to deal with that are vastly different than what he death with before--though they are just as deadly.

Frank is now alone on Mars--or so he initially thinks--and must take on all of the responsibilities around the base in order to keep himself alive for NASA's arrival in order for him to potentially go back to Earth one day. This, of course, includes cleaning up all of the mess leftover from the violent events that occurred at the end of the first book in order to keep XO happy and to ensure Frank is able to safely leave Mars. Predictably, nothing can possibly go smoothly on this dry, lonely planet, and Frank is suddenly dealing with even more stress than he already was.

Frank remains the same 'too-old-for-this-shit' sort of man that he was in One Way, and I appreciate how consistent Morden has kept his personality. Frank has definitely had major character development throughout both books, but the core things that make him who he is, such as his somewhat standoff-ish nature and his lack of a charismatic presence, continue to shine and make him an oddly and uniquely compelling character. I also enjoyed seeing Frank's interactions with the NASA crew that arrives, as it really put him in an uncomfortable position, what with XO still essentially controlling what he can say and Frank's own moral dilemmas with the information he holds onto. I liked that Morden took into account that Frank, who had spent months alone on Mars, would have some issues being suddenly inundated with an entire crew of new people, along with his trauma from the events of the previous book. I liked that Morden focused on the mental components of the entire ordeal in addition to the rest of the plot.

I mentioned in my review for the first book that the author trained as a planetary geologist, and his passion and dedication to the more technical aspects related to this story continue to shine in this book. I'm no rocket scientist myself and I can't say I have much knowledge of the specifics of how surviving on Mars would work so I can't professionally comment on it, but it appears his research is really well done and it adds so many layers of authenticity and realism that make this book all the more compelling. When something feels real, the stakes always feel higher and more personal and that's exactly what happened here. I think one of the things hat makes these books so captivating and chilling is that it all feels eerily believable. I do believe that there are people who would create companies that have such little compassion for human beings and would put them in dangerous situations.

No Way is the sort of book that you can't put down. Morden has true skill in knowing how to craft each chapter and event in such a way that makes the reader fully engaged with what's happening in the present, while also constantly yearning to find out what is going to happen next. He has a simple yet sophisticated prose that is filled with foreshadowing and excellent descriptions.

Overall, I've given No Way 4.75 stars (rounded up to five on Goodreads, etc.)! This is such an exciting series and I haven't been able to tear myself from the pages. I don't know if there is a third book in the works, but I desperately hope that there is because I will absolutely read it!

*I received a review copy of No Way courtesy of Orbit books in exchange for an honest review. This has no effect on my rating of the novel.*

You might also like:
One Way by S.J. Morden
Wayfarer: AV494 by Matthew Cox
Posted by Jordan @ForeverLostinLiterature at 7:01 AM