Can't-Wait Wednesday: Descendant of the Crane by Joan He & The Deepest Blue by Sarah Beth Durst

"Tyrants cut out hearts. Rulers sacrifice their own.

Princess Hesina of Yan has always been eager to shirk the responsibilities of the crown, but when her beloved father is murdered, she’s thrust into power, suddenly the queen of an unstable kingdom. Determined to find her father’s killer, Hesina does something desperate: she engages the aid of a soothsayer—a treasonous act, punishable by death... because in Yan, magic was outlawed centuries ago.

Using the information illicitly provided by the sooth, and uncertain if she can trust even her family, Hesina turns to Akira—a brilliant and alluring investigator who’s also a convicted criminal with secrets of his own. With the future of her kingdom at stake, can Hesina find justice for her father? Or will the cost be too high?

In this shimmering Chinese-inspired fantasy, debut author Joan He introduces a determined and vulnerable young heroine struggling to do right in a world brimming with deception."
I really love most Asian-inspired fantasy books that I've read, so that inspiration sparked my intitial interest in this book. I think Princess Hesina sounds like she'll be a promising protagonist as well and I can't wait to dive in and see where the plot goes! 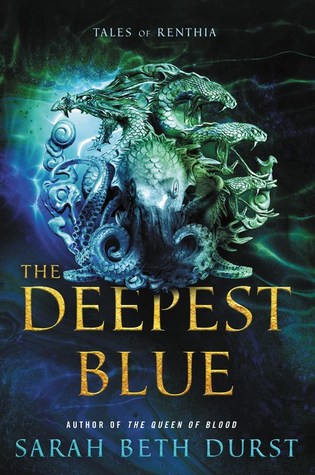 "The natural magic of the classic The Island of the Blue Dolphins meets the danger and courage of The Hunger Games in this dazzling, intricate stand-alone fantasy novel set in award-winning author Sarah Beth Durst’s beloved world of Renthia.

Life is precious and precarious on the islands of Belene. Besieged by a capricious ocean full of malicious spirits, the people of the islands seek joy where they can. Mayara, one of the island’s fearless oyster divers, has found happiness in love. But on the day of her wedding to the artist Kelo, a spirit-driven storm hits the island with deadly force.

To save her loved ones, Mayara reveals a dangerous secret: she has the power to control the spirits. When the storm ends, she is taken into custody by the queen’s soldiers and imprisoned with other women like her.

They vary in age and social status, but to many they are heroes who will aide the country or witches that will sacrifice themselves trying. No matter who they are, the women are sent to a terrifying place—an island filled with bloodthirsty nature spirits, and left without food, water, shelter, or any tools except their own instincts and magic. Whoever survives the Island of Testing will be declared heirs to the queen. But no matter if she wins or loses, Mayara knows that the life she dreamed of is gone."
Durst is the author of the popular Queens of Renthia series, and I believe this book is considered a standalone novel that's merely set in the same world as the previous trilogy, which makes me excited to check it out! I feel like it's been a while since I've read an island setting, so I'm looking forward to that aspect.

Email ThisBlogThis!Share to TwitterShare to FacebookShare to Pinterest
Labels: can't-wait wednesday, descendant of the crane, joan he, sarah beth durts, the deepest blue