A Conspiracy of Truths by Alexandra Rowland 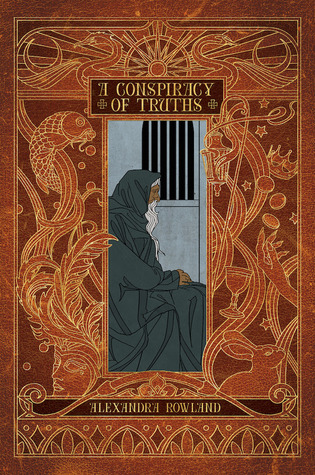 "The whole mess began in a courtroom in Vsila, the capital of Nuryevet, where I was being put on trial for something stupid.

“What’s all this about?” I said, not for the first time.

“Charges of witchcraft,” they said; at least, that was what it boiled down to.

“Utterly ridiculous,” I said. “We got some witnesses,” they said. “Your witnesses can go fuck themselves,” says I, although not in so many words.

I couldn’t even hear the witnesses from where I was sitting. The guards had stuffed me in an iron cage at one end of this giant fucking hall in the House of Justice, and of course it makes sense to someone to put the witnesses at the other damn end, as far away as possible from the man accused, like I was an afterthought of some kind."

Goodreads
This is one that I've had my eye on since before it came out, then i received it as a gift at Christmas, and I'm just now getting to it! It seems like it's going to be a really clever and entertaining read, so I'm excited to get more into it. I'm a little obsessed with the cover, also.

"Prologue: EVNIS
The Year 1122 of the Age of Exiles, Wolf Moon

Forest litter crunched under Evnis’ feet, his breath misting as he whispered a curse. He swallowed, his mouth dry.

He was scared, he had to admit, but who would not be? What he was doing this night would make him traitor to his king. And worse.

He paused and looked back. Beyond the forest’s edge he could still see the stone circle, behind it the walls of Badun, his home, its outline silvered in the moonlight. It would be so easy to turn back, to go home and choose another path for his life. He felt a moment of vertigo, as if standing on the edge of a great chasm, and the world seemed to slow, waiting on the outcome of his decision. I have come this far, I will see it through. He looked up at the forest, a wall of impenetrable shadow; he pulled his cloak tighter and walked into the darkness.

Corban watched the spider spinning its web in the grass between his feet, legs working tirelessly as it wove its thread between a small rock and a clump of grass. Dewdrops suddenly sparkled. Corban looked up and blinked as sunlight spilt across the meadow.

The morning had been a colourless grey when his attention first wandered. His mother was deep in conversation with a friend, and so he'd judged it safe for a while to crouch down and study the spider at his feet. He considered it far more interesting than the couple preparing to say their vows in front of him, even if one of them was blood kin to Queen Alona, wife of King Brenin. I'll stand when I hear old Heb start the handbinding, or when Mam sees me, he thought."

Goodreads
Since there was a prologue, I felt obligated to share a snippet from both the prologue and the first chapter since prologues can vary so much in style. This is another fantasy series that I've been meaning to read for quite a while! I started Gwynne's latest series last year with A Time of Dread, which I enjoyed a lot and which actually takes place after the events of this series, so... I really think I should get to this one.
Buy the book: Amazon | Book Depository | IndieBound