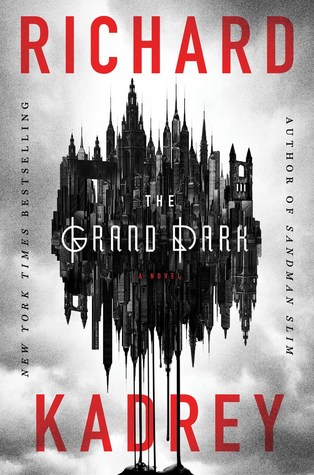 "The Grand Dark is a dark, stand-alone fantasy that immerses us in a world where the extremes of bleakness and beauty exist together in dangerous harmony in a city on the edge of civility and chaos.

The Great War is over. The city of Lower Proszawa celebrates the peace with a decadence and carefree spirit as intense as the war’s horrifying despair. But this newfound hedonism—drugs and sex and endless parties—distracts from strange realities of everyday life: Intelligent automata taking jobs. Genetically engineered creatures that serve as pets and beasts of war. A theater where gruesome murders happen twice a day. And a new plague that even the ceaseless euphoria can’t mask.

Unlike others who live strictly for fun, Largo is an addict with ambitions. A bike messenger who grew up in the slums, he knows the city’s streets and its secrets intimately. His life seems set. He has a beautiful girlfriend, drugs, a chance at a promotion—and maybe, an opportunity for complete transformation: a contact among the elite who will set him on the course to lift himself up out of the streets.

But dreams can be a dangerous thing in a city whose mood is turning dark and inward. Others have a vision of life very different from Largo’s, and they will use any methods to secure control. And in behind it all, beyond the frivolity and chaos, the threat of new war always looms."
Is that not the most dramatic and eye-catching cover? I'll be completely honest and admit that what first drew me to this book was the cover, but I was more excited when I discovered how good it sounded. It sounds like it's going to be a really dark and gritty fantasy, so I'm all here for that! 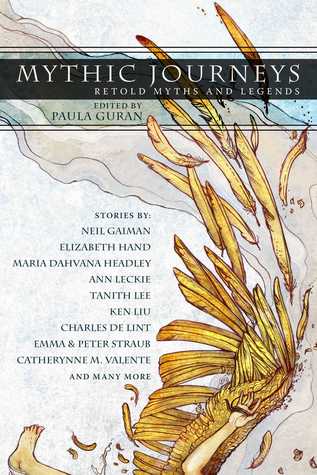 "Myths and legends are the oldest of stories, part of our collective consciousness, and the source from which all fiction flows. Full of magic, supernatural powers, monsters, heroes, epic journeys, strange worlds, and vast imagination, they are fantasies so compelling we want to believe them true.

The authors of fantastic literature create new mythologies, heroes, and monsters. Retelling, reinventing, mixing the old with new insight and meaning. Their stories, like the ancient tales, entertain and often offer readers new ways to interpret and understand the world.

Drawn from diverse cultures, modern legends and mythic tales are told in a variety of ways—amiable or acerbic, rollicking or reflective, charming or chilling—as they take us on new journeys along paths both fresh and familiar.

Featuring stories from: Emma Straub, Peter Straub, Neil Gaiman, Catherynne M. Valente, Brooke Bolander, Tanith Lee, Aliette de Bodard, Ann Leckie, Yoon Ha Lee, Ken Liu, Genevieve Valentine, and more."
I am always ready for myth-related stories, especially when they're told by some of my favorite authors, such as Neil Gaiman and Catherynne M. Valente! I haven't seen much about this collection anywhere, but it sounds incredibly promising and I look forward to checking it out one day.