Review: A Time of Blood by John Gwynne 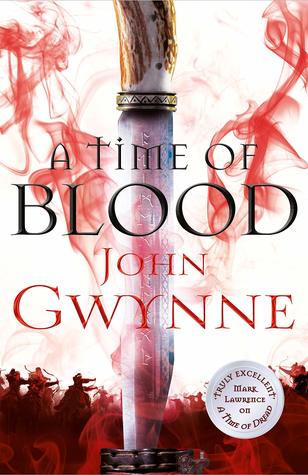 About A Time of Blood:


"Defy the darkness. Defend the light.

As demonic forces multiply, they send a mighty war-host to overthrow the angel’s stronghold. This could decimate the fractured Ben-Elim. And their allies in the Order may be too overwhelmed to send aid – with Fritha and her monstrous beasts closing in. Like heroes of old, Drem and the Bright Star’s warriors must battle to save their land. But can the light triumph when the dark is rising?"

A Time of Blood is truly a phenomenal followup to A Time of Dread that only makes this world and storyline more exciting. In much the same way as when I read A Time of Dread, I can't quite put my finger on what it is that makes the Of Blood and Bone books so compelling and stand out so much. Of course I'm aware that the characters are wonderfully crafted and multidimensional, the world-building is effortless yet fully developed, and the plot itself is compelling, but there's still just something special about the way Gwynne writes these things that makes it impossible to put this book down. I read it in just two and a half days because I couldn't manage to stop turning the pages, and for a book of this size, that's pretty good for me.

The story picks up pretty much right where A Time of Dread ended so there's no real struggle with getting reacquainted or determining where things are located. My memory was a little fuzzy on the minor details after the intense end of the first book (although there were certain things I absolutely could not forget), but within the first few pages everything came back to me and I was right back in the world, fully invested in the characters and the conflicts. The world-building also came right back, and I liked that a lot of the settings continued to be explored in this book as well.

When I was getting ready to discuss the characters, it occurred to me that by mentioning or not mentioning characters I could easily give away some spoilers for the first book, so for that reason I think I am going to refrain from being too detailed when it comes to the characters. I will, however, remark upon how much I love Drem and how much I have truly enjoyed watching him grow over these two books. I actually think one of my favorite parts of A Time of Blood is the character development. I love the honor and respect that so many of these characters hold and value, as they really give this story a grounding and very classic feel that I don't see a lot in fantasy lately. The fact that many of these characters and groups of people are not strictly "good" or "bad" is also something that I really appreciated, as I particularly like when characters have a bit more of some grey elements to them. It's not that most of the characters are morally grey, but there's a lot to each person and/or group, such as the Ben-Elim, that really adds some depth and adds a layer of authenticity. Additionally, fantasy that focuses on battles or has a lot of battle/fighting elements can sometimes lack when it comes to the development of characters and their personal stakes, feelings, thoughts, etc. Not so with Gwynne--he dives deep into the minds of his characters and leaves every thought available to the reader. It's nice to read about the struggles of the characters and understand how human and real they are.

The pacing is also remarkably steady, with an even balance of fast-paced fighting scenarios and steadier scenes focusing on characters and plot developments. I believe I mentioned in my review for A Time of Dread how well-written Gwynne's action scenes are, and that hasn't changed a bit in this book. I tire easily of action and battle scenes in books--often times they are drawn out, uninteresting, and I end up either skimming them or wishing I were skimming them. That, however, is not the case with this book! I hardly even realize I'm so engrossed in an action scene until I pull myself out of the story and realize how lost I was in it. The creepy creatures and monsters from the first book are bigger and even worse this time around and added an intense level of darkness and inventiveness to this book.

Overall, I've given A Time of Blood 4.5 stars! If you love a good fantasy with epic stakes and compelling characters, the Of Blood and Bone series is for you.

*I received a copy of A Time of Blood in exchange for an honest review. This has no effect on my rating of the novel.*

Email ThisBlogThis!Share to TwitterShare to FacebookShare to Pinterest
Labels: a time of blood, john gwynne, of blood and bone, review