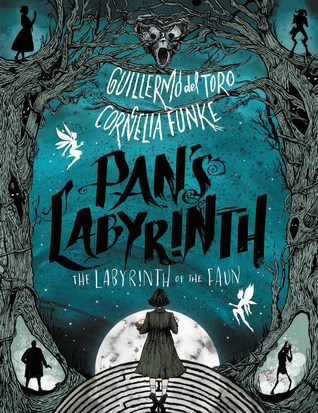 This book is not for the faint of heart or weak in spirit. It’s not for skeptics who don’t believe in fairy tales and the powerful forces of good. It’s only for brave and intrepid souls like you, who will stare down evil in all its forms.

Perfect for fans of the movie and readers who are new to del Toro’s visionary work, this atmospheric and absorbing novel is a portal to another universe where there is no wall between the real and the imagined. A daring, unforgettable collaboration between two brilliant storytellers."
I am beyond excited for this book adaptation of Pan's Labyrinth! I am especially excited because of the fact that the incredible Cornelia Funke is working on this as well and I just love her books. I'm also really looking forward to the illustrations that will be in this, I have a feeling they will be stunning.

"It's been eighteen months since the Raxter School for Girls was put under quarantine. Since the Tox hit and pulled Hetty's life out from under her.

It started slow. First the teachers died one by one. Then it began to infect the students, turning their bodies strange and foreign. Now, cut off from the rest of the world and left to fend for themselves on their island home, the girls don't dare wander outside the school's fence, where the Tox has made the woods wild and dangerous. They wait for the cure they were promised as the Tox seeps into everything.

But when Byatt goes missing, Hetty will do anything to find her, even if it means breaking quarantine and braving the horrors that lie beyond the fence. And when she does, Hetty learns that there's more to their story, to their life at Raxter, than she could have ever thought true."
This sounds like everything I love and I've heard nothing but raves from people who have already this. I actually just won an ARC of this in a giveaway so I'm anxiously awaiting it's arrival, but I can only imagine how gorgeous the book is going to be when it comes out. This sounds incredible!