Review: The Yoga of Strength by Andrew Marc Rowe 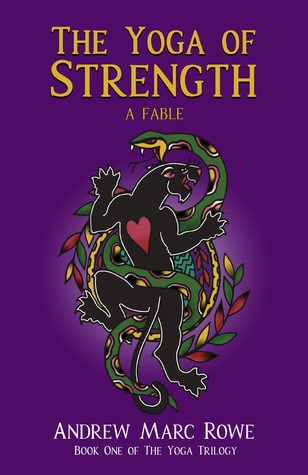 
"A HERO'S JOURNEY INTO THE HEART OF REALITY

The Yoga of Strength is the story of Andrew Cardiff, a long-time squire on the cusp of elevation to Knighthood within the Yellow Order of the Kingdom of Thrairn. There is only one issue: he is an abject coward and slave to his baser instincts. Thrust into a world of magic and treachery, Andrew tumbles along a path that threatens devastation at every turn. This unlikely hero must plumb the depths of his soul in search of the courage and strength that have always eluded him. Around him, the world is crumbling. Will Andrew discover his answers at the center of the mystery before it is too late? "

The Yoga of Strength was a highly enjoyable and unexpected read. It's also another great book that I was asked to read courtesy of the TBRindr service and once again I am reminded of why I enjoy being a part of that community so much! I love fantasy with unique characters and an engaging storyline, and that is exactly what I got with this book.

One of the first things I noticed about this book was the prose, which had a bit of a 'purple prose' feel to it in terms of description and style, which I thought added a vibrant, engaging layer of personality to the story and I enjoyed it immensely. However, if this isn't something you enjoy, then I can see where it could be divisive among different readers depending on their preferred style.

The main protagonist, Andrew, is not someone who 'has it all' in any sense of the word. From the very beginning of the story, he is introduced to us as someone who is out of shape, a bit on the lazy side, and generally not someone who would be recognized for his hard work and uncomplaining nature. Andrew is someone who sort of knows that he disappoints his family and others around him and has essentially accepted that as who he is and thus acts in the same manner.  The best thing about Andrew and this book, however, is his character growth throughout the story, an area in which I think Rowe did a really great job developing. There were a few places where Andrew's personality felt a bit out of place and inconsistent, but these areas were minimal and I found the overall picture of his growth gradual and realistic. It isn't development that happens overnight, but is rather very believable overall and I really liked that.

The world-building and magic system were other areas that I think Rowe did a good job of creating, as they were both things that I actively enjoyed and was interested in learning more about. One of the factors that I use to judge the world-building/magic system of a book is whether or not I had the desire to learn more about--and I definitely did in this book. Although it wasn't overly expansive, there is enough shared about the general culture and history to have just enough to fully enjoy the story and had some great diverse elements that stood out and made this book a step above average. The only thing about the world that I didn't fully understand was the mix of fantasy terms and a medieval-esque world with some more modern terminology and references. If Rowe's intent was to create this mash-up of sorts, then he did it really well and I have no complaints, but I just wasn't exactly sure what overall setting and world Rowe was going for in regards to this. Other than that, I really don't have any complaints about the world!

As the story progresses, we begin to learn that the 'strength' mentioned in the title is not just about physical strength. In order to be successful, Andrew has to discover more than just his own physical strength, a lesson that I always like to read and that Rowe conveyed smoothly. In addition to strength, Andrew is able to learn a variety of other new things about himself and others that adds even more emotional depth and intrigue to this book.

Overall, I've given The Yoga of Strength 3.75 stars. If you're looking for another great fantasy, be sure to give this a shot!

*I received a copy of The Yoga of Strength in exchange for an honest review. This has no effect on my rating of the novel.*

Posted by Jordan @ForeverLostinLiterature at 6:47 AM