Review: A Song for a New Day by Sarah Pinsker 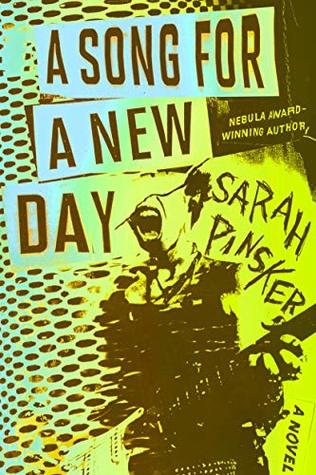 About A Song for a New Day:


"In the Before, when the government didn't prohibit large public gatherings, Luce Cannon was on top of the world. One of her songs had just taken off and she was on her way to becoming a star. Now, in the After, terror attacks and deadly viruses have led the government to ban concerts, and Luce's connection to the world--her music, her purpose--is closed off forever. She does what she has to do: she performs in illegal concerts to a small but passionate community, always evading the law.

Rosemary Laws barely remembers the Before times. She spends her days in Hoodspace, helping customers order all of their goods online for drone delivery--no physical contact with humans needed. By lucky chance, she finds a new job and a new calling: discover amazing musicians and bring their concerts to everyone via virtual reality. The only catch is that she'll have to do something she's never done before and go out in public. Find the illegal concerts and bring musicians into the limelight they deserve. But when she sees how the world could actually be, that won't be enough."

A Song for a New Day takes a fascinating--and at times haunting--look at a future in which the threat of mass danger, from bombs to shootings, has become so large that large public gatherings have been banned and are now illegal. There are 'congregation' laws that limit how many people can be in one place at a time and that regulate the size a building must be in concordance with how many people live there. Additionally, there was a disease that swept through the country and further encouraged people to remain seclusive and not venture out into areas where large groups of people gather that can spread germs.

A Song for a New Day switches POV between Luce, lead singer of a band, and Rosemary, a woman who has been living a fairly secluded life with her family while working virtually from her home. Luce's POV starts out in the past and slowly merges with Rosemary's present day, which presented some really interesting perspectives and background throughout the story. Luce is a bit like your typical musician/rocker, desiring nothing but to connect with others through her music and live her life touring around and sharing her music. The social changes that take place in this future-esque world hit musicians like Luce extremely hard and she has to sort of adapt to a new way of life and a new sneakier method of showcasing live music. Luce is an impressively tough and adaptive woman that adds such an interesting perspective and has one of the biggest life changes throughout the book that we get to see.

Rosemary was a really interesting character for a few reasons, most of which pertained to her sheer ignorance to most things that we take for granted everyday. Her complete lack of knowledge regarding how concerts even work, her naivete and innocence on what it's even like to visit somewhere far away from her home--especially a larger city such as Baltimore--and so many more relatively normal (for us) experiences. Experiencing all of these things through the lens of someone who grew up in a world in which taking the public bus, visiting a busy city, or even eating at a restaurant sans individual enclosed booths was genuinely fascinating. Pinsker really did a marvelous job of conveying her naivete and new experiences; she really noted every new thing Rosemary experienced and made it feel so plausible and authentic. It almost made me sad at times to see the things that were so foreign to Rosemary and how much we love doing those things today--imagine a world like that with no public gatherings, ever. Rosemary grows a lot over the course of this book and I liked seeing her journey, though I do think some aspects could have been developed a bit more.

As mentioned, there was a lesser but still prominent disease angle at play at this book and I was interested in its effect on the current state of things as well. However... I was slightly confused as to why it was also included. I felt as though the book could have easily just focused on the congregation-related issues and been just as strong; the disease only seemed to exacerbate people's fear and lead to more struggles for our protagonist. Perhaps its purpose was simply to showcase the fear that can so easily spread among the pubic, but it seemed like a somewhat unnecessary addition to the plot.

Despite my confusion over the disease storyline, I still appreciated everything else this book explored. I found this to be a really nuanced and interesting look at what this future filled with fear and danger would be like when taken to the extreme. I haven't read any other work from Pinsker before this one, but I will be sure to check out more from her!

Overall, I've given A Song for a New Day four stars! I was fascinated by the concept and overall thoroughly enjoyed this one, though there were still just a few issues I had with it.

*I received an ARC of A Song for a New Day courtesy of the publisher and NetGalley exchange for an honest review. This has no effect on my rating or enjoyment of the novel.*

Email ThisBlogThis!Share to TwitterShare to FacebookShare to Pinterest
Labels: a song for a new day, review, sarah pinsker