First Chapter Tuesday: The Great Pretender by Susannah Cahalan & Into the Planet: My Life as a Cave Diver by Jill Heinerth

I'm not really actively participating in nonfiction November, but I am reading/planning to read these two nonfiction books that I am enormously excited about, so I thought I'd share them in a First Chapter post!


The Great Pretender: The Undercover Mission That Changed Our Understanding of Madness by Susannah Cahalan

"The story that follows is true. It is also not true.

This is patient #5213’s first hospitalization. His name is David Lurie. He is a thirty-nine-year-old advertising copywriter, married with two children, and he hears voices.

The psychiatrist opens the intake interview with some orienting questions: What is your name? Where are you? What is the date? Who is the president?

He answers all four questions correctly: David Lurie, Haverford State Hospital, February 6, 1969, Richard Nixon.
Then the psychiatrist asks about the voices.
The patient tells him that they say, “It’s empty. Nothing inside. It’s hollow. It makes an empty noise.”
“Do you recognize the voices?” the psychiatrist asks.
“No.”
“Are they male or female voices?”
“They are always male.”
“And do you hear them now?”
“No.”
“Do you think they are real?”
“No, I’m sure they’re not. But I can’t stop them.”
The discussion moves on to life beyond the voices. The doctor and patient speak about Lurie’s latent feelings of paranoia, of dissatisfaction, of feeling somehow less than his peers. They discuss his childhood as a son of two devout Orthodox Jews and his once intense relationship with his mother that had cooled over time; they speak about his marital issues and his struggle to temper rages that are sometimes directed at his children. The interview continues on in this manner for thirty minutes, at which time the psychiatrist has gathered nearly two pages of notes.

The psychiatrist admits him with the diagnosis of schizophrenia, schizoaffective type.

Goodreads
I've already started this one and I am so enraptured by it already. It covers a fascinating psychological experiment as well as has some great commentary and analysis of the history of how we treat mental illness and the evolution of psychiatric hospitals. Highly recommended so far!


Into the Planet: My Life as a Cave Diver by Jill Heinerth 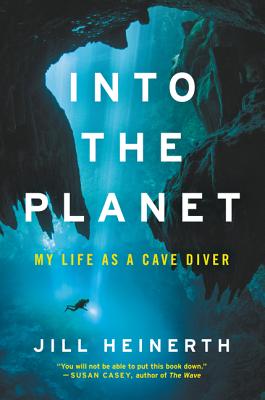 "If I die, it will be in the most glorious place that nobody has ever seen.

I can no longer feel the fingers in my left hand. The glacial Antarctic water has seeped through a tiny puncture in my formerly waterproof glove. If this water were one-tenth of a degree colder, the ocean would become solid. Fighting the knife-edged freeze is depleting my strength, my blood vessels throbbing in a futile attempt to deliver warmth to my extremities.

The archway of ice above our heads is furrowed like the surface of a gold ball, carved by the hand of the sea. Iridescent blue, Wedgwood, azure, cerulean, cobalt, and pastel robin's egg meld with chalk and silvery alabaster. The ice is vibrant, bright, and at the same time ghostly, shadowy. The beauty inside an iceberg. And we may not live to tell the story."

Goodreads
I've been wanting to read this one for months and it's finally out and I finally got it from my hold at the library! I can't wait to dive into (bad pun intended, I'm sorry) this one and learn more about cave diving, something that has fascinated me for so long. I could never do it, so I prefer to live vicariously through others.