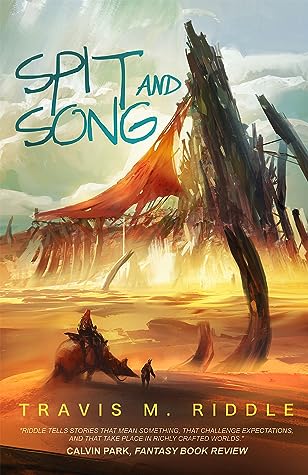 About Spit and Song:


"Kali is a merchant who yearns to leave the harsh deserts of Herrilock and travel across the sea, trading goods and soaking in the sights and cultures. With a new potion on the market undercutting her profits, though, her seabound dreams are put on hold indefinitely.

Failed musician Puk hits rock bottom after yet another catastrophic performance. Wandering the city streets in search of any sip of booze or whiff of fire-spit he can get his hands on, he resigns to the fact that he’s stuck in the desert with no way back home to Atlua.

Until one day, their paths cross with an illicit job opportunity. With its hefty payday, Kali and Puk could afford to finally escape the desert heat and set sail across the gulf.

The black market job would see them travel endless dunes on a road made from a massive dead beast’s ribs and out to a mythical city in the sea, scuffling with monsters and thugs in search of a long-lost book that might be the most dangerous object in the world.

How hard could it really be?"

This is the fourth book I've read by Travis M. Riddle at this point and it's also the fourth book of Riddle's that I've sort of loved. I'm not sure exactly how he does it, but Riddle certainly knows how to create a fantastic story.

Spit and Song takes place in the same world as Balam, Spring, but it acts as a standalone and there's no need to read Balam, Spring prior to reading this one (though you really should because it's fantastic). If you have read Balam and enjoyed it, but wish there was more adventure, then Spit and Song is going to be exactly what you're looking for. Spit and Song takes the fantasy world charm and intricate world-building from Balam, Spring and adds a heavy dose of adventure, mischief, and intrigue to make this a warm and welcoming yet also exciting and unpredictable book. I particularly enjoyed getting to explore more of this world and experience a variety of settings compared to the single setting of Balam, as well being able to go deeper into some ideas that were only briefly mentioned about this world prior.

Spit and Song is split POV between Kali and Puk which worked wonderfully and brought the perfect amount of variety and differing perspectives to the story. One of our main characters, Puk, is a qarm and a struggling musician trying to get by in life while also maintaining an addiction to the popular drug called spit. Puk is enormously endearing and despite his occasionally questionable choices that make you want to scold him, he has a charismatic attitude that also makes you want to see what he can do with his life because of how much potential seems to be simmering beneath the surface of his lackadaisical exterior.

The other main character that we follow is a faif named Kali who is currently working as a merchant and who has great future aspirations to become a traveling merchant that gets to travel to an abundance of far-off places and explore countless new things.Kali is extremely relatable in her desire to become something more than she is right now. She doesn't just want to be an average merchant, she wants to be something bigger and better than that and I found that desire was something that both drove her own actions in the story as well as helped to further the plot due to her willingness to take on a new adventure with Puk.

Kali and Puk were both characters that I loved getting to know and also getting behind in their journey--I couldn't help but constantly root for them and look forward to whatever adventurous event would happen next. They both have pretty different personalities and outlooks on life, but something about them together as a team fits perfectly and they couldn't be better suited to work together (well, maybe a little, but they really are a perfect team). There's a good deal of wit and humor that develops within their dialogue and interactions, which only added more depth and enjoyment to their friendship.

Spit and Song has a very steady pace that tends to lean more towards the slow side than a fast-paced one, but I personally thought it worked really well with the story and that the pacing was perfect. I also felt that Riddle incorporate a lot of great themes, morals, and ideas into his story in some really natural and flowing ways. This might be a story about two individuals traveling to track down something for a black market job, but it's also a story about following dreams, overcoming obstacles, hitting rock bottom, taking a leap of faith, and challenging expectations. And it's a hell of a lot of fun!

Overall, I've given Spit and Song five stars! If you loved Balam, Spring, you'll love this one too! If you haven't read Balam, Spring, then go read both of these books and you can thank me later.


*I received a copy of Spit and Song courtesy of the author in exchange for an honest review. This has no effect on my rating.*