Today I am excited to share a different sort of Friday battle than what I normally do! Rather than participating in this week's Friday Face-Off, we're switching things around and doing something new that features a guest post from author Steve Goble, where he discusses a Friday battle that pits his own pirate character against other fictional pirates! If you like pirates half as much as I do (and come on, who doesn't love a good pirate?), then I'm sure you'll have as much fun reading this as I did.
And if you love pirates that much, be sure to check out Goble's latest release, A Bottle of Rum, which is what has prompted this guest post. Huge thanks to Steve Goble for providing a fantastic guest post for my blog for everyone to read, I hope you all enjoy it! There's some information about the book below the guest post to check out if you're interested. :)

Face Off Friday: Pirates!
by Steve Goble
Once you’ve written a couple of pirate novels, it’s natural to wonder how your protagonist might stack up against other fictional pirates.
I’m Steve Goble, and I write murder mysteries featuring a good man who got caught up in a bad pirate crowd. His name is Spider John Rush, and he is trying to escape the pirate life to get back to a woman he loves and a son he has not seen since the lad’s infancy. Along the way, he ends up solving mysteries and outwitting pirates and other criminals.
So how would my character fare against other fictional pirates?
The first character who springs to mind when I think of pirates is Long John Silver. Robert Louis Stevenson set the gold standard with Long John when he wrote “Treasure Island,” surely the finest pirate tale ever written. Long John is crafty, clever, colorful and, at times, difficult to fathom. Can Jim Hawkins really trust the man? Or is he just using Jim to fulfill his own goals?
If Spider John ever found himself tangling with Silver, how would it go? In a straight fight, my money is on Spider unless Long John takes him by surprise. Long John hobbles about on one leg, and he is a bit older than Spider. Of course, Silver is meaner and more likely to cheat if he must, so the outcome is far from certain.
As for colorful language, Silver is perhaps more eloquent, but I write in the present day so my guy gets to use words that Stevenson could not. As Mystery Scene put it: “There are several instances where Spider’s cursing resembles high art, requiring a second and third reading to admire clever vulgarity.”
Long John is a devilishly crafty fellow, though, and if Spider ever found himself trying to thwart the man’s plots, I suspect the plot would fail but Long John would get away unscathed.
Silver has one big advantage that might tip the scales in his favor, though, in any sort of conflict. Long John has a parrot, and Spider John is deathly afraid of birds.
Hmmm. Maybe we should move on to another fictional swashbuckler.
How about Captain Jack Sparrow?
In a fight, put your pieces of eight on Jack. He’s a better swordsman, and he is far, far luckier in battle than any pirate has a right to be. Spider is a tough fellow and very handy with blade or pistol, but he frequently endures cuts and bruises and scrapes, and even lost a thumb along the way. Jack Sparrow generally comes out unharmed, even when encountering krakens.
That’s another place where Jack tops Spider. My protagonist is far more superstitious than the typical mystery hero — his grandmother was accused of witchcraft, and he occasionally has to convince himself not to believe in ghosts — but he undoubtedly would stain his breeches if he ran across anything like the kraken or the cursed pirates or any of the other supernatural denizens that Jack Sparrow faces routinely.
I do think Spider holds his liquor better, though.
And then there is Captain Peter Blood, the creation of Rafael Sabatini and portrayed on the big screen by Errol Flynn. Like Spider John, Blood never really set out to be a pirate. In Spider’s case, he was drafted into that life when the bloody brigands who attacked his ship let him live only because they badly needed a carpenter. (Just imagine the repair needs for a pirate fleet, and you’ll understand.) As for Blood, he was sent to the Caribbean as a slave because he used his medical skills to help someone who had rebelled against King James II.   Later, Peter found a way to escape via piracy, and became quite the thorn in everyone’s side.
So both men are basically good at heart, but were compelled to take up thievery on the high seas as a means of survival.
Who would win in a fair fight? In my mind, it would take some sort of misunderstanding for Spider and Blood to cross blades in the first place, so I imagine that each man would land a thrust or a swipe or two, each would take a nasty but non-fatal wound, but eventually they would realize they just might be on the same side after all. Hell, after that, Spider might even end up joining Blood’s crew.
Now that would be a swashbuckling tale, indeed.
One other fictional pirate Spider probably would team up with is Captain Morgan — the guy on the rum labels. Spider has quite a thing for rum.

Steve Goble is the author of the Spider John Mysteries: “The Bloody Black Flag,” “The Devil’s Wind,” and, in November 2019, “A Bottle of Rum.” All are published by Seventh Street Books. 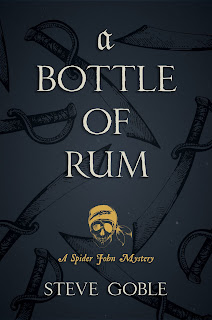 "A Bottle Of Rum entertains from the first knife thrust to the final explosion. Goble’s mystery-solving pirate, Spider John, comes ashore in his latest adventure, but the swashbuckler’s trademark ingenuity, loyalty and mind-boggling profanities are on full and dazzling display as always." — Andrew Welsh-Huggins, editor, Columbus Noir and author, the Andy Hayes private eye series.

August, 1723 -- Spider John Rush believes he has escaped piracy forever. Enjoying rum and chess in a dark Lymington tavern, he dreams of finding passage to Nantucket to reunite with his beloved Em and to finally get to know the son he remembers only as a babe in arms, though the lad must be dreaming of going to sea himself by now. But when a lazy taverner is stabbed to death, one glance at the victim tells Spider the pirate life has followed him ashore and he cannot possibly ignore this bloody crime. The wise maneuver would be to run before authorities arrive, but Spider is denied that choice because he’s already deeply, connected to the crime—he fashioned the murder weapon with his own hands.

The knife was a gift to a young man, one who ran off with the notorious Anne Bonny before Spider could drag him into a respectable life.

Soon, Spider John and his ancient shipmate Odin are dodging accusations and battling smugglers on a trail that leads to a madhouse where patients are dying one by one. Spider finds himself tangling with a horribly maimed former shipmate, vengeful pirates, a gun-wielding brunette, a death-obsessed young woman, a sneaky farmhand and a philosopher engaged in frightening experiments. But death seems to be winning at Pryor Pond, and the next life lost may be the one Spider desperately wants to save.

Spider must brave sharp steel, musket balls, gunpowder bombs, dangerous women and gruesome surgery if he is to find his foolish young friend alive and try once again to put piracy in their past.

Steve Goble writes historical mysteries. He is the author the Spider John Mysteries, which combines his love of swords, pirates and murder to follow a pirate detective on water and land. A BOTTLE OF RUM (Nov. 12, 2019; Seventh Street Books) is the third installment in the series.

A former journalist, Goble now works in communications for a cybersecurity firm as a digital forensics analyst. Goble helps examiners analyze evidence from computers and smartphones to help resolve a variety of civil and criminal cases.

And be sure to check out the other books in the Spider John Mysteries already out! 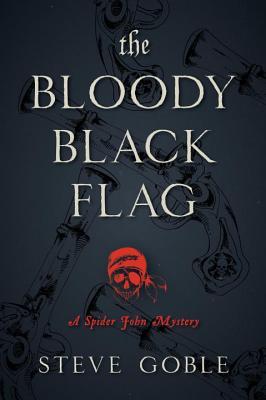 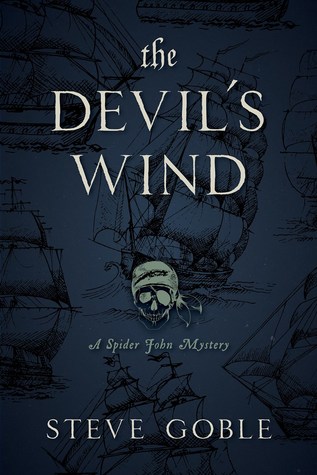