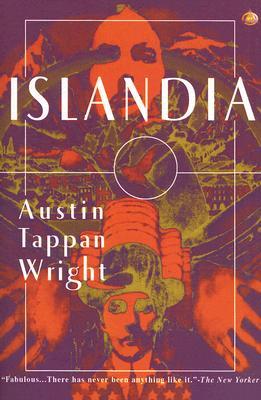 "Austin Tappan Wright left the world a wholly unsuspected legacy. After he died in a tragic accident, among this distinguished legal scholar's papers were found thousands of pages devoted to a staggering feat of literary creation—a detailed history of an imagined country complete with geography, genealogy, literature, language and culture. As detailed as J.R.R. Tolkien's middle-earth novels, Islandia has similarly become a classic touchstone for those concerned with the creation of imaginary world.

Islandia occupies the southern portion of the Karain Continent, which lies in the Southern Hemisphere. Its civilization is an ancient one, protected from outside intervention by a natural fortress of towering mountains. To this isolated country - this alien, compelling and totally fascinating world - comes John Lang, the American consul. As the reader lives with Lang in Islandia, as he comes to know this magnetic land, its unique people, its strange customs, he may find himself experiencing a feeling of envy, a wish that he, like Lang, be permitted, at the book's end, to return once more and spend the rest of his days in Islandia."

This is a book that, frankly, I'm not sure how to review. It's a little over a thousand pages and while a lot of information is presented, not a lot necessarily happens for a novel of this size. I'm going to do my best to make this review as condensed as possible and only touch on the biggest components, but it's still probably going to be on the longer side.

Islandia follows a young American man named John Lang who goes on a year-long business trip to Islandia, where he slowly falls in love with the country's culture, land, life, and people. Before reading Islandia, what I most often heard about it was that heard most about Islandia was its expansive world-building that rivaled that of Tolkien's in detail and magnitude. Don't let this comparison trick you, though--Islandia isn't a fantasy in any sense and certainly not in the same way that Tolkien's Middle Earth is, but rather a story that takes place in our own world, save for the addition of this land called Islandia that is located on the invented Karain continent supposedly near "unexplored" areas near Antarctica.

The characters throughout Islandia were all interesting to follow and all had unique personalities, though a large part of my interest in them derived from the fact that I found it so difficult to understand them at times, which I understand sounds a bit odd, but it's true. Lang is a very thoughtful man and I appreciated that, though he's also a rather conflicted person who struggles a lot with merging his upbringing of American values and cultures and his interest and desire to learn more about Islandia and to become more Islandian. He undergoes many changes and has to make a lot of both small and life-changing decisions in this book, so I can't fault him for his occasional indecisiveness and overall I'd say he handles most obstacles well. However, a major issue for me regarding the characters was the awkward dialogue that persisted the entire length of the story. We all know that dialogue in older books can already be different from that of more modern dialogue, but the writing in Islandia was exceptionally stilted to me and I couldn't always interpret what some characters meant when they said certain things, which frustrated me quite a bit. It was a struggle to read through long conversations where the dialogue was uncomfortable and confusing.

A big surprise to me in Islandia was the inclusion of and strong focus on romance between Lang and various women. The romance took up a lot of this book and I was not expecting that at all. There were some really interesting components to the romance because of how much it incorporated discussions of issues surrounding what it's like to navigate a relationship in a new culture or to attempt to bring two cultures together and communicate effectively, which was a component that I really liked. What I didn't like was Lang's near-incessant moaning and pining about his love woes. Maybe if I knew that would be a part of this book coming into I wouldn't have minded it as much, but since I didn't expect any romance I found this excessive and I really wanted Lang to just get on with his life.

As to the writing style, Wright loves his descriptions and will spend page after page describing the most (in my opinion) mundane landscapes or methods of working and farming. I don't mind descriptions of these topics in principle and I found it interesting to learn how the Islandians performed various work, but Wright's seemingly endless ramblings left me wanting it to be over quicker. This finished manuscript edition of Islandia is only a third (a third!) of what Wright originally wrote, as his daughter was the one to edit it down into the finished book we have today. In all truthfulness, I think it could have been edited down a bit more, but it still works as it is.

The other major issues that irked me were--as one might expect from a book written in the early twentieth century by a white man--the racism and sexism. I always understand that books from different times are going to have more issues, but it can still frustrate me to read it. The racist overtones were not necessarily overtly abundant and constant, but the most bothersome part was simple how out of nowhere a random sentence or phrase would be thrown out that just made me double take and realize that no matter how 'progressive' Wright tried to make this book and Islandia, it was still mired in the realities of the real world. An example of the issue with racism-related things in this book is the overall concept of the 'otherness' of Islandia. Most Americans in this book view Islandia as an 'uncivilized' place that's 'behind the times' in advancements and technology because of how they still do their farming and don't have as many professions or interest in the arts and humanities as America does. Islandia is consistently portrayed as a place that is so unlike any other place, but in reality I wouldn't say it all that different from all cultures around the world. Just because it does't match 'Western' standards doesn't mean it's any lesser than others and might actually be similar to other cultures around the world. And while John Lang tries to show the many amazing things about Islandia, he still perpetuates this outlook a lot in his discussions.

As far as sexism goes, I can agree with others who have said that there are some more progressive stances towards women in this book, but these are few and far between. Islandia is indeed more progressive than America in this time period, as women are treated somewhat more equally and can partake in traditionally 'manly' events, such as being in charge of taking a boat out (which is an example from a scene in which Lang had a hard time letting a women do it rather than himself), though there still seem to be some traditional gendered roles among the Islandians. However, there aren't things are necessarily 'off-limits' for any specific gender, which adds to a more progressive perspective than that of America. There are still endless issues relating to women's role in this book that are presented in very matter-of-fact ways with very little nuance to them. That being said, if you read any book from past a certain time in the past (or frankly, even the present), you can easily expect sexist elements to be an accepted stance.

Outside of those negatives (and I realize it sounds like a lot), I did find myself enjoying this book more often than I expected. The politics, trade discussions, and 'debates' between characters about society and culture were really fascinating and thought-provoking. I appreciated how much Wright explored the nuances of different cultures and both different and similar so many things are. It's an incredibly introspective novel with a lot to come away with, and I know it definitely made me think about a lot of different things. There are a lot of people that really seem to rave about this book and I can understand why, though I just don't think it hit me as deeply as it did others and I found myself slightly more annoyed at things than it seems from various reviews.

Overall, I'm giving Islandia 3.75 stars. It feels weird to take a book of this magnitude and boil it down to one small rating, but we're trying it anyway. There were a lot of issues, but it wasn't a bad book. There were a lot of fantastic discussions and themes explored. There were also a lot of issues that took away from my enjoyment. Would I recommend Islandia? That depends. If the concept of exploring a new land in our existing world that is full of intense, expansive world-building appeals to you, then I'd say absolutely give it a shot. If excessive descriptions bore you to tears and learning about the nuances of another culture isn't appealing, maybe not. All in all, I found it to be a fairly worthwhile read and I'm glad I decided to tackle it.