Most Disappointing Books of 2019 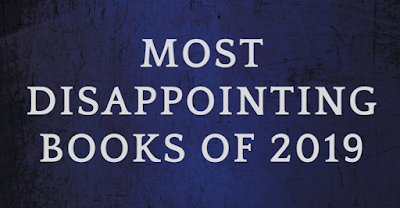 It's that time of year! As much as I hate saying bad things about books, I think we all enjoy seeing the books that most disappointed people. It's nice to see books that you also didn't like, or even ones that you loved so you can get a different perspective on why that person didn't like it. I didn't particularly hate any of these books, but these are all ones that just disappointed me in some way, whether it's because I had unfair expectations, it wasn't what I expected, or it just wasn't good. Below are a few of those that I felt disappointed me the most this year. Have you read any of them?

Golden State by Ben H. Winters
This was one where it had a really great concept, but the execution was so lacking. I loved the idea of exploring a world in which "compulsory truth-telling" is the law of the land and lies are regularly punished. Unfortunately, I found myself losing interest and feeling confused by the end. (Review)

Aurora Rising by Jami Kristoff & Amie Kaufman
I'm so disappointed that both this year and last year have a book written (co-written, in this case) by Jay Kristoff on my most disappointed list. I really enjoyed the Illuminae files that was co-written by Kaufman and Kristoff so I had high hopes for this one that sadly fell completely flat. This book was fast-paced and entertaining, sure, but the characters and plot were lacking and I just felt like I'd read this cast a million times before. It was a bit too far-fetched for me to enjoy and I don't think I'll be continuing with the series.
Amazon | Book Depository

Black Leopard, Red Wolf by Marlon James
I've seen so many raves for this book, but I think the 3.4 average rating on Goodreads is a bit more accurate to how I felt about it, although this ended up being a DNF for me. I tried so hard to push through and enjoy this book, but I just couldn't. The crudeness felt like it was done in an attempt to seem dark and edgy most of the time rather than for a plot-related purpose and the prose was unnecessarily complex. I was confused and couldn't make myself enjoy it despite how excited I was to read it.
Amazon | Book Depository

Westside by W.M. Akers
I didn't dislike this one by any means, but I was extremely disappointed by its execution since I had such high hopes for it. I think this book just tried to tackle a lot more than it should have and things felt to be in a bit of a disarray for me. (Review)

The Furies by Katie Lowe
This book was so promising with a dark school setting and a questionable group of friends, yet it somehow completely fell flat for me. It felt like an amalgamation of every other school-setting book I've read--and not in a good way. There was so much potential, but the school component was minimal, the "mysterious" teacher uninteresting, and the friendship among the girls was honestly a bit boring and cliche'd. (Review)

The Burning Chambers by Kate Mosse
This was another DNF. Kate Mosse is a fantastic writer and her historical fiction is usually great, but something about this one just didn't click with me. I found no attachments to any characters, the plot didn't really seem to be much of anything, and I just couldn't bring myself to care enough to keep reading it.

Wicked Saints by Emily A. Duncan
This was probably one of my greatest disappointments of the year as far as hyped expectations go. The pacing was inconsistent, the plot was unexciting, and I didn't care for or like any of the characters. I love the title and cover for this book so much, I just wish the content matched. Unfortunately, this is another series that I won't be continuing. (Review)

Emily Eternal by M.G. Wheaton
I'm still not even sure what happened by the end of this book. Emily Eternal started off with a really fascinating AI premise and a sort of doomsday scenario that was executed in a different manner than other books with similar setups. The first third to half of this book was interesting, though there were more than a few things that didn't feel explained properly, but somewhere in the middle this book just became a muddled mess. I'll admit that I skimmed through the last quarter or so because I had no idea what was going on and what I did understand was unbelievably far-fetched and I just didn't care anymore.
Buy the book: Amazon | Book Depository

At The Mountains of Madness by H.P. Lovecraft
Emotionally, this was probably my biggest disappointment! I love books set in an arctic environment and I love even more when there is something creepy or mysterious there. This story sounded right up my alley, but somehow it ended up being unimaginably boring? This was my first Lovecraft so I'm not sure if this is how all of his books are, but if so then I don't think I'll be checking more out. I'm not sure how Lovecraft managed to make one of the most fascinating premises and events of this book so hard to swallow, but it was a huge bummer. I still love the concept and what happened, I just wish it had been told a little differently. I get that it was in a journal-esque format, but it's still a book meant for entertainment at the end of the day.
Buy the book: Amazon | Book Depository