Review: A Secret History of Witches by Louisa Morgan 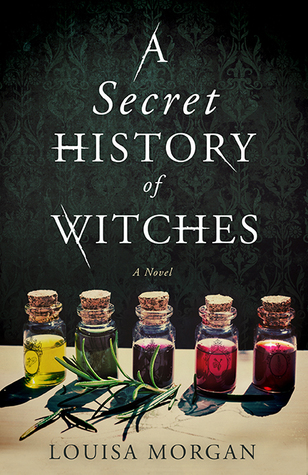 About A Secret History of Witches:


"An ancient and dangerous power is being handed down from mother to daughter through some of the most consequential historic events of the last two centuries.

After Grandmére Ursule gives her life to save her tribe, her magic seems to die with her. Even so, her family keeps the Old Faith, practicing the spells and rites that have been handed from mother to daughter for generations. Until one day, Ursule’s young granddaughter steps into the circle, and magic flows anew.

From early 19th century Brittany to London during the Second World War, five generations of witches fight the battles of their time, deciding how far they are willing to go to protect their family, their heritage, and ultimately, all of our futures."

I read The Witch's Kind, Louisa Morgan's second release, earlier this year and really fell in love with her writing and storytelling. I finally got around to picking up A Secret History of Witches recently and once again fell back in love with the charming, meaningful lives of some incredible witches from different periods of life.

A Secret History of Witches falls more into what I would call historical fiction with a touch of magic or maybe historical fantasy than it is straight up fantasy, but regardless of what you want to call it, there's no denying that it's magical and enchanting journey through the ups and downs of five generations of Orchiére witches.

The story begins in the year 1821 and continues until just past the end of World War II. It's a lot of time and history to cover, but Morgan managed to write it in a way that allowed it flow naturally. I'll be honest and say that I was slightly skeptical of how five entire generations could be explored in a book under five hundred pages, but I'm really impressed by how Morgan decided to explore the lives of each Orchiére daughter. I worried that there would be a bit of repetition at play and although there were elements throughout the generations that had similar elements and there tended to be patterns you could predict (which was a bit of a drawback at times), there was enough difference within each woman's life to make each snippet feel unique and engaging. It also made it feel almost like a folklore setup where there are similar main story elements, but they differ according to each specific story. At times, it almost felt as though I were reading interconnected novellas or short stories with how we got to experience a certain amount of time with each woman before encountering a momentous moment and moving onto the next, all while keeping the long Orchiére story and tradition alive in each one.

The Orchiére women we follow are Nannette, Ursule, Irène, Morwen, and Veronica. I found Morgan development of each woman really strong and well done and I was satisfied by how she managed to make each one's story unique in their own way. There were some that believed the magic from birth, some that were skeptical, some that liked their life, some that hated it--all of the emotions and family struggles that one might expect across five generation were present and made this book such a joy to explore. Of the five women, I would say I most enjoyed Nannette, Morwen, and Veronica's storylines and my least favorite was probably Irène's. Nannette really kicks off the story well with her strong passion for the tradition of her Orchiere witchcraft and understanding of the perils associated with it and Veronica wraps up the story nicely with a great example of her usage of the magic as well. Irene was the hardest for me to get behind (and frankly, I never really did) because of her ungratefulness to her mother and somewhat narcissistic-leaning personality. I appreciated some of her confidence and determination, but it was mixed with too much hatred and selfishness to grab me. I don't know if we were supposed to particularly like Irene or not, so I applaud Morgan for adding such a diverse group of women in this large story.

I really love the way that Morgan incorporated the witchcraft and magical elements to this story. The magic that exists is very much in the fashion of the sort of 'traditional' old-fashion witchcraft you might expect from the time periods this story covers. There are 'simple' spells made to help with small things like nausea, colds, sleeping, etc., as well as scrying stones, rituals, familiars, and a few more similar elements.

Watching the Orchiére family over give generations was truly exciting and it was so interesting to me to see how attitudes towards the witchcraft of the family differed throughout time. There was so much to explore in this book, from social views towards witchcraft and women to family struggles to struggles of social status and economics and so much, this book really has a little bit of something for everyone.

Overall, I've given A Secret History of Witches 4.5 stars! I was really pleasantly surprised by how Morgan wrote a multi-generational story in such a compelling and meaningful way. Definitely pick this one up if you like historical ficiton, witches, or stories that explore a lot of family dynamics and lore!