This week's topic is: Winter TBR

I still don't really make TBR lists for myself because I am far too much of a mood reader to ever be able to stick to anything, but I figured I'd make a list of a rather large selection of different books I'm hoping to catch up on and read over the next couple months. I decided to make his list a mix of backlist titles and ARCs so as to cover all bases of things I need/want to read. I won't read all of these by any means, but this is the selection I'll be focusing on (until I find other new shiny books to read, of course)! Are you able to follow TBRs or are you more of a mood reader like me? Or somehow both!?

The Ranger Marzanna by Jon Skovron: This one showed up from Orbit last week and I am in love with that cover! I don't usually care for people on covers or more 'cliche'd' types of covers, but something about this just feels so classic and makes me think of warm and inviting fantasy so I am going to do my best to read this really soon! (April 2020)

Legacy of Ash by Matthew Ward: I'd been wanting to read this one for a while, and then it showed up at my house from Orbit (honestly, I love Orbit so much)! (April 2020)

A Queen in Hiding by Sarah Kozloff: I just featured this on a Can't-Wait Wednesday post and I'm really excited to check it out! I'm also intrigued by the fact that all four books in the series will be released in four months. (January 2020)

Apeirogon by Colum McCann: I had never heard of this when it came to my house, but it sounds super intriguing and I'm also really drawn to that cover. This sounds like it will be a pretty deep read, so hopefully it's one I pick up in the next couple months! (February 2020)

Providence by Max Barry: I read another book by Max Barry years ago so I'm curious to see what this book will be like since I remember being impressed by some of the ideas he explored previously.

The Unspoken Name by A.K. Larkwood: I know next to nothing about this, but it looks promising! (February 2020)

Or What You Will by Jo Walton: Again, don't know much about it, but I know Jo Walton is a great author! (July 2020) 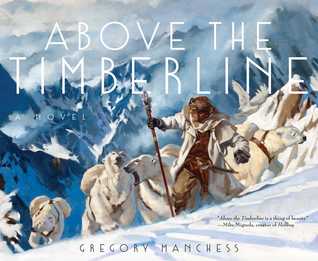 The Starless Sea by Erin Morgenstern: I think we're all probably excited to read this one, but I've been really wanting to save it for after the semester ended and I could relax a bit with it and enjoy it more. (I also splurged for that Goldsboro edition and it's so gorgeous.)

The Light of All that Falls by James Islington: I've been dying for this trilogy and it's finally out! Hoping to have a chance to dive into this behemoth of a book soon.

Apocrypha by Catherynne M. Valente: I've been holding on this short volume for a while as well because I am really dying to check it out. Valente has some of the most beautiful writing, but it's also rather dense as a result and I need to be able to take my time with it. Hopefully that happens soon!

Above the Timberline by: I am super excited about this book for a few reasons, the largest of which being that it's basically like an adult picture book (not erotica, though!). It's "about the son of a famed polar explorer searching for his stranded father, and a lost city buried under snow in an alternate future." Honestly, it's absolutely stunning and I haven't read it yet, but even if the plot sucks, I think it's worth it for you to check out for the imagery alone!

The Book of Dreams by Catherynne M. Valente: Another Valente book I'd like to get to. I'm not sure if I'll get to both, but one of them will hopefully be read by the end of the next couple months!

Deeplight by Frances Hardinge: I absolutely love the premise of this book and I'm definitely hoping to have a chance to dive into it, though I'm hesitant to since it's a special Goldsboro edition, but I'll just handle it with even more care than I usually do (if that's possible).

The Throne of the Five Winds by S.C. Emmett: I had planned to read a couple months ago before/near when it released, but it was much bigger than I expected and I didn't have time to squeeze it in when I wanted to! I really want to rectify that because it sounds like a really neat new (high) fantasy.

In the Heart of the Sea: The Tragedy of the Whaleship Essex by Nathaniel Philbrick: I love some true stories of ocean/water-related tragedy (which is odd since I'm fairly terrified of open ocean and will never be caught on a cruise of any sorts). I've been wanting to read this for a while and I think it'll fit it in well with the winter season.

Brideshead Revisited by Evelyn Waugh: Another one I've been dying to read for years! I love any of these classic academic settings and I'm really interested to see what this one is about.