Review: The Light of All that Falls (Licanius Trilogy #3) by James Islington 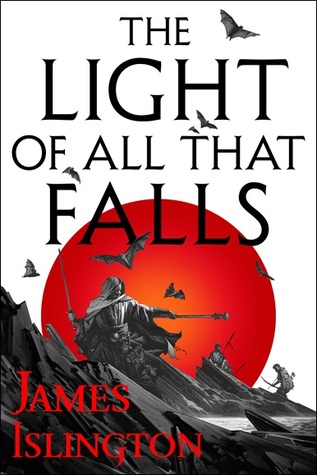 The Light of All That Falls (The Licanius Trilogy #3) by James Islington
Orbit
Publication Date: December 12th, 2019
Hardcover. 864 pages

**Note: This review will not contain any spoilers for The Light of All That Falls, but it will probably contain inadvertent spoiler-y events from the first two books. If you plan on reading the first two books and do not want to know anything, then you may want to skim this review. I don't go into details on anything, but just a head's up.
About The Light of All That Falls:

"The Light of All that Falls concludes the epic adventure that began in The Shadow of What Was Lost, the acclaimed fantasy blockbuster from James Islington.

The Boundary is whole once again, but it may be too late. Banes now stalk Andarra, while in Ilin Illan, the political machinations of a generation come to a head as Wirr's newfound ability forces his family's old enemies into action. Imprisoned and alone in a strange land, Davian is pitted against the remaining Venerate as they work tirelessly to undo Asha's sacrifice - even as he struggles with what he has learned about the friend he chose to set free. Finally, Caeden is confronted with the reality of the plan he laid centuries ago - heartbroken at how it began, and devastated by how it must end."

The Light of All That Falls was one of my most highly anticipated releases of 2019. My excitement level for this book has been nearly off the charts because of how invested I am in not only the plot of the story, but also because of how much I love all of the main characters (and, frankly, everyone else as well). This trilogy is easily one of the most stunning and breathtaking epic fantasy trilogies that I've read in quite some time. I know I tend to have a lot of favorites when it comes to fantasy, but the Licanius Trilogy truly is one that I will always hold close to my heart and that I will never stop recommending to everyone.

One of my favorite things that Islington does is provide a comprehensive "the story so far" style recap in the beginning of all of his sequels. Islington takes care to note that he doesn't cover everything that happens int he books, but rather highlight this main points and although that's true, this one was still over twenty pages long and I found it to be invaluable in refreshing my memory. This is a series that I have actively thought about ever since finishing the first and second books, but it still has so many intricate details and storylines that are easy to overlook.

Jumping into the story itself, The Light of All That Falls picks up about a year after the events of the second book, which I found to be a perfect amount of time to sort of get into the groove of the new routine and life for all of our characters after the intense and astonishing ending of the second book. I found this to be the perfect balance in kick-starting the events of the final book while showcasing what the "new normal" is like for all of our characters.

One of my favorite things about this series and what draws me to it so strongly is how much I genuinely love and care about the main characters, as well as the way in which Islington crafts both main and secondary characters in such fulfilling and incredible well-developed and multi-dimensional ways. Davian has been through such a whirlwind of events since the start of the first book and I have been so hooked on seeing how he works through all of the chaos that is almost constantly thrown at him. The way he hones with skills and always works to put doing what's right before what he or someone else might want or find easier is so admirable and is part of what makes him so compelling. Wirr also really embodies the idea of doing what is morally right over what is more convenient or what others want him to do. As a leader, Wirr struggles with his new role and I really like how Islington continued to show his struggles with earning acceptance from those around him, as well as with earning how to be a good leader. He's incredibly loyal and always puts the safety and well-being of the people in Ilin Ilan first, something that shines through and makes him so endearing. Then there's Asha, a incredibly powerful and resolute woman who makes an incredible sacrifice a the end of the previous book. Her adaptation to her role is one done with maturity and no matter how undesirable her current situation might be, she always makes the best of it to be as useful as she can possibly be. I love Asha's role in these books and I'm so pleased by her character arc throughout this series.

Lastly, I'd like to mention Caeden. Caeden is easily one of the most interesting and complex characters I've ever read. Without being too detailed so as to not spoil anything, the sheer transformation of his character over time is unbelievably fascinating and so well-written. What Islington tackled with Caeden's character is something that I don't think many people could pull off and Islington did it so well. The inner conflicts that Caeden deals with are so intense and authentic and I believed everything about his struggles. There's also his difficulties with trust and getting others to trust him when even he doesn't think people should always trust him. I can't really say more without spoilers, but suffice to say that Caeden is one of the most intriguing fantasy characters and has one of the most incredible character arcs that I've read in years, possibly ever. My hat's off to Islington for that alone, if not everything else.

This book has a huge cast of characters in addition to the main characters (seriously, I made use of the character glossary in the back of the book so often to make sure I remember who was who) and no matter how small or large a character's role in the story is, Islington still makes them real, authentic characters with distinct personalities, motivations, and incredibly development.

This book is full of some of the best twists and developments. There was one huge moment at the end that I sort of guessed early in a "gee, maybe this will happen, but probably not," and I let out the biggest whoop of satisfaction when it actually came to fruition. That's not to say that this book is predictable, though, because it most definitely isn't and I was mindblown over and over at how deep and utterly clever Islington is with his plot and sheer scope of exploration in this book. There is a bit of exploration with time travel-type elements that I loved, and that's coming from someone who typically doesn't like anything to do with time travel. As before, I can't go into details about all of that, but trust me when I say that it's so well done and utterly original and well-written.

I could say a lot more about the world, the creatures in the world, the magic system, and so many other things, but I fear this review is already too long (looks to be more than a thousand words already, which is way too many) so I'm just going to cut myself off here and implore you to check this series out!

Overall, it's an obvious five stars. I'd honestly give this series and this book all the stars that are out there--they deserve them. I already want to start re-reading the series, and I honestly might just go ahead and pick up the first book again later this year to start this incredible adventure all over again.


*I received a copy of The Light of All That Falls in exchange for an honest review. This has no effect on my rating of the novel.*

Email ThisBlogThis!Share to TwitterShare to FacebookShare to Pinterest
Labels: james islington, review, the light of all that falls