"In four new novellas, Christina Henry returns to the universe she created for Alice and Red Queen, where magic runs more freely than anyone suspects, but so do secrets and blood.

Girl in Amber
Alice and Hatcher are just looking for a place to rest. Alice has been dreaming of a cottage by a lake and a field of wildflowers, but while walking blind in a snowstorm they stumble into a castle that seems empty and abandoned...at least until nightfall.

When I First Came to Town
Hatcher wasn't always Hatcher. Once, he was a boy called Nicholas, and Nicholas fancied himself the best fighter in the Old City. No matter who fought him he always won. Then his boss tells him he's going to battle the fearsome Grinder, a man who never leaves his opponents alive.

The Mercy Seat
Alice has a secret--a secret that not even Hatcher knows yet, but pretty soon she won't be able to keep it from him."
I've loved every single book Christina Henry has written, including her Chronicles of Alice books, and I have been so eagerly anticipating the release of this collection of novellas! I'm also super partial to the UK cover of this book, so I figured I'd share that cover as well below, as I tend to do when I love both. :) 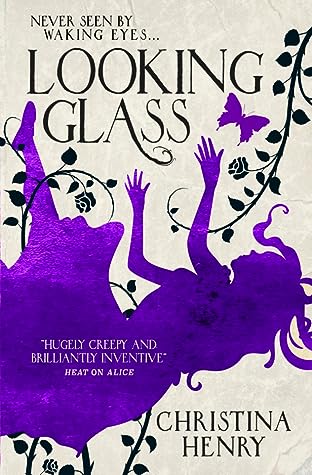 "New York Times-bestselling author Rae Carson makes a triumphant return to the world of her award-winning Girl of Fire and Thorns trilogy in this extraordinary stand-alone novel. With action, adventure, and a heroine set on destroying the patriarchal limits meant to keep her in her place, The Empire of Dreams once again proves that Rae Carson is a master of epic fantasy.

Even though Red Sparkle Stone is a foundling orphan with an odd name and a veiled past, she's about to be adopted into the royal family—by Empress Elisa herself. Sixteen-year-old Red can hardly believe her luck. Then, in a stunning political masterstroke, the empress's greatest rival blocks the adoption, and Red is left with no family and no future.

Grieving and lost, but determined to find her place, Red hatches a daring plan: she will prove herself as a recruit for the world's most elite fighting force, the legendary Royal Guard—something no woman has done before. But it's no coincidence that someone wanted her to fail as a princess, someone whose shadowy agenda puts everything she loves at risk. As danger closes in, it will be up to Red and her new friends—and maybe some new enemies—to save the empire. If they can survive recruitment year."
I still can't believe there's a new Fire and Thorns book coming out! I read the original trilogy so long ago that I know there is no way I can possibly jump into this without re-reading the entire trilogy again, which I've been wanting to do for a while, anyway. I think this is meant to be a sort of spin-off standalone so you might be able to read it without reading the prior trilogy (?), but I have no idea! I love the new covers for this trilogy as well, and I don't typically love cover remakes, though the originals will always be special to me.