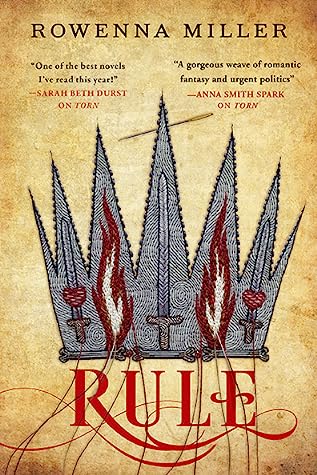 "The civil war that the charm caster Sophie and the Crown Prince Theodor tried so desperately to avert has come to Galitha. While Theodor joins Sophie's brother and his Reformist comrades in battle, hoping to turn the tide against the better-supplied and better-trained Royalist army, Sophie leverages the only weapon she has: charm and curse casting. She weaves her signature magic into uniforms and supplies procured with the aid of unlikely foreign allies, but soon discovers that the challenges of a full-scale war are far greater than the entrepreneurial concerns of her small Galithan dress shop. The fractured leadership of the Reformist army must coalesce, the people of Galitha unite against enormous odds, and Sophie create more than a little magical luck, in order to have a chance of victory."
I have been loving this trilogy and I am so incredibly excited for this finale! Sophie is a character that I have really grown to love and I've missed following her and this entire world and storyline.

"Cadence Archer arrives on Harvard’s campus desperate to understand why her brother, Eric, a genius who developed paranoid schizophrenia took his own life there the year before. Losing Eric has left a black hole in Cady’s life, and while her decision to follow in her brother’s footsteps threatens to break her family apart, she is haunted by questions of what she might have missed. And there’s only one place to find answers.

As Cady struggles under the enormous pressure at Harvard, she investigates her brother’s final year, armed only with a blue notebook of Eric’s cryptic scribblings. She knew he had been struggling with paranoia, delusions, and illusory enemies—but what tipped him over the edge? With her suspicions mounting, Cady herself begins to hear voices, seemingly belonging to three ghosts who walked the university’s hallowed halls—or huddled in its slave quarters. Among them is a person whose name has been buried for centuries, and another whose name mankind will never forget.

Does she share Eric’s illness, or is she tapping into something else? Cady doesn’t know how or why these ghosts are contacting her, but as she is drawn deeper into their worlds, she believes they’re moving her closer to the truth about Eric, even as keeping them secret isolates her further. Will listening to these voices lead her to the one voice she craves—her brother’s—or will she follow them down a path to her own destruction?"
I'm a sucker for any mysterious plot line set on a college campus or boarding school situation, so this one seems right up my alley! Ghost stories can be hit or miss in execution, but I'm hoping this one will be done well.