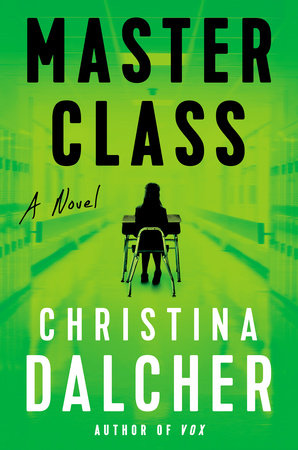 "It’s impossible to know what you will do…

Every child's potential is regularly determined by a standardized measurement: their quotient (Q). Score high enough, and attend a top tier school with a golden future. Score too low, and it's off to a federal boarding school with limited prospects afterwards. The purpose? An improved society where education costs drop, teachers focus on the more promising students, and parents are happy.

When your child is taken from you.

Elena Fairchild is a teacher at one of the state's elite schools. When her nine-year-old daughter bombs a monthly test and her Q score drops to a disastrously low level, she is immediately forced to leave her top school for a federal institution hundreds of miles away. As a teacher, Elena thought she understood the tiered educational system, but as a mother whose child is now gone, Elena's perspective is changed forever. She just wants her daughter back. And she will do the unthinkable to make it happen."

Master Class is a near-future dystopian-esque world in which all children are measured according to their Q, or quotient, which is measured according to standardized testing that is regular taken at all schools. This is promoted by the government as being for the benefit of all people and children, as it will allow higher scoring children to work in an academic environment that is better suited to their abilities, while those with lower scores are sent to, essentially, lower quality schools (though the government wouldn't call them that, of course!).

The concept of Master Class is fascinating to me, largely because the general premise is fairly believable as something that we could (or can?) see happening in our own schools and societies. The difference, of course, is that this has been accepted full force by the people and is the basic barometer for the entire society and future generations. There is no choice not to participate in this or homeschool your children, and if your children don't overexert themselves studying and being excellent at testing, they could be sent off to a boarding school of sorts, though we soon discover that it is not at all what it sounds like.

Elena Fairchild is our main protagonist and mother of two daughters, one of whom easily excels, and the other who isn't quite at the same level, but is of course still a perfectly intelligent and great girl. Elena was a mostly compelling character and I could mostly relate to her and a lot of her decisions in this story, though there were a few times when I felt myself questioning her quite a bit. She's not particularly memorable as a character, but she performs her role in the story well and is bold enough to keep things interesting. I appreciated how she slowly began to question things more and more and actually took action eventually when she felt it was necessary.

The pacing of Master Class was a little off an on and it made it difficult to stay focused at times. Sometimes it seemed like there was a lot happening and things went quickly, other times I felt like we would never reach the real meat and main event of the story. I think the pacing really did hinder some of my enjoyment at times and never really allowed for me to completely fall into the story movements.

I think one of my problems with this book was that I felt like I was being beat over the head with certain messages. I have no problems with books with strong messages or anything of that sort, but I don't necessarily need it completely spelled out for me multiple times in the book, and this is an issue that I think I also had with her previous book, Vox. In contrast, though, there were some metaphors and story elements that I think Dalcher tried to fit in, but that just didn't really fit as well as they should and just served to drag out the story in weird places.

And speaking of Vox, I think there were times when I nearly felt like I was reading the same book as Vox, or even some sort of continuation. Her protagonists are similar, their husbands are somewhat similar, the big campaigns that are changing the way the country works are similar...I get that this might just be Dalcher's sort of "brand" of story, much in the way authors like Louisa Morgan have similarities in world-building and the like, but this just felt repetitive at times. The pacing was and movement of events felt eerily similar, as if she just took the same general schedule of events from Vox and made new ones for this book. This could just be something that bothers me, and of course if you haven't read Vox then this is entirely irrelevant, but it's something that I felt I should point out.

Overall, I've given Master Class 2.75-3 stars. I wanted to like this a lot more than I did, but unfortunately it seemed to fall a little in the execution. If the premise is intriguing to you, then I'd suggest you give it a shot, but it just didn't work for me as much as I'd like. Still, it explores some really interesting ideas!


*I received a copy of Master Class courtesy of the publisher in exchange for an honest review. This has no effect on my rating of the novel.*

Amazon | Book Depository  | IndieBound
Posted by Jordan @ForeverLostinLiterature at 7:21 AM

Email ThisBlogThis!Share to TwitterShare to FacebookShare to Pinterest
Labels: review