Review: The Unsuitable by Molly Pohlig 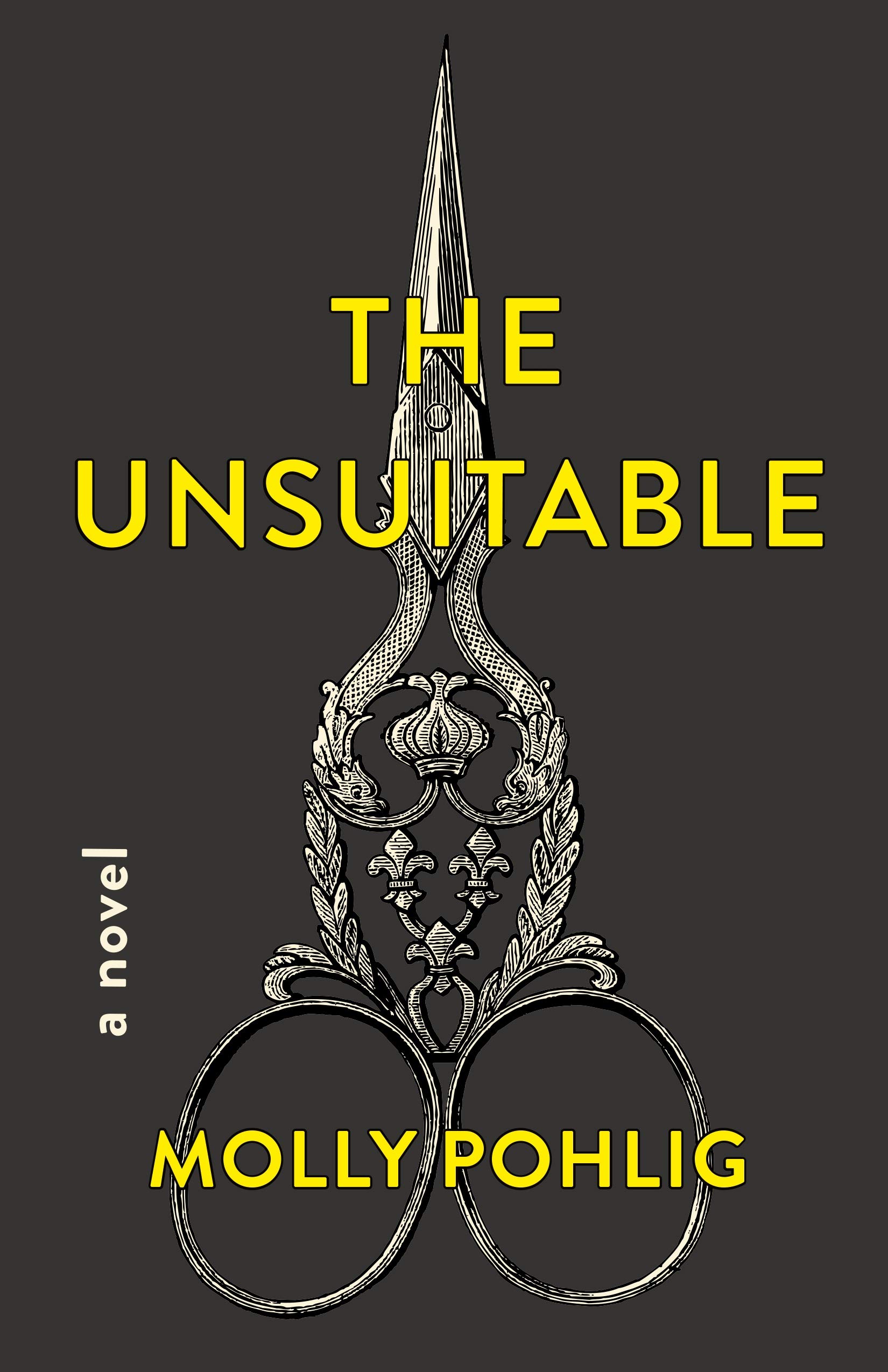 
"Iseult Wince is a Victorian woman perilously close to spinsterhood whose distinctly unpleasant father is trying to marry her off. She is awkward, plain, and most pertinently, believes that her mother, who died in childbirth, lives in the scar on her neck. Iseult’s father parades a host of unsuitable candidates before her, the majority of whom Iseult wastes no time frightening away. When at last her father finds a suitor desperate enough to take Iseult off his hands—a man whose medical treatments have turned his skin silver—a true comedy of errors ensues. As history’s least conventional courtship progresses into talk of marriage, Iseult’s mother becomes increasingly volatile and uncontrollable, and Iseult is forced to resort to extreme, often violent, measures to keep her in check.

As the day of the wedding nears, Iseult must decide whether (and how) to set the course of her life, with increasing interference from both her mother and father, tipping her ever closer to madness, and to an inevitable, devastating final act."

The Unsuitable was one of those books that sort of came out of nowhere and ended up being an incredibly surprising and pleasant delight. The book itself is something that I would consider to be rather dark, depressing, and disturbing, while also managing to be oddly quirky and even--dare I say--funny--always a winning combination, in my opinion! This book deals with some heavy topics ranging from possible mental health issues to graphic self harm and self-mutilation, so please be aware of that going into this if those are issues you may not want to read about.

The Unsuitable follows the life and mind of Iseult Wince as her father attempts to find a man suitable enough to marry her off to so that he can wash his hands of dealing with her as his daughter and move on with his life. Iseult is twenty-eight years old and still unmarried, a predicament at her age that means she is starting to enter territory where it becomes harder and harder to marry her off since she is so much "older" than the average marrying age. She has been predominantly raised by her housekeeper, Mrs. Pennington, since Iseult's mother died shortly after her birth and only her abusive father was left. The reason that Iseult is still unmarried at this age is due to her rather difficult disposition that has a lot to due with the fact that she believes the spirit of her dead mothers lives within her and speaks to her regularly, a problem that Iseult has found is lessened whenever she physically harms herself, which as you might imagine, poses some problems.

One of things that I enjoyed most about following Iseult's first person POV throughout the entire story was that it was never really possible to discern whether Iseult suffered from severe mental illness that prompted her to hear her mother and harm herself, or whether there really was an element of the supernatural at play. This led to an unreliable narrator situation that I think really added some overlaying intrigue to the entire story.

Iseult herself was a fascinating character to follow. She wavered between seeming incredibly astute and logical to struggle to think rationally whenever she heard her mother's 'thoughts' in her own head and would have conversations with her. Pohlig's wrote Iseult's POV and inner dialogue and ocnveyed her thoughts so well that I couldn't help but become so strongly invested in and connected to her character. I felt much more deeply for Iseult than I could have expected, and I felt like I was feeling all of the same ups and downs that she did. Along with Iseult is Mrs. Pennington, Mr. Wince, Jacob, and of course Iseult's mother that act as the most prominent supporting characters. Pohlig described all of these character so well and their personalities were so sharp and distinct that I really felt like I knew them myself. I became as overwhelmed and annoyed by Iseult's mother as Iseult did, I was disgusted with her father, I felt warmth towards Mrs. Pennington, and Jacob was someone that I genuinely liked and enjoyed all of the scenes with him. He was such a breath of logic and fresh air in a book that is otherwise full of difficult, dark, and irrational thoughts and plot movements.

The atmosphere of The Unsuitable has a notably creepy and dark overtone that can often be found in similar Victorian settings in books (and which I love), and no matter what happened plot-wise, there was always this eeriness lingering in the background that left me feeling distinctly unsettled whenever I picked this book up. In contrast, however, I found a darkly comedic note at play within Iseult's dry thoughts and the dialogue and interactions between Iseult and a potential suitor, Jacob. I'm not sure if I was supposed to be as amused by various parts of this book as I was, but I found such an ironic tone was present at different times that it just came across that way for me.

Overall, I'm giving The Unsuitable 4.75 stars! I didn't expect to give it such a high rating (for no real reason, I just didn't know what to expect!), but I really couldn't put it down and I felt so strongly connected to the characters that I couldn't help but become immensely invested in everything that happened.

*I received an ARC of The Unsuitable in exchange for an honest review. This has no effect on my rating or enjoyment of the novel.*