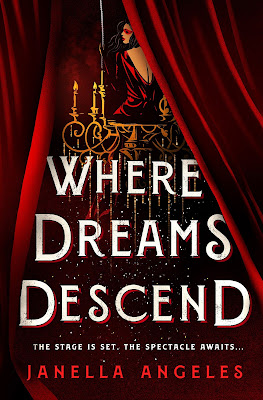 
SYNOPSIS:
“In a city covered in ice and ruin, a group of magicians face off in a daring game of magical feats to find the next headliner of the Conquering Circus, only to find themselves under the threat of an unseen danger striking behind the scenes.

As each act becomes more and more risky and the number of missing magicians piles up, three are forced to reckon with their secrets before the darkness comes for them next.

The Star: Kallia, a powerful showgirl out to prove she’s the best no matter the cost

The Master: Jack, the enigmatic keeper of the club, and more than one lie told

The Magician: Demarco, the brooding judge with a dark past he can no longer hide

Where Dreams Descend is the startling and romantic first book in Janella Angeles’ debut Kingdom of Cards fantasy duology where magic is both celebrated and feared, and no heart is left unscathed."

Where Dreams Descend is a lush and magical tale of mystery, intrigue, and a magical competition that takes unexpected turns at every corner. This is a story that overflows with secrets and characters who are never quite who they appear, which seems to match the magic and illusions that are a part of the competition.

Although it didn't seem like it at the time, there is a surprisingly large cast of characters to get to know throughout the story. Kallia was a character with much more confidence than I expected, and which I really appreciated. She doesn't let the harsh antics of the rest of the men in the competition get to her and never allows them to dim her own showmanship in any way. Her personality once at the magic competition seemed quite a change from what I expected from her personality at the very start of the novel when she was with Jack, but I enjoyed watching it develop and how she handled all of the many unpredictable circumstances.

Speaking of Jack, I can't say I ever fully understand who he was--I know what his role was, but I always felt slightly confused as to where exactly he came from and what his purpose was. However, I can definitely see the Phantom of the Opera comparisons with his role and the entire vibe that I got from his relationship with Kallia, though perhaps a little less magnetic than the Phantom, as Kallia has a pretty good head on her shoulders. I think one of my favorite characters was Aaros, Kallia's unforeseen thief-turned-assistant. His humor and levity absolutely made every scene he was in, and I found his burgeoning friendship with Kallia an absolute delight to follow. There are a lot of interesting relationship dynamics in this book that I found fascinating to follow, but Kallia and Aaros' really made my heart sing the most.

There are some really interesting worldbuilding components in this book, though I do wish that there had been just a bit more given in regard to the greater world at large. I felt that it was a bit limited in scope, which fit for this book, but also left me feeling as though I didn't have a great overall view of the world. That being said, the components that were present were really beautiful and I loved the mysterious background built up about the city and the use of magic and magicians. The Conquering Circus also sounds like such a magical and entertaining event and I loved getting descriptions of it!

And lastly, speaking of descriptions... Angeles' prose is truly beautiful. She really knows how to write some descriptive and stunning images that brought everything to life in this world. She not only describes static images beautifully, such as the plants in one character's greenhouse and the building where the competition is held, but also movements and dynamic images, such as Kallia's performances and her more intense moments with Jack.

Where Dreams Descend is a beautiful story that has a lot of potential to grow into something even more compelling and developed. It's easy to want to read to the sequel after the bit of a cliffhanger we get at the end, so be sure to keep your eye out for the next book!

EARLY PRAISE FOR WHERE DREAMS DESCEND:

"Where Dreams Descend is a glamorous dark gem of a tale, sparkling with romance, magic, and intrigue. Readers will be captivated by prima donna Kallia as the mystery is slowly unmasked. Bravissima!" - Julie C. Dao, author of Forest of a Thousand Lanterns

“Lavish and opulent in a way that feels warmly familiar yet demands your attention. There are secrets upon secrets, a girl who’s boldly ambitious, and truly riveting stage magic. I didn’t want the show to stop.” - Emily A. Duncan, New York Times bestselling author of Wicked Saints

"[A] spellbinding melody of a book, and the true magic is how Angeles puts all the best parts of an enrapturing theatrical performance onto paper and ink. From the gripping twists in the first pages all the way to the final, heartbreaking crescendo, Where Dreams Descend will surge you to your feet in a standing ovation.” – Sara Raasch, New York Times bestselling author of the Snow Like Ashes trilogy

JANELLA ANGELES is a Filipino-American author who got her start in writing through consuming glorious amounts of fanfiction at a young age—which eventually led to penning a few of her own, and later on, creating original stories from her imagination. A lifelong lover of books, she's lucky enough to be working in the business of publishing them on top of writing them. She currently resides in Massachusetts, where she's most likely to be found listening to musicals on repeat and daydreaming too much for her own good. Where Dreams Descend is her first book.