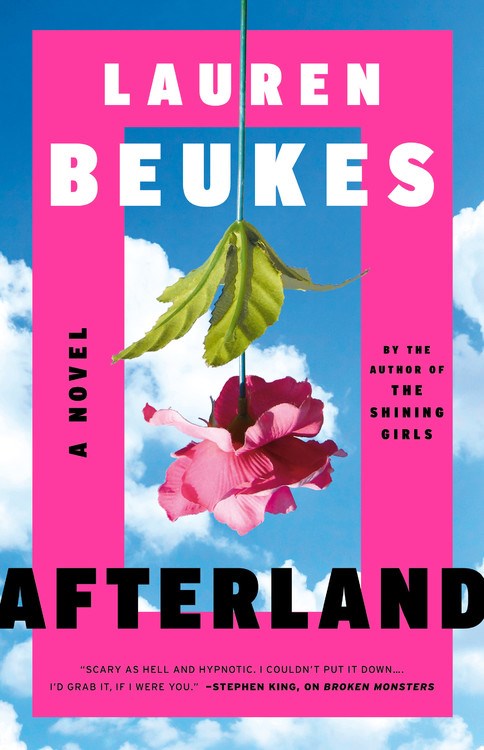 
"Most of the men are dead. Three years after the pandemic known as The Manfall, governments still hold and life continues -- but a world run by women isn't always a better place.

Twelve-year-old Miles is one of the last boys alive, and his mother, Cole, will protect him at all costs. On the run after a horrific act of violence-and pursued by Cole's own ruthless sister, Billie -- all Cole wants is to raise her kid somewhere he won't be preyed on as a reproductive resource or a sex object or a stand-in son. Someplace like home.

To get there, Cole and Miles must journey across a changed America in disguise as mother and daughter. From a military base in Seattle to a luxury bunker, from an anarchist commune in Salt Lake City to a roaming cult that's all too ready to see Miles as the answer to their prayers, the two race to stay ahead at every step . . . even as Billie and her sinister crew draw closer.

A sharply feminist, high-stakes thriller from award-winning author Lauren Beukes, Afterland brilliantly blends psychological suspense, American noir, and science fiction into an adventure all its own -- and perfect for our times."

Afterland was another one of those futuristic books set post-major event--in this case, a pandemic--that had such an interesting premise, but ultimately fell a bit flat in execution and the plot lines it chose to follow. I'm not really in the mood for a pandemic-focused novel myself, but since this took place mostly after the major events of the pandemic took place, and the fact that it mostly targeted men made it feel separate enough that I could actually enjoy this book!

Likes: The premise! What would society look like if all (or most) of the men were gone? A lot of places do have a more patriarchal society, so how would the power shift? What about all of the male-dominated fields, such as construction, law enforcement, engineering, etc.--are there enough women to take up all of the jobs around the country and world now? Although Beukes didn't go into these questions quite as in-depth as I might've liked, I still really enjoyed the aspects that she did explore and I think her depiction of the desperation, motivation, complacency, and other emotions that the women left experience was well done. The reproductive component of a world without men was another interesting topic that I felt Beukes did explore more as well, and I appreciated the detail she put into the possible solutions that might be explored.

Dislikes: There was not nearly as much focus on what the world is like post-major loss of men as I would have liked, and I feel like this really made the story suffer. The plot seemed to focus too heavily on minor plot points and situations that just didn't feel like they added much to the story. I wanted to hear more about the circumstances of all the characters we meet and how they are navigating in this world, not the weird injuries that the "bad guy" characters were struggling with and their conflicts between one another. Part of me does get that showcasing those tensions and issues is meant to be reflective of what life is now like and how chaotic things are, but it just felt frustrating and seemed as though the more predominate and interesting plot lines were being ignored. I was also curious about how gender identity and trans identity topics would be handled in this world, which Beukes didn't touch on as much. And on a quick last note, there's a weird religious part that pops up a little after halfway through was extremely tiresome for me; it felt like something I've seen in other books, and it also just took away even more from everything else happening.

Overall, I've given Afterland 2.75 stars. It had some really great ideas to play with and I enjoyed seeing how everything played out, but unfortunately there were too many other weird aspects that took away a lot from my reading experience.