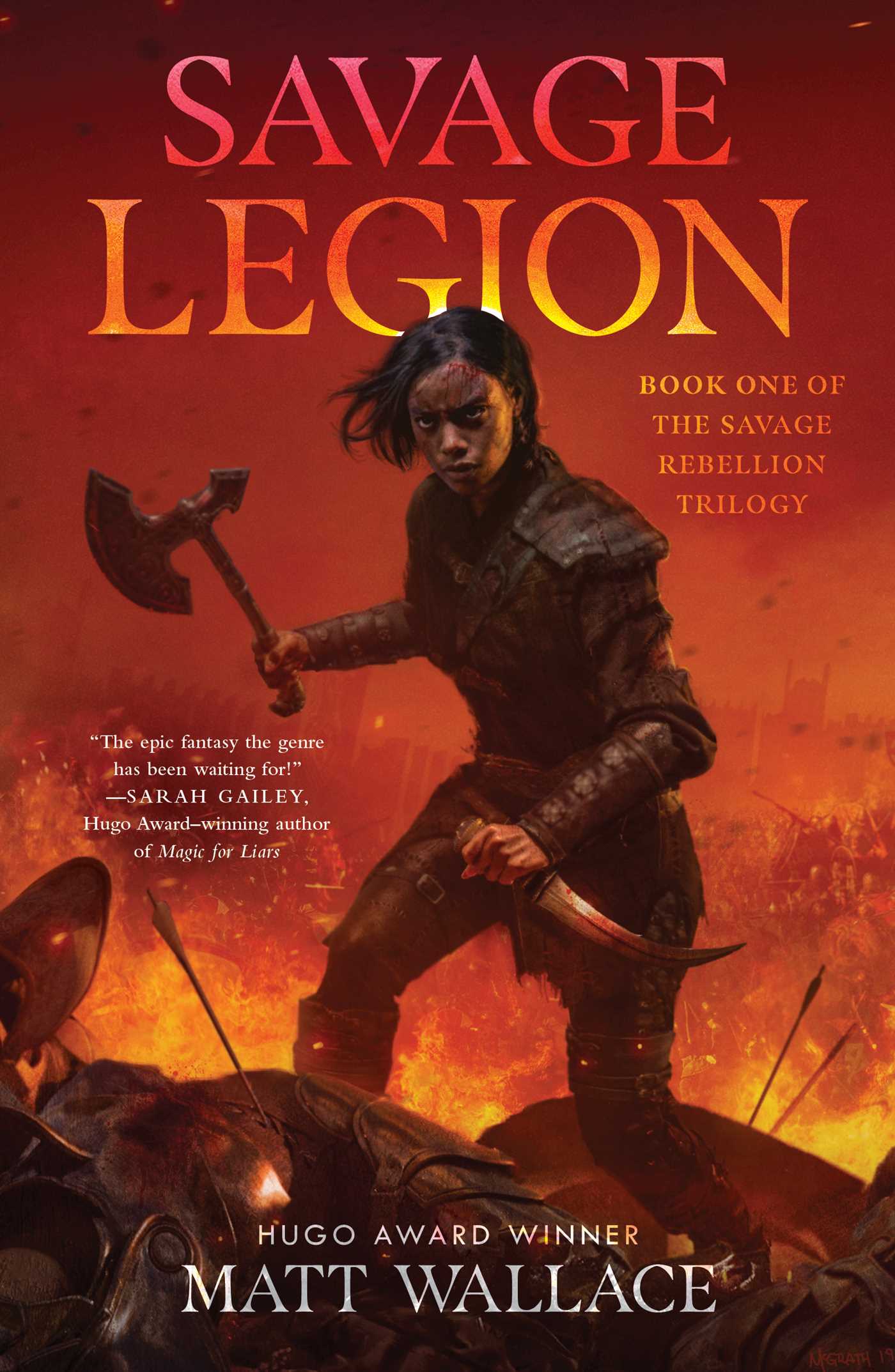 The empire relies on them. The Savages are the greatest weapon they ever developed. Culled from the streets of their cities, they take the ones no one will miss and throw them, by the thousands, at the empire’s enemies. If they live, they fight again. If they die, there are always more to take their place.

Evie is not a Savage. She’s a warrior with a mission: to find the man she once loved, the man who holds the key to exposing the secret of the Savage Legion and ending the mass conscription of the empire’s poor and wretched.

But to find him, she must become one of them, to be marked in her blood, to fight in their wars, and to find her purpose. Evie will die a Savage if she has to, but not before showing the world who she really is and what the Savage Legion can really do."

Savage Legion is one of the most pleasant surprises of 2020 thus far! I was excited to read Savage Legion and I knew it had a ton of promise, but I had absolutely no idea that I would be hooked almost immediately and that I would love this book even half as much as I ended up.

Savage Legion switches between three main POV segments. The first follows Evie, a woman who seems undaunted by most things she faces in life and sticks firmly to any task she is given--sometimes with a bit of ruthlessness to it, but mostly just because she's extremely efficient and loyal to what she has been tasked to do. Evie's story begins when she is taken to jail one night and transported to the military front the next day where she becomes a part of the Savage Legion, a group of people who have similarly broken the law and are now being utilized as diversions in battles. This Legion is essentially out first on the battle lines in order to provide a distraction before the trained military arrives. It's both brutal and ingenious at the same time, and I think this setup provided a lot of really interesting possibilities for the plot. (There are also 'blood coins' as a part of this process, an idea that I found particularly interesting, and of course a bit gruesome). Evie's chapters were easily some of the most exciting because you never really knew exactly what was going to happen, and as the story progressed things began to get more and more intense in ways that made it hard for me to stop reading.

The next person we follow is Lexie, a young woman who is learning how to navigate life as the sole remaining member of her family's Gens after her husband--who had been acting as the public defender for the faction of society that they represent (the lowest of the factions)--goes missing. His whereabouts are unknown, as is whether or not he is even alive, and Lexie must navigate the 'political' landscape on her own while trying to earn the respect of those around her, as well as carefully investigate her husband's disappearance--all while everyone seems to be working against her. I really appreciated Lexie's determination and how she overcomes her fears and uncertainties in order to do what she feels is best for the people she represents, as well as for herself and her husband. She is aided by her bodyguard Taru, who has labeled themselves as Undeclared, meaning that they are non-binary. This world seems to have mixed opinions of the Undeclared, with some finding them 'confusing' and others being perfectly accepting (much like in our own world), and I thought it was a great inclusion on Wallace's part to add a bit more experience and considerations to the book. I also really loved watching Lexie and Taru's relationship develop in this book as each started to have to trust and become more comfortable with the other over the course of the book's events.

And lastly we follow Dyeawan (aka Slider), an at-present homeless woman whose legs were crushed when she was a girl and who ingeniously gets around by a makeshift wheelchair of sorts in which she can slide around to get places (hence the name 'Slider'). Slider is first introduced on the same night that Evie gets hauled off to jail, but instead of being taken to aid the military in the Savage Legion, Slider is instead whisked off to an unknown place where she works with other scholars under the leadership of a man named Edgar to build and invent new devices, ideas, buildings, etc. for the empire. Slider was one of my favorite POVs to follow because I found the entire premise of where she was and what everyone there was doing so fascinating and full of ideas to explore. I won't say too much about it because I think a lot of it hinges on the experience of discovering for yourself, but Wallace excelled in developing this part of the story and introducing some really neat engineering concepts and executions, as well as introduced us to a lot of really varied and compelling side characters that I really would have loved to spend even more time with. I really enjoyed hearing about what everyone was working on and how Slider was tested for her own skills and fit in with everyone.

I thought the pacing of Savage Legion was spot on. I've seen a few reviews mention that the pacing felt a bit slow, but I really don't see that from my reading experience. Lexie's chapters were the slowest of the three, but they still had some compelling plot developments and crucial worldbuilding included that I loved learning about. There was a great balance of action, plotting, and character development, and I found myself particularly enjoying the latter two in this book as well, as things just continued to get more and more sinister as the story progressed. There's also a great amount of social commentary present in Savage Legion that felt both timely and compelling. It wasn't done in an overhanded way, but it provided some strong thematic backdrops for a lot of what occurs in this sort of dystopian-esque landscape that is slowly unveiled over the course of the story.

Lastly, I really loved Wallace's worldbuilding, as it seemed to have the perfect blend of complexity and variety, as well as being conveyed in a manner that didn't leave me feeling lost or confused. I actually felt as those I understood this world thoroughly by the end of the book, but there are still plenty of things that I want to explore more and learn more about in future installments. I think that there is a lot of potential in these books for the world to keep expanding outward, both physically and with cultural/etc. developments, and I truly cannot wait to see what's next in this series/trilogy!

Overall, this was an easy (yet unexpected in the best way!) five stars from me! I am a new Matt Wallace fan and I intend to check out some of his backlist titles while I anxious await the next installment in the Savage Rebellion series!

*I received a copy of Savage Legion in exchange for an honest review. This has no effect on my rating of the novel.*