Blog Tour: Road Out of Winter by Alison Stine -- Excerpt! 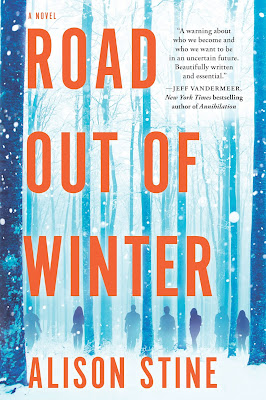 
SYNOPSIS:
“Surrounded by poverty and paranoia her entire life, Wil has been left behind in her small Appalachian town by her mother and her best friend. Not only is she tending her stepfather’s illegal marijuana farm alone, but she’s left to watch the world fall further into chaos in the face of a climate crisis brought on by another year of unending winter. So opens Alison Stine’s moving and lyrical cli-fi novel, ROAD OUT OF WINTER (MIRA Trade; September 1, 2020; $17.99).

With her now priceless grow lights stashed in her truck and a pouch of precious seeds, Wil upends her life to pursue her mother in California, collecting an eclectic crew of fellow refugees along the way. She’s determined to start over and use her skills to grow badly needed food in impossible farming conditions, but the icy roads and desperate strangers are treacherous to Wil and her gang. Her green thumb becomes the target of a violent cult and their volatile leader, and Wil must use all her cunning and resources to protect her newfound family and the hope they have found within each other." 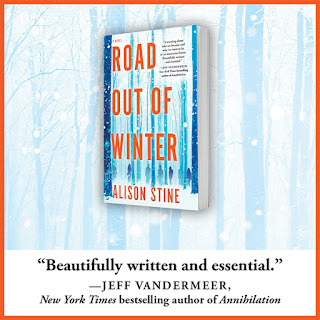 I used to have dreams that Lobo would be arrested. The sheriff and his deputies would roll up the drive, bouncing on the gravel, but coming fast, too fast to be stopped, too fast for Lobo to get away through the fields. Or maybe Lobo would be asleep, and they would surprise him, his eyes red, slit like taillights. My mama and I would weep with joy as they led him off. The deputies would wrap us in blankets, swept in their blue lights. We were innocent, weren’t we? Just at the wrong place at the wrong time, all the time, involved with the wrong man—and we didn’t know, my mama didn’t know, the extent.

But that wasn’t true, not even close.

I sold the weed at a gas station called Crossroads to a boy who delivered meals for shut-ins. Brown paper bags filled the back of his station wagon, the tops rolled over like his mama made him lunch. I supposed he could keep the bags straight. That was the arrangement Lobo had made years ago, that was the arrangement I kept. I left things uncomplicated. I didn’t know where the drugs went after the boy with the station wagon, where the boy sold them or for how much. I took the money he gave me and buried most of it in the yard.

After his station wagon bumped back onto the rural route, I went inside the store. There was a counter in the back, a row of cracked plastic tables and chairs that smelled like ketchup: a full menu, breakfast through dinner. They sold a lot of egg sandwiches at Crossroads to frackers, men on their way out to work sites. It was a good place to meet; Lisbeth would come this far. I ordered three cheeseburgers and fries, and sat down.

She was on time. She wore gray sweatpants under her long denim skirt, and not just because of the cold. “You reek, Wil,” she said, sliding onto the chair across from me.

“Lobo says that’s the smell of money,” I said.

The food arrived, delivered by a waitress I didn’t know. Crinkling red and white paper in baskets. I slid two of the burgers over to Lisbeth. The Church forbade pants on women, and short hair, and alcohol. But meat was okay. Lisbeth hunched over a burger, eating with both hands, her braid slipping over her shoulder.

“Heard from them at all?” she asked.

“You think he would let her write you? Call?”

“She doesn’t have her own phone,” I said.

Lisbeth licked ketchup off her thumb. The fries were already getting cold. How about somethin’ home made? read the chalkboard below the menu. I watched the waitress write the dinner specials in handwriting small and careful as my mama’s.

And it was, still. Steam webbed the windows. There was no sign of spring in the lung-colored fields, bordered by trees as spindly as men in a bread line. We were past forsythia time, past when the squirrels should have been rooting around in the trees for sap.

“What time is it now?” Lisbeth asked.

I showed her my phone, and she swallowed the last of her burger.

“Choir rehearsal.” She took a gulp of Coke. Caffeine was frowned upon by The Church, though not, I thought, exclusively forbidden. “I gave all the seniors solos, and they’re terrified. They need help. Don’t forget. Noon tomorrow.”

The Church was strange—strange enough to whisper about. But The Church had a great choir; she had learned so much. They had helped her get her job at the high school, directing the chorus, not easy for a woman without a degree. Also, her folks loved The Church. She couldn’t leave, she said.

She paused long enough to tilt her head at me. “Wylodine, really? Graduation, remember? The kids are singing?”

“You promised. Take a shower if you been working so my folks don’t lose their minds.” “If they haven’t figured it out by now, they’re never going to know,” I said, but Lisbeth was already shrugging on her coat. Then she was gone, through the jangling door, long braid and layers flapping. In the parking lot, a truck refused to start, balking in the cold.

I ordered hot chocolate. I was careful to take small bills from my wallet when I went up to the counter. Most of the roll of cash from the paper bag boy was stuffed in a Pepsi can back on the floor of the truck. Lobo, who owned the truck, had never been neat, and drink cans, leaves, and empty Copenhagen tins littered the cab. Though the mud on the floor mats had hardened and caked like makeup, though Lobo and Mama had been gone a year now, I hadn’t bothered cleaning out the truck. Not yet.

The top of the Pepsi can was ripped partially off, and it was dry inside: plenty of room for a wad of cash. I had pushed down the top to hide the money, avoiding the razor-sharp edge. Lobo had taught me well.

I took the hot chocolate to go.

In the morning, I rose early and alone, got the stove going, pulled on my boots to hike up the hill to the big house. I swept the basement room. I checked the supplies. I checked the cistern for clogs. The creek rode up the sides of the driveway. Ice floated in the water, brown as tea.

No green leaves had appeared on the trees. No buds. My breath hung in the air, a web I walked through. My boots didn’t sink in the mud back to my own house in the lower field; my footprints were still frozen from a year ago. Last year’s walking had made ridges as stiff as craters on the moon. At the door to my tiny house, I knocked the frost from my boots, and yanked them off, but kept my warm coveralls on. I lit the small stove, listening to the whoosh of the flame. The water for coffee ticked in the pot.

I checked the time on the clock above the sink, a freebie from Radiator Palace. 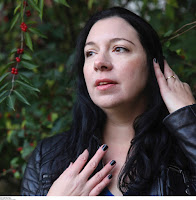 ALISON STINE lives in the rural Appalachian foothills. A recipient of an Individual Artist Fellowship from the National Endowment for the Arts (NEA), she was a Stegner Fellow at Stanford University. She has written for The Atlantic, The Nation, The Guardian, and many others. She is a contributing editor with the Economic Hardship Reporting Project. 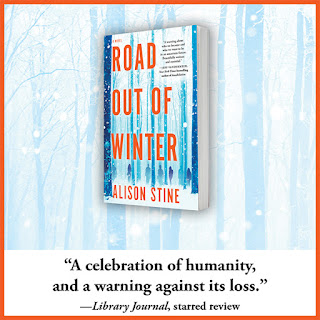