Review: The Invisible Life of Addie LaRue by V.E. Schwab 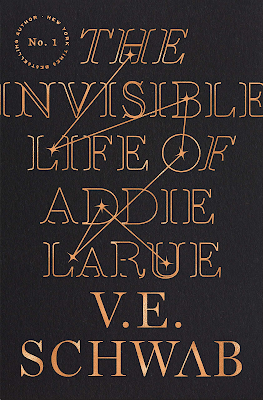 About The Invisible Life of Addie LaRue:


"A Life No One Will Remember. A Story You Will Never Forget.
France, 1714: in a moment of desperation, a young woman makes a Faustian bargain to live forever and is cursed to be forgotten by everyone she meets.
Thus begins the extraordinary life of Addie LaRue, and a dazzling adventure that will play out across centuries and continents, across history and art, as a young woman learns how far she will go to leave her mark on the world.
But everything changes when, after nearly 300 years, Addie stumbles across a young man in a hidden bookstore and he remembers her name."

V.E. Schwab can be very hit or miss with me, so I wanted to be excited for this book, but at the same time I was ever so slightly hesitant and skeptical of getting my hopes up. Fortunately, I really ended up enjoying this book and I think it was a really beautiful exploration of time, memory, and what it means to really live.
This is a story about Addie LaRue, a woman who is cursed to never age and never die, yet also to never be remembered by anyone. It is also a story about a young woman who wants nothing more than to have her own free will and to live her life as she pleases without being tied to anything or forced to do anything she does not wish to. And then there is Henry, a bookstore owner who simple feels too much and is struggling to find his own place in life. The story is about a lot of things and begins at many points, but the point that really acts as a catalyst for this story is when Addie meets Henry and discovers that things with him aren't quite as they are with other people--because, first and foremost, he remembers her name.
Addie was such an interesting character and one of my favorite parts of this books was simply following her along in her many years of life and watching how she adapted to essentially being immortal while also never being able to make connections or friends or simply meet anyone who remembers her for longer than a day at most--more often, they only remember her for the brief time she is around them and simply walking into another room can prompt them to simply forget who Addie is. She's also an incredibly independent and headstrong woman and I genuinely enjoyed watching her confidence grow throughout her years. Living from 1714 to the present time would have a pretty big whiplash effect on someone I would think, but I also suppose living through it would cause many of the changes to feel more gradual and not as affecting. Still, I think one of my only complaints is that I wish we had gotten to hear a bit more commentary from Addie about what it has been like to live through so much history and see the world change, and maybe even hear what her thoughts are on some of the biggest issues in the world. I do, however, understand that that isn't necessarily what this book was about and I know why Schwab didn't include as much on that as other areas, but it still is something I would have really enjoyed.
Henry is probably the character I most enjoyed, as I found his struggle with having too many emotions and feeling too much as I am someone who is considered a "sensitive" person, which basically means that I, too, feel far more than I should about everything. Henry's introduction to the story was done in a really exciting yet subtle way, and I found his own story and background engaging as well. I don't want to actually say too much about Henry because I think it would be a little too close to spoiler territory, but just know that Henry was a really well-developed character with some really great lessons that he both has already learned and that he learns throughout the story.
The pacing of The Invisible Life of Addie LaRue is on the slower, more thoughtful side. This isn't a page-turning thriller that will keep you constantly on the edge of your seat anxious for more. Rather, it's the sort of story that has such a compelling premise and beautifully told tale that you still do constantly want to know what will happen next. I'll admit, however, that there were times when I felt Schwab dragged on a little too long in some parts or where I eflt the story wasn't really moving. There were times when I wasn't entirely what the plot was--whether it was meant to simply follow Addie on her neverending journey or whether there was something more (there was!), and because of this my focus occasionally wavered. Overall, though, I found that I captivated for the majority of the story and genuinely found it to be an engaging and worthwhile read.
Overall, I've given The Invisible Life of Addie LaRue 4.5 stars! This is a really beautiful story that I know will be a hit for many. It's a thoughtful read that doesn't have many fast-paced or high action moments, but it's a wonderful character study and discussion of some fascinating themes about time, memory, and more. If you're a hesitant V.E. Schwab reader like me, I'd encourage you to take a chance and check this one out!
*I received a copy of The Invisible Life of Addie LaRue in exchange for an honest review. This has no effect on my rating of the novel.*