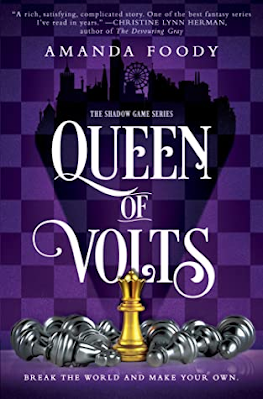 About Queen of Volts:


"Return to the City of Sin, where the final game is about to begin…and winning will demand the ultimate sacrifice. Only days after a corrupt election and brutal street war, one last bloodthirsty game has begun. The players? The twenty-two most powerful, notorious people in New Reynes. After realizing they have no choice but to play, Enne Scordata and Levi Glaisyer are desperate to forge new alliances and bargain for their safety. But while Levi offers false smiles and an even falser peace to the city’s politicians, Enne must face a world where her true Mizer identity has been revealed…and any misstep could turn deadly. Meanwhile, a far more dangerous opponent has appeared on the board, one plucked right from the most gruesome legends of New Reynes. As the game takes its final, vicious turn, Levi and Enne must decide once and for all whether to be partners or enemies. Because in a game for survival, there are only losers… And monsters."

Queen of Volts was a truly brilliant and epic finale that I am more than satisfied with--but I'm also so upset to be done with this world and these characters!
This is one of those reviews that's almost hard to write in a way because how do you adequately and succinctly review a trilogy finale that has meant so much to you and was just as good as--if not better--than the rest of the series? I'll do my best, but no promises!
I have absolutely loved getting to know all of these characters and their completely troubled, messed up selves as they navigate the chaos of living in The City of Sin and learning both who and not to trust. I really think The Shadow Game series is one those critically underrated series that has so much depth and intrigue, yet I just don't see as many people talking about this series as I would expect. This is a story that has been so carefully plotted and contains so many different mysteries, plot lines, character relationships, and more that it's hard not to become fully immersed int his world--and to be extraordinarily sad to leave it.
Although the plot and action in Queen of Volts are compelling and well-written, the characters are what really make this book--and the entire series--something truly special for me. Not only is there a rather large array of characters, but the diversity, authenticity, and sheer growth and development of each one make them shine and truly make this book impossible to put down. There are some unbelievably difficult decisions that must be made in this book that I could even begin to imagine making, and seeing how Foody writes these situations creates a rather remarkable experience.
Levi and Enne remain what I'd call the centerfold of this story and remain so in Queen of Volts, but it's the rest of the characters--Lola, Grace, Harvey, Roy, Harrison, Sophie, etc.--that fill the story with even more life and excitement. Watching all of them interact in different ways and with relationships that are ever-dynamic and always unpredictable adds a strong level of intrigue and even anxiety because you truly never know what's going to happen next, this entire series has felt incredibly unpredictable throughout. It's also a pretty brutal book, all things considered, and I have enjoyed how the different dark places that Foody chose to explore in such careful ways. There are some unforgivable things that occur, along with difficult things that are possible forgivable, but still immensely difficult to get through, and I think Foody handled these well. The POVs we follow in this book are that of Levi, Enne, Harvey, Sophia, and Lola, a group of characters that I think were the perfect choices for this particular book. Each POV felt unique and separate from one another, so I never had any issues figuring out what perspective I was following, and I love that we've gotten to explore so many different characters' perspectives over the duration of the trilogy.
Even though this is a nearly 600 page book, it flows incredibly well and I flew threw it without even noticing. The pacing is almost effortlessly wonderful (although I have no doubt that Amanda Foody worked extremely hard on it because she is an incredibly dedicated and diligent author) and never feels too slow or too fast--there was almost always a nearly perfect balance to me.
Overall, I've given Queen of Volts five stars! I have enjoyed this series so much and it has only grown in it's quality, depth, charm, and maturity as the trilogy progressed. If you haven't read this trilogy, I highly commend you do so--and if you have but haven't yet picked up this final installment--do it!


*I received a copy of Queen of Volts in exchange for an honest review. This has no effect on my rating of the novel.*