Book vs. TV Show Review: The Terror by Dan Simmons

I've never really done a review that features both the original book and television adaptation, but since I've recently read/watched both, I figured now would be the perfect time to do so--plus, both are perfect picks for October! The Terror is one of those books I'd been meaning to read for years, so I was excited to finally pick it up this month (and loved it!). I'd also been wanting to watch the adaptation ever since I saw it was being  made, but I wanted to read the book first, and since I finally read the book my husband and I decided to dive into the show. Now let's review both and see which I enjoyed more! 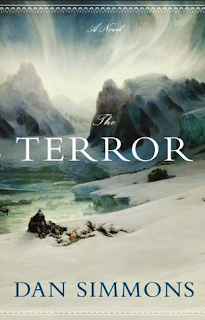 The Book: The Terror by Dan Simmons
Hyperion | Hardcover | 769 pages

The Terror is a fairly huge tome about the tragic Franklin expedition that set off in 1845. It's a fictional account, and as such there are of course some liberties taken in relation to the actual events that occurred on the expedition, including a supernatural element involving an unknown something that is essentially stalking and hunting Captains Franklin's and Crozier's crews. I'll go ahead and be upfront about the fact that I am a huge antarctic/arctic/exploration/sea disaster fan and for some reason I love learning about true sea and exploration disasters that have occurred (such as Shackleton's, which is my favorite!), so this was already a huge draw to me and I didn't even need the supernatural elements. Still, I really appreciated how Simmons worked these elements into a cohesive story that featured two types of horror--that from the survival efforts these men are put through as well as the horror of not know what is out there and waiting to kill you. Also, I'll give a warning for some strong gore/violence described throughout before diving into the review.

The Terror has a surprisingly slower pace than you might expect in a "horror" story of sorts, as there's a large amount of exposition, as well as extensive descriptions and background given to each character. We switch off between quite a few different POVs and Simmons takes time with each man to really allow the reader to get inside their head and feel connected to each person, no matter whether you like them or not. I've seen some complaints about Simmons taking too long to get to the point or spending too much time on background and description and I think those are very valid complains; however, for my taste, I think they worked really well in drawing more connections between the reader and everything going on, which in turn raised the stakes and kept me feeling more invested in everything that happened. There are a lot of men on this expedition, so it's helpful to have some ways of remembering who's who, at least among the most important players. I thought the pacing worked incredibly well for the story because it easily helped to draw out the suspense and exacerbate the truly (Horrifying) conditions that the men face.

The horror elements of this book were executed exceptionally well. I honestly think the horror could have been achieved without the beast at all, as the conditions and continuous setbacks the men faced were terrifying enough on their own. The beast, however, not only added another threat towards the men, but increased feelings of despair, loss of control, and uncertainty to levels that made me constantly wonder how some of these men even managed to stay as sane as they did. I kept getting similar feelings while reading this that I had while reading A Little Life--that consistent dread and hopelessness that permeates everything and made just know that things were constantly going to get worse rather than better and to question what the point even was at times.

This book was a tragic, brilliant story, and I would highly recommend it to anyone that enjoys a sort of slow-burn story of terror and tragedy. 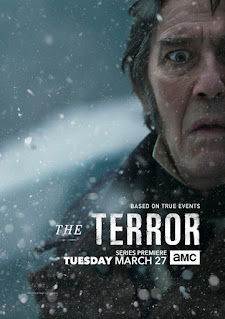 I  knew going into this that even at ten episodes, this show would not be able to fully incorporate everything from the near 800-page book, and I was right. I knew that there would have to be some liberties taken, some storylines removed, and various plot points rearranged. Still, I found myself both impressed and disappointed at how this occurred throughout the show. But first, let's talk about the show on its own without comparing to the book.

The Terror does an excellent job of creating a cold, bleak atmosphere full of men who are frustrated to be stuck where they are, but determined to make it through. I should also warn you that this show does not skimp on the gore, and there's quite a bit. I didn't actually mind it as much as I might've thought I would, but if that's something you're at all sensitive too, just know that there a lot of instance of fairly intense gore and intense scenes (and as someone who deals with rather strong emetophobia, I was immensely pleased and surprised to see that there were no scenes of men getting physically sick, though, and I'll take gore over that any day!).

One thing that I really didn't like about this show, however, is that you start getting glimpses of the creature pretty soon into the show and you do eventually see the entire creature, which  I found almost made it less scary? It's still a pretty intense beast, but I still found myself a little disappointed to actually see this weird scary monster attacking them, as it took away a bit of that unknown element that tends to make things scarier. Something that the show did do well, however, was its characterization and the acting of the characters themselves. I appreciated how well the story developed the characters throughout and allowed viewers to really get to know them and become invested in their storylines. There were only a handful of points throughout where I felt something was a bit off or the plot felt rushed, so overall I'd say this was a pretty solid and worthwhile show--great for the spooky season!

Now, looking at the The Terror from an adaptation perspective... let's just say that if you're a book-to-movie purist, then you'll probably be frustrated by quite a lot of things--I know I was. Characters and character relationships were tweaked in various ways (for instance, Crozier and Franklin really hate each other in this version, and Crozier and Sophia's relationship seems a bit off as well; similarly, Hickey's role is a bit more pronounced throughout the entire show than it is in the book), though I understand the need to do this in some cases. I was slightly disappointed in the last few episodes with the liberties they took with a few of the characters' choices, as I felt as though they really destroyed the attitude and morals of some of the character that had been built up so strongly and were so important to the book (ahem, Dr. Goodsir's character in particular). I was also frustrated by how they changed Lady Silence's interactions with the crew, but I do appreciate that this interpretation gave her slightly more agency. Again, I can see why certain things are necessary in a show where you don't have as much information available in the narrative, but still, it was frustrating. Also, why were some of these men wearing fingerless gloves and clothing not nearly warm enough at times!? It was temperature down to -100, so that was a huge inconsistency .

I found that many of the major attack scenes were kept true to form, though some events like the Carnivale were executed differently from the books, as well as other larger plot points. The last three episodes or so really start taking extreme turns in direction and in adding scenes and plot digressions that didn't exist in the books an that I found a bit confusing at times as well. I watched this with my husband, who hasn't read the book, so I made sure to ask him for his more objective view of the plot and he said that even he felt a few events from the latter couple episodes were a bit odd and frustrated him. I don't think these ruined the viewing experience by any means, but it does make me question some of the decisions made by the writers. The ending choices and a majority of the major plot events that happen in the last few episodes are almost a 360-degree difference from the book and I was so frustrated. I asked my husband how it was from his non-book perspective, and he again said that he really liked the show up until the last few episodes due to a lack of character development for some characters and weird plot choices that left him (and myself, to be honest), very confused.

Overall, I think it's obvious that I enjoyed the book more (but to be fair, that's probably expected!). Still, I had a great time watching the show (until the end, at least) and getting to see all of the characters I had grown to know so well brought to life. The atmosphere is wonderfully executed, the makeup and costuming was spot on and very much in line with the progressive deterioration of the men and their conditions, and I found myself immersed in this bleak, deadly world. I would absolutely recommend this show if you like survival stories or some rather bleak horror-type show for the month of October that's slightly different from your typical spooky show.