Review: Among the Beasts and Briars by Ashley Poston 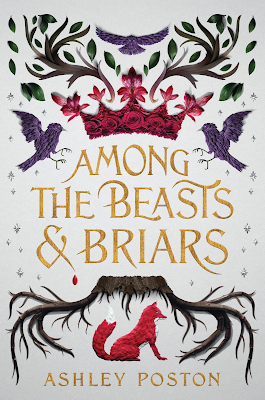 About Among the Beasts and Briars:


"Cerys is safe in the kingdom of Aloriya.
Here there are no droughts, disease, or famine, and peace is everlasting. It has been this way for hundreds of years, since the first king made a bargain with the Lady who ruled the forest that borders the kingdom. But as Aloriya prospered, the woods grew dark, cursed, and forbidden. Cerys knows this all too well: when she was young, she barely escaped as the woods killed her friends and her mother. Now Cerys carries a small bit of the curse—the magic—in her blood, a reminder of the day she lost everything. The most danger she faces now, as a gardener’s daughter, is the annoying fox who stalks the royal gardens and won’t leave her alone.
As a new queen is crowned, however, things long hidden in the woods descend on the kingdom itself. Cerys is forced on the run, her only companions the small fox from the garden, a strange and powerful bear, and the magic in her veins. It’s up to her to find the legendary Lady of the Wilds and beg for a way to save her home. But the road is darker and more dangerous than she knows, and as secrets from the past are uncovered amid the teeth and roots of the forest, it’s going to take everything she has just to survive."
I just recently read an interview with Ashley Poston where she said that with Among the Beasts and Briars she really wanted to create a YA fantasy that wasn't quite as dark as everything else that seems to be on the market lately and that has a happy ending, and I think she hit those notes perfectly.
Among the Beasts and Briars is a magical fairytale that will take you on a dazzling journey that is full of wit and humor and charm while still also incorporating some darker themes and elements that gave this book the perfect amount of creepiness while still retaining it's hopeful air. The story really takes off when Cerys, the daughter of the royal gardener, is thrust into an unexpected adventurer where she must break a curse that has been plaguing the land of Aloriya and another Kingdom that has been caught up in it. Accompanying her on this journey are Fox, a rather unexpected companion, and a magical Bear who she doesn't really know much about.
Cerys is a surprisingly capable girl who I really delighted in getting to know. I think one thing that I really liked about her was that she wasn't actually an overly ambitious girl (and I mean that in a good way!) an instead focused more on simply wanting to help others and do whatever is right and best for her land and those around her. Along with Cerys is Fox--who is easily one of my favorite characters--and I really loved how Poston developed his character. I won't go into much detail about him because it would lead to major spoilers (although I really want to talk about him more!), so I'll just say that his wittiness was such a delight and his natural chemistry with Cerys was similarly a joy to read. I really loved how the two managed to play off of one another in ways that highlight each one's personality while also contributing to their own individual development as well.
The world-building of Aloriya and the mysterious woods was lush and vivid and I found myself constantly wishing I had some illustrations to go with them to illuminate how beautiful this world was. I loved hearing about Cerys and her father's gardening endeavors in particular, and in fact I feel like I could read an entire novella or something similar purely following them on a day-to-day gardening duties storyline--it's just so beautiful and interesting!
The pacing of the story felt spot-on the entire time. I think Poston did a great job in spending just enough time on each event, as well as just enough time in the kingdom of Aloriya, the woods, and a few other unexpected settings before moving on to a new setting and/or plot point. Her descriptions were beautiful, as mentioned, but they weren't drawn out or excessive and drag the plot down; instead, they bolstered the plot and I helped push the story along by crafting some truly beautiful and exciting scenes, full of wit, some danger, and plenty of adventure.
And lastly, I know I've probably made this book seem very tame and uplifting, but there are definitely some darker moments and somewhat creepy elements--particularly in the woods--that helped give this book an even more compelling note that I personally loved. Dark woods are always my favorite, and this book was no exception to that! I had no idea what was going to be around the corner at any time, which really made this book a great experience.
Overall, I've given Among the Beasts and Briars 4.5 stars! This was a really fun and enchanting story that definitely left me in a good mood whenever I read it.
*I received a copy of Among the Beasts and Briars in exchange for an honest review. This has no effect on my rating of the novel.*