Review: Legacy of Steel (The Legacy Trilogy #2) by Matthew Ward 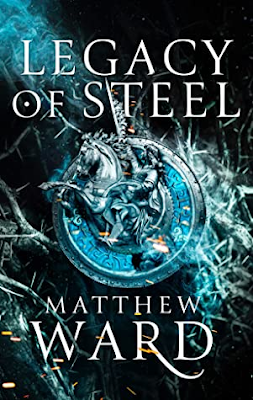 About Legacy of Steel:


"A year has passed since an unlikely alliance saved the Tressian Republic from fire and darkness, at great cost. Thousands perished, and Viktor Akadra - the Republic's champion - has disappeared.
While the ruling council struggles to mend old wounds, other factions sense opportunity. The insidious Parliament of Crows schemes in the shadows, while to the east the Hadari Emperor gathers his armies. As turmoil spreads across the Republic, its ripples are felt in the realms of the divine.
War is coming . . . and this time the gods themselves will take sides."
The Legacy Trilogy is an ambitious one, to say the least. Legacy of Ash, book #1, was a hefty debut from Matthew Ward, and I was impressed to see how strongly this sequel, Legacy of Steel, held up to the epic story and world of the first book.
Legacy of Steel takes place about a year or so after the events of the first book, so there's not too much to get used to and it's pretty easy to get back into everything (also, if you, like me, often forget the, ahem, finer details of a high fantasy story then never fear--Matthew Ward has a great recap on his website as well as character/term/location glossaries and pronunciation guides to help you out! I cannot begin to tell you how appreciative I am that he has all this information available). With sequels, I'm always cautious of whether or not it will feel like a smooth transition back into the story and the characters, but I really didn't have any problems with this one. I really liked how Ward reintroduced us to all of the characters we've come to both love (and not love) from the first book, and the world-building presence was also immediately present.
This is your more traditional epic fantasy in the sense that it has an extremely large cast of characters, which also means that there are quite a wide array of storylines and settings to follow along with as well. I've been consistently impressed by how well Ward managed to differentiate between each character and individually develop each one in different ways. Some have a faster development, and some seem to be going on a slower arc, which I also appreciate. There are also so many different character that it becomes really exciting to explore each one's story, motivations, and desires in ways that oftentimes feel relatable or understandable. It's easy to become connected to the characters and to become invested in whatever fate may befall them. I've particularly enjoyed following Josiri, Viktor, and Sidara's stories, as they all seem to be on such unique and exciting journeys that intersect and diverge in such a myriad of ways.
I think one thing Ward does really well is create a nice balance between high intensity action-heavy moments and those that are more about developing the plot, characters, political tensions, and world-building. Much like the first book, there are a lot of high action events and they do go on for quite a large amount of time sometimes, but they also are written in such a way that there is constant intrigue and scene changes to keep things interesting and worthwhile to read.
And one last thing Ward does extremely well is his world-building. I am constantly blown away by the detail that is included in all of his creations, from the physical environments and settings to the established political tensions and warring groups to the gods and magic that are also a vital part of this entire world. The magic is interesting in this book and stands out quite a bit from other fantasy in some great ways. The gods are very much a part of this world and I like how Ward incorporates them into the world.
My only "negatives" (which are really more just preferences) are that I felt there were sometimes too many POV changes in one shorter section and it felt a bit like whiplash going back and forth between them. In some more intense moments, the quick flashes back and forth were welcome and added to the intensity, but at other times it made it feel a bit more disjointed and took me longer to get back into each particular setting or POV. Along with this, as much as I enjoy following all of the characters, it can sometimes be hard to sometimes keep track of everything.
Overall, I've given Legacy of Steel four stars! This is a really promising, adventurous, and exciting epic fantasy trilogy that I would highly recommend to any fantasy fan.
*I received a copy of Legacy of Steel in exchange for an honest review. This has no effect on my rating of the novel.*