This week I decided to switch back over and participate in Top 5 Tuesday, hosted by BionicBookworm, now following MeeghanReads!

This week's topic is: 2020 Releases I Still Need to Read!
I'll probably be making an expanded list similar to this in December, but I figured this would be a fun one to partake in since there's still time to catch up before the end of the year! These are a just a small selection of the many (many!) 2020 releases that I still haven't managed to read yet this year, all for various reasons. 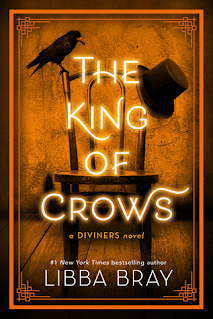 The King of Crows (The Diviners, #4) by Libba Bray
I'm still slowly working through my re-read of the series, but I'm on the third book so hopefully I'll get to this one soon!
Summary: "After the horrifying explosion that claimed one of their own, the Diviners find themselves wanted by the US government, and on the brink of war with the King of Crows.
While Memphis and Isaiah run for their lives from the mysterious Shadow Men, Isaiah receives a startling vision of a girl, Sarah Beth Olson, who could shift the balance in their struggle for peace. Sarah Beth says she knows how to stop the King of Crows-but, she will need the Diviners' help to do it.
Elsewhere, Jericho has returned after his escape from Jake Marlowe's estate, where he has learned the shocking truth behind the King of Crow's plans. Now, the Diviners must travel to Bountiful, Nebraska, in hopes of joining forces with Sarah Beth and to stop the King of Crows and his army of the dead forever.
But as rumors of towns becoming ghost towns and the dead developing unprecedented powers begin to surface, all hope seems to be lost.
In this sweeping finale, The Diviners will be forced to confront their greatest fears and learn to rely on one another if they hope to save the nation, and world from catastrophe..." 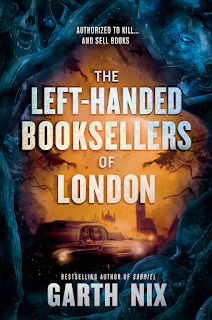 The Left-Handed Booksellers of London by Garth Nix
I love Garth Nix, but for some reason I still haven't had a chance to get my hands on a copy of this. I have  hold on it at my local library, but I think I'm thirty-something on the list, so we'll see when it comes. :)
Summary: "In a slightly alternate London in 1983, Susan Arkshaw is looking for her father, a man she has never met. Crime boss Frank Thringley might be able to help her, but Susan doesn’t get time to ask Frank any questions before he is turned to dust by the prick of a silver hatpin in the hands of the outrageously attractive Merlin.
Merlin is a young left-handed bookseller (one of the fighting ones), who with the right-handed booksellers (the intellectual ones), are an extended family of magical beings who police the mythic and legendary Old World when it intrudes on the modern world, in addition to running several bookshops.
Susan’s search for her father begins with her mother’s possibly misremembered or misspelt surnames, a reading room ticket, and a silver cigarette case engraved with something that might be a coat of arms.
Merlin has a quest of his own, to find the Old World entity who used ordinary criminals to kill his mother. As he and his sister, the right-handed bookseller Vivien, tread in the path of a botched or covered-up police investigation from years past, they find this quest strangely overlaps with Susan’s. Who or what was her father? Susan, Merlin, and Vivien must find out, as the Old World erupts dangerously into the New." 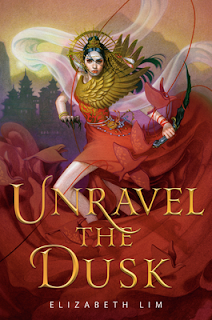 Unravel the Dusk (The Blood of Stars, #2) by Elizabeth Lim
I really enjoyed Spin the Dawn, so I'm bummed I still haven't read the sequel!

Summary: "Maia Tamarin’s journey to sew the dresses of the sun, the moon and the stars has taken a grievous toll. She returns to a kingdom on the brink of war. The boy she loves is gone, and she is forced to don the dress of the sun and assume the place of the emperor’s bride-to-be to keep the peace. But the war raging around Maia is nothing compared to the battle within. Ever since she was touched by the demon Bandur, she has been changing . . . glancing in the mirror to see her own eyes glowing red, losing control of her magic, her body, her mind. It’s only a matter of time before Maia loses herself completely, but she will stop at nothing to find Edan, protect her family, and bring lasting peace to her country. 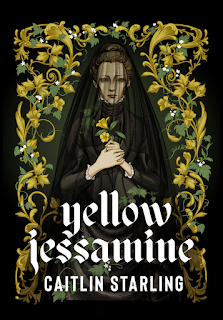 Yellow Jessamine by Caitlin Starling
I'll admit I completely forgot about this one! But everytimeI see

Summary: "Powerful shipping magnate Evelyn Perdanu lives a tight, contained life, holding herself at a distance from all who would get close to her. Her family is dead, her country is dying, and when something foul comes to the city of Delphinium, the brittle, perilous existence she's built for herself is strained to breaking.
When one of her ships arrives in dock, she counts herself lucky that it made it through the military blockades slowly strangling her city. But one by one, the crew fall ill with a mysterious sickness: an intense light in their eyes and obsessive behavior, followed by a catatonic stupor. Even as Evelyn works to exonerate her company of bringing plague into her besieged capital city, more and more cases develop, and the afflicted all share one singular obsession: her.
Panicked and paranoid, she retreats to her estate, which rests on a foundation of secrets: the deaths of her family, the poisons and cures that hasten the dissolution of the remaining upper classes, and a rebel soldier, incapacitated and held hostage in a desperate bid for information. But the afflicted are closing in on her, and bringing the attention of the law with them. Evelyn must unearth her connection to the spreading illness, and fast, before it takes root inside her home and destroys all that she has built." 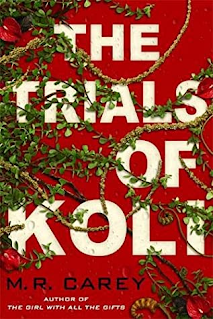 The Trials of Koli (Rampart Trilogy, #2) by M.R. Carey
I've had a copy of this staring at me for quite a while now, I really need to get to it!

Summary: "The Trials of Koli is the second novel in M R. Carey’s breathtakingly original Rampart trilogy, set in a strange and deadly world of our own making.
Beyond the walls of Koli’s small village lies a fearsome landscape filled with choker trees, vicious beasts and shunned men. As an exile, Koli’s been forced to journey out into this mysterious, hostile world. But he heard a story, once. A story about lost London, and the mysterious tech of the Old Times that may still be there. If Koli can find it, there may still be a way for him to redeem himself – by saving what’s left of humankind."
Have you read any of these books? What are some 2020 releases you still need to read?
Posted by Jordan @ForeverLostinLiterature at 2:00 AM