Hello, everyone! Today I'm excited to share with you all my last blog tour post of 2020 featuring Marion Lane and the Midnight Murder by T.A. Willberg! This stop includes a brief summary as well as an excerpt from this fun and page-turning mystery. Is this one on your radar yet? Be sure to check it out--and a big Happy Holidays and New Year to you all! :) 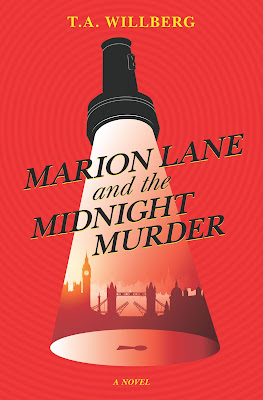 
SYNOPSIS:
“The letter was short. A name, a time, a place.
Marion Lane and the Midnight Murder plunges readers into the heart of London, to the secret tunnels that exist far beneath the city streets. There, a mysterious group of detectives recruited for Miss Brickett’s Investigations & Inquiries use their cunning and gadgets to solve crimes that have stumped Scotland Yard.
Late one night in April 1958, a filing assistant at Miss Brickett’s receives a letter of warning, detailing a name, a time, and a place. She goes to investigate but finds the room empty. At the stroke of midnight, she is murdered by a killer she can’t see―her death the only sign she wasn’t alone. It becomes chillingly clear that the person responsible must also work for Miss Brickett’s, making everyone a suspect.
Marion Lane, a first-year Inquirer-in-training, finds herself drawn ever deeper into the investigation. When her friend and colleague is framed for the crime, to clear his name she must sort through the hidden alliances at Miss Brickett’s and secrets dating back to WWII. Masterful, clever and deliciously suspenseful, Marion Lane and the Midnight Murder is a fresh take on the Agatha Christie-style locked-room murder mystery, with an exciting new heroine detective."

Excerpted from Marion Lane and the Midnight Murder @ 2020 by Tessa Gukelberger, used with permission by Park Row Books/HarperCollins.

T.A. Willberg was born in Johannesburg, South Africa, and holds a chiropractic masters degree from Durban University of Technology. MARION LANE AND THE MIDNIGHT MURDER is her debut novel and launch of her detective series. She currently lives in Malta with her partner.