Review: A Dance with Fate (Warrior Bards #2) by Juliet Marillier 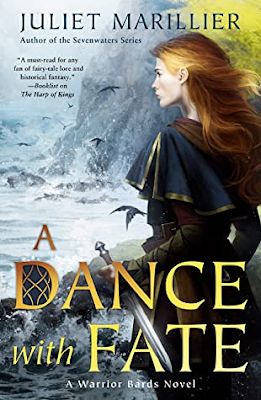 About A Dance with Fate:
"The young warrior and bard Liobhan has lost her brother to the Otherworld. Even more determined to gain a place as an elite fighter, she returns to Swan Island to continue her training. But Liobhan is devastated when her comrade Dau is injured and loses his sight in their final display bout. Blamed by Dau's family for the accident, she agrees to go to Dau's home as a bond servant for the span of one year.
There, she soon learns that Oakhill is a place of dark secrets. The vicious Crow Folk still threaten both worlds. And Dau, battling the demon of despair, is not an easy man to help.
When Liobhan and Dau start to expose the rot at the center of Oakhill, they place themselves in deadly danger. For their enemy wields great power and will stop at nothing to get his way. It will take all the skills of a Swan Island warrior and a touch of the uncanny to give them a hope of survival. . . ."

Last year I read and really enjoyed The Harp of Kings and was so curious to see where Marillier planned to take this story. I was not at all disappointed with A Dance with Fate--and in fact, if anything I think I liked it even more than the first book.  I would also like to throw out a quick warning for discussion of harm to animals--there is nothing explicit or that happens in this book, but there is a big plot point centered around something that happened to an animal in the past.

Some of Marillier's strongest points, in my opinion, are her characters and settings. We follow the three same characters of Liobhan, Dau, and Brocc in this book as we did in the first book, and I always appreciate POV consistency in fantasy series. This time, however, since Brocc has chosen to stay in the Otherworld it is only Liobhan and Dau that are together in the 'regular' world and Brocc is separated in his own. I have really enjoyed following these characters and watching Marillier focus on their evolution as characters through their carefully crafted development. We really get to dive deep into the thoughts and motivations of each character, and in this installment especially we get to observe these characters through some emotionally intense events. Dau, for instance, faces more than a few incredibly difficult circumstances in this book that has must overcome, and his journey from being obstinate and refusing help to slowly opening himself up just enough is exciting to watch. Liobhan also has to learn more things about both herself and others in order to make the best of her situation. Although Brocc's circumstances are noticeably different from Dau's and Liobhan's, he too undergoes his own discoveries to become more at ease with his time in the Otherworld.

The world-building itself is strong in this book, but it's almost more the individual settings themselves that stand out to me. It's safe to say that Marillier has great talent for crafting a scene that feels both real and magical all at once. In the Otherworld, the magical aspect is subtle, yet always present in the way she describes both the people that inhabit it and the way in which the land works. In the regular world, the magic is in her descriptions of the lands and places that the characters inhabit. It's not necessarily that there is actually magic in these lands, but moreso that her creations of them have this effortless comfort to them that is both welcoming and mysterious all wrapped up into one, which is sometimes difficult to understand when some settings are not actually that welcoming.

One of my favorite things about this series and Marillier's writing is the sheer respect and sense of solemnity that permeates the tone of the book. It's both a comfort and a sign of her talent, as I find that this series has been one that I always know is going to be a good read, and that even if something horrible happens in the plot or to a character, I know it's going to be handled in a respectable manner. I'm not sure if I'm conveying what I mean by this accurately, but it basically just feels like a nice break from the relentless intensity of horrors that many other books I read tend to focus on. There's a nice bit of optimism and carefulness that goes into tackling some truly heartbreaking and horrifying things that occur in this book.

The pacing of A Dance with Fate is definitely on the slower side overall, but that's not to say it is without inciting events or a compelling narrative. In fact, I found myself far more captivated by this story than the first book, and I would argue that the first book technically had more large plot events and action. This book, however, had so much of it's intrigue in the smaller details and the overarching narrative that allowed it to follow a slightly slower pacing in order to highlight and fully cover the character development and journeys each character undertook for themselves.

Overall, it's 4.5 stars from me for A Dance with Fate! I really enjoyed this sequel and am now so excited for the third book. This book has such a beautiful amount of hope throughout it that really makes this a special and incredible read.

*I received an ARC of A Dance with Fate courtesy of NetGalley and the publisher in exchange for an honest review. This has no effect on m rating of the novel.*