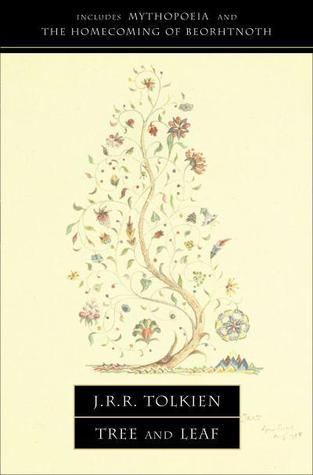 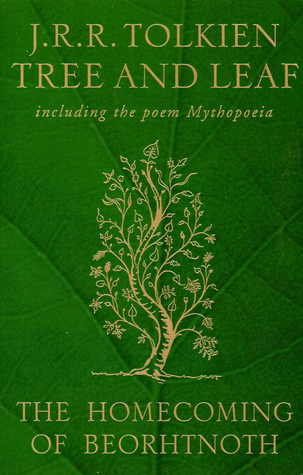 About Tree and Leaf:
"Repackaged to feature Tolkien's own painting of the Tree of Amalion, this collection includes his famous essay, 'On Fairy-stories' and the story that exemplifies this, 'Leaf by Niggle', together with the poem 'Mythopoeia' and the verse drama, 'The Homecoming of Beorhtnoth', which tells of the events following the disastrous Battle of Maldon. Fairy-stories are not just for children, as anyone who has read Tolkien will know. In his essay On Fairy-Stories, Tolkien discusses the nature of fairy-tales and fantasy and rescues the genre from those who would relegate it to juvenilia. The haunting short story, Leaf by Niggle, recounts the story of the artist, Niggle, who has 'a long journey to make' and is seen as an allegory of Tolkien's life. The poem Mythopoeia relates an argument between two unforgettable characters as they discuss the making of myths. Lastly, and published for the very first time, we are treated to the translation of Tolkien's account of the Battle of Maldon, known as The Homecoming of Beorhtnoth. Tree and Leaf is an eclectic, amusing, provocative and entertaining collection of works which reveals the diversity of J.R.R. Tolkien's imagination, the depth of his knowledge of English history, and the breadth of his talent as a creator of fantastic fiction."

This isn't a new release by any means, but I did read it recently and was floored by how much I enjoyed it and took away from it. This collection includes the essay "On Fairy-stories," the related short story "Leaf by Niggle," the poem "Mythopoeia," and the poem "The Homecoming of Beorhtnoth," which was about the Battle of Maldon from 991 AD.

On Fairy-stories and Leaf by Niggle are the two works from this collection that stood out to me the most, though I enjoyed all of them. On Fairy-stories is a really thoughtful and in-depth discussion of what people mean when they talk about 'fairy-stories' and 'fairies' in general. Tolkien's discussion first dives into understanding all of the different interpretations that exists and his statement on what a fairy story actually is, what it entails, and what can be expected from them. He also provides examples of common stories that are considered fairy-tales, but in actuality do not fit that specific category.

In addition to this discussion on what a fairy story is, Tolkien also covers some more disputed topics such as what age fairy stories are meant to be written or told for. In the present day, we tend to associate fairy stories with children, but Tolkien instead explains why they are not necessarily meant for children and that they are, in fact, better understand and often enjoyed more by adults.The other prominent aspect of this essay is Tolkien's discussion on writing and fantasy in general, as well as types of prose that exist, and I think anyone who writes or is interested in reading about the craft of writing and constructing new worlds will take away a lot of incredible valuable information from it.

I absolutely loved hearing Tolkien's thoughts on this topic and how much care he put into the entire essay. This is the first longer form piece of nonfiction that I've read from Tolkien and I've found myself enamored by his voice and method of writing. Of course, I've read The Lord of the Rings and associated books so I know that Tolkien has a wonderful narrative voice, but hearing his nonfiction was just as enlightening and compelling as any of his fiction. He has such a beautiful cadence to his writing as well that makes it easy to keep reading. If you are at all interested in fairy tales or stories, or simply a compelling discussion about people's perceptions versus reality, then I would encourage you to check out this essay.

My second favorite work is "Leaf by Niggle," which is a bit of an allegorical short story about a young artist who wants to work on his art, but is surrounded by people who do not seem to value or care about his art or drive to create it. Niggle was a character that I felt I connected to a lot just from his introduction on the first page, from his general personality to his constant focus on completing mundane tasks that resulted in him never having time for his own art. I won't go over the entire story, but suffice to say this was a really enjoyable and enlightening tale that I think offers a lot of meaning. I have seen mentioned that Niggle may be a sort of Tolkien-insert, so I think that also offers an compelling insight as well. Also, I have a weird love of trees and I think Tolkien does also, so the tree in this book was a beautiful part of the story.

The remaining works "Mythopoeia" and "The Homecoming of Beorhtnoth" were beautiful in their own right, though I'll confess that I'm not sure I understand all elements of the former as much as I would lie, and I absolutely plan to do some re-reads of it in the future. Still, Tolkien's poetry is stunning and captivating and you can tell that there are so many layers to it. The Homecoming of is written in a play format and was more engaging that I might have expected, which led me to learning more about the Battle of Maldon than I ever would've learned otherwise, most likely.

Overall, it feels a bit odd to rate this one, but I'm still giving it five stars. This is a really beautiful, informative, and inspiring collection that demands a slow, contemplative reading of it (and some re-reads to take it in as much as possible, in my opinion!). For anyone who loves literature or reading some beautiful poetry or creative short stories, this is one I would absolutely recommend!

Buy: Amazon
Posted by Jordan @ForeverLostinLiterature at 2:00 AM