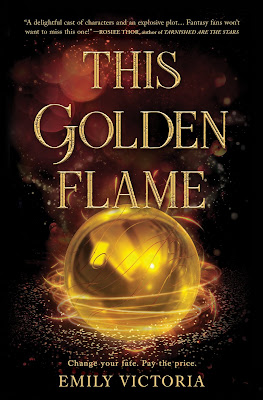 
SYNOPSIS:
“An Ember in the Ashes meets Mask of Shadows in Emily Victoria's #ownvoices debut YA fantasy, This Golden Flame, in which asexual Karis, a servant to the mysterious Scriptorium, accidentally awakens long-dormant automaton Alix, initiating an epic adventure full of magic, rebellion, and finding where you truly belong.
Orphaned and forced to serve her country’s ruling group of scribes, Karis wants nothing more than to find her brother, long ago shipped away. But family bonds don’t matter to the Scriptorium, whose sole focus is unlocking the magic of an ancient automaton army.
In her search for her brother, Karis does the seemingly impossible?she awakens a hidden automaton. Intelligent, with a conscience of his own, Alix has no idea why he was made. Or why his father?their nation’s greatest traitor?once tried to destroy the automatons.
Suddenly, the Scriptorium isn’t just trying to control Karis; it’s hunting her. Together with Alix, Karis must find her brother…and the secret that’s held her country in its power for centuries."

REVIEW:
This Golden Flame takes place in the land of Eratia, a world in which automatons once existed as part of the country's large, dangerous army before being deactivated. Today, members of the Scriptorium work tirelessly to figure out the magic and technology behind how to reanimate these automatons once again. Although this is a fantasy, this is an Ancient Greece-inspired world, with names, cultural elements, and settings that draw influence from the Greeks, which of course was a plus for me.
The story splits perspectives between Karis and Alix, the latter of which is an automaton that Karis is able to somewhat accidentally reanimate. I though splitting perspectives between these two figures allowed for a really well-rounded look at this world and its history from two very different perspectives. Karis, of course, is from the present, so she sees things from the viewpoint of the current world and their perception of historical events. Despite being forced to attend the Scriptorium, Karis actually hates the Scriptorium and wants nothing more than to escape and go find her brother, whom she was separated from years earlier. One thing that I really liked about Karis was that she was able to make her own choices and opinions, even when those choices were enormous mistakes because she actually had to face reasonable and fitting consequences for all of her actions. I loved that Karis was held accountable and that we actually got to see her grow throughout this story. Some of my issues with some YA fantasy lately is how protagonists make consistently poorly thought out decisions and face hardly any consequences--but with this book, we actually see a character learn and grow from her experiences, which was wonderful to see.
Alix is an automaton that was created centuries ago who therefore has a vastly different view of automatons and the world alike. Alix doesn't see himself as a monster or a weapon, and I thought it was so fascinating to explore his sense of identity as he also tried to figure out who--or what--he was. This felt like a similar idea to AI stories in which an AI tries to determine how 'real' they are, and I thought Victoria explored in a very tactful and captivating manner. Alix has real feelings and a personality, so it was particularly hard to see others treat him as a simple unfeeling tool at times, as if there was nothing else alive about him.
The pacing of this book felt strong, and for once I didn't feel like things were too rushed (which seems to be an issue in some YA books lately). I appreciated the amount of time Victoria spent on different plot points and twists, as well as inner monologue sections when we get a chance to really dive into the characters more and understand who they are. I also appreciate the amount of world-building that went into developing this world, although there were times when I still felt like there was something lacking a bit. The world that mostly was a part of the events of the story was well-developed, but I ocassionally felt as though things were happening in select bubbles and we didn't get to explore as much as I'd have liked to. Still, I loved the parts of the world that we did get to explore!
Overall, I really enjoyed This Golden Flame and finding a new YA fantasy to dive into when it's been a difficult genre for me lately. If you like adventure, diverse and entertaining characters, or a compelling premise featuring automatons, then definitely give this one a read.

Emily Victoria lives on the Canadian prairies with her Cavalier King Charles Spaniel, works at her public library, and has just finished her Masters of Library and Information Studies.