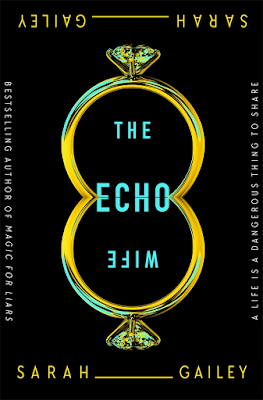 About The Echo Wife:
"Martine is a genetically cloned replica made from Evelyn Caldwell’s award-winning research. She’s patient and gentle and obedient. She’s everything Evelyn swore she’d never be. And she’s having an affair with Evelyn’s husband.
Now, the cheating bastard is dead, and the Caldwell wives have a mess to clean up. Good thing Evelyn Caldwell is used to getting her hands dirty."

The Echo Wife is a short novel at just over 200 pages, but it certainly manages to still pack a punch in that time. I'll be honest--I'm still not really sure how I feel about this book. I loved the premise and the exploration of clones and the process of creating them, but the way the story unfolded was decidedly odd, in both good and bad ways.

This story follows Evelyn Caldwell, a woman who has developed a way to craft clones that are able to become all but identical to the person they are based on. The intriguing plot that arises is when we discover that her husband has left Evelyn for a woman named Martine (not a spoiler, I promise!), who is in fact Evelyn's clone. I'm sure you can already begin to guess at what sort of troubles might arise as a result of this, er, unprecedented action.

The story is told from Evelyn's perspective, and right off the bat I have to say that Evelyn was an incredibly and deeply unlikable narrator and character for me. Fortunately, the way that Gailey wrote her and her narrative was done in such a way that I still very much enjoyed the story and enjoyed reading it from Evelyn's voice, despite her deeply unlikeable personality. I tend to like stories with unlikable protagonists, so this worked for me, but I can see some readers potentially having some issues with it. I can't really blame Evelyn for some of her extreme bitterness and actions, I think any one of us could understand and empathize at least a little bit with the pain and anger that would result if we place ourselves in the same situation. Despite this, there's something off about Evelyn and some of her coldness, and I think that is what really sets this story in motion in the way that it does. She handles some of the twists that arise in ways I don't think many people would, and that is what really makes this an interesting story, if a bit frustrating at times.

Gailey's exploration of clones was especially interesting in this book. I particularly loved her focus on the details of creating a clone and all of the minute details that go into both crafting the initial form and 'conditioning' the resulting body into one that matches the original form perfectly (i.e., Evelyn has to break a clone's finger in order to reset it in a way that matches the original person, or has to create a burn on a part of the body in order to create a scar, etc.). Sometimes these details felt a little heavy-handed and it started to feel a bit too detailed, but I also think in a way that narrative element matched well with Evelyn's own analytical mind that constantly assesses and develops plans and fixes to everything around her.

I also really liked how Gailey explored what it means to be a person and everything that makes a person tic. Creating a clone is not a simple matter, as mentioned above with the details needed for the physical appearance of clones, and it relies a lot on emotional and mental aspects as well. How do you craft a person to have the same manners and outlook on life that someone else has? Where do rights and autonomy ideas come into play? There's a lot to consider, and although Gailey only has time to explore a select few questions in this book, I love all of the ideas and questions it provoked in my own mind as I read it.

A few of my  issues tend to arise with the pacing, which felt a bit slow at times in ways that made me want to rush through the book, as well as with the storytelling itself. Part of the slow pacing occurred near the start of most chapters when we get to share a memory with Evelyn from her childhood. I understand the point of these flashbacks and how they help us better understand Evelyn's present personality and actions, but I also felt as though they really dragged the book to a halt whenever they popped up, which felt fairly often. I like getting to see background for characters, but I feel like books sometimes do this too much to where it begins to take away from the present-day storyline.

Overall, I had some issues with the storytelling and pacing, but I still really enjoyed this book and Gailey's fascinating take on cloning. I've given it 3.75 stars! If you like sci-fi or want to read more about what cloning might be like, then you should definitely pick this one up.

*I received an early copy of The Echo Wife courtesy of the publisher in exchange for an honest review.*